Whatever your romance reading preference -- gay virgin, opposites attract, friends to lovers, or simply fun how-they-met stories -- this collection contains a variety of sweet, contemporary, short gay romances, sure to make you smile.

Rewritten and re-edited, these stories were previously published singly and are available now in one collection!

Contains the stories: Cow Pie Bingo, King Kong vs. The Skinny Pirate, Born to Be Wild, The Straggler, Now and Forever, Moving On, Moving Along, Dropping Quarters, Nevermore, Photo Shoot, and Okay, Then. 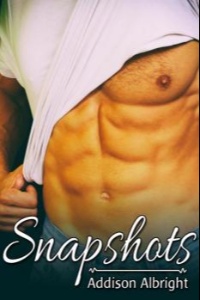 Ted sat cross-legged on the rough, sand-covered beach towel as he watched Madelyn and Harris run toward him, dripping wet, sand covering their little feet. With the sun still high and bright in the western sky, he reached for a bottle of SPF 50 to reapply lotion to their pale skin.

Ted laughed at his daughter. “Again and again and again.” He ruffled her hair as she sat beside him. He squeezed sunblock onto her outstretched hand, and she rubbed it on her legs while Ted worked on her back and arms.

She turned her scrunched-up face toward him, and he rubbed lotion onto her face and neck, then gave her arm a light squeeze.

“All done, toots.” He smiled, and the six-year-old affected a dramatic “oh-I-am-so-put-upon” sigh, then scooted off to shovel sand into one of the buckets.

“I can do my own, Dad,” eight-year-old Harris claimed. He was growing up fast and insisted on doing as much as he could on his own.

Ted winked. “Except for your back, kiddo. I’ll do that for you.” He rubbed sunblock onto the boy’s back, then handed Harris the bottle to finish the rest.

“Daddy,” Madelyn said, “will you help me build the castle? It keeps breaking.”

“Your sand is too dry, Maddie. Fill the buckets with water first, and dump them in the sand you’ll be using.” She ran toward the water with a bucket in each hand.

Ted smoothed out a base for their castle, and Harris dug the moat that would surround it.

Madelyn returned with the water buckets and began mixing the sloppy sand. When the kids happily formed sand bricks and built up their castle walls, Ted lay on the towel and closed his eyes as he listened to their chatter.

A soft sigh escaped his lips as he thought about the fun he’d had with them. They all loved spending time at the beach. Maybe they’d go to the zoo tomorrow, or perhaps see that new Disney flick. Madelyn had dropped at least a half dozen not-so-subtle hints about the movie, so at least one of the kids was sure to be thrilled. He made the most of his weekends with them. Keri was fair-minded, and they were generally able to work out any modifications to the formal custody agreement to accommodate their schedules, but it still seemed there was never enough time with the children.

For this reason alone, he sometimes second-guessed his decision to seek a divorce, but in the end he knew it had been the right decision. He’d never been able to work up the courage to confess the full truth to Keri, and they’d parted ways agreeing that, for whatever reason, there was simply no spark between them.

He’d tried so hard in the early years, pretending an interest where one didn’t actually exist. He’d wanted to feel attracted to Keri, a beautiful person, inside and out. Ted was glad she was the mother of his children, and he was truly thankful she’d found happiness in a second marriage.

A smile tugged at his lips as a certain person came to mind, then he frowned. If only he had a stable relationship, which seemed out of the question. He’d pushed the man away yet again last night. Not literally, of course. No, they’d been plenty close. But once again he’d refused to share contact information or even his real name. How many times had they been together now? Thirty-five? Forty? And how many times had they sought each other out, haunting the same bar, and missed?

Ted’s hand wandered to his hip, where a fresh “love bite” lay hidden beneath his swim trunks. He shivered, visualizing those strong hands holding down his hips.

Living his life openly with this man by his side was a nightly dream, but it was a risk he wasn’t sure he wanted to take. How far would Keri’s reasonable nature stretch? If she knew the truth, would it put his visitation time with Madelyn and Harris at risk? Perhaps he should seek legal advice.

“Mr. Rhoads?” A young female voice brought him out of his reverie. Ted bit back a sigh and sat up to see which of his former students had discovered him. There were two of them, both from his third period history class the previous year.

“Rhonda, Megan, how are you girls? Are you looking forward to high school this fall?” He smiled at them. They’d been good students. They’d always gotten their work done, although they did like to prattle on in class when they were supposed to be working on group projects -- typical eighth-grade girls.

“You girls don’t have anything to worry about. You’re both excellent students. Are you enjoying your summer break?”

He stood and turned, putting out his hand to introduce himself. “Hello, I’m Ted Rhoads. Pleased to ...” He froze, his jaw dropping.

There was a reason he drove an hour each way to a neighboring city when he felt like cutting loose for an occasional night of fun and debauchery, and it was standing right in front of him with a knowing, shit-eating grin spreading across his face. It wasn’t quite the same as the grin the man had been wearing just last night.