Beautiful, confident Tabby Karim has plans for the winter: nab a role in her school’s dramatic production, make the new boy Michael hers, and keep bigoted Heather—with her relentless Ay-rab comments—at bay. When a teacher’s lie and her father’s hastiness rob her of her beautiful hair, her dreams are dashed. The fastest barber in Miami Beach has made her look practically bald.

With all her pretty hair gone, Tabby doesn’t believe she fits the feminine role she’s auditioning for. Michael is still interested in her, but he’s playing it cool. Heather has taken to bullying her online, which is easier to do with Tabby’s ugly haircut. Tabby spearheads Operation Revenge, which proves satisfying until all of her problems deepen. After messing up, she sets to make things right. 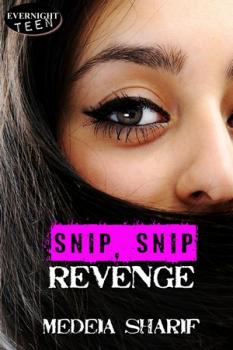 A huge lump grows in my throat and I swallow it with difficulty. Obviously, these men have nothing to do all day but sit here and read their newspapers, so I’m up next. I’m frozen. My limbs won’t move. “Come on now!” Dad says impatiently.

I don’t feel like fighting with him in front of others. In snail-like fashion I glide to the salon chair. There’s a large oval mirror in front of me and I stare at my reflection. I feel outside myself, as if this is happening to someone else. Some other teenage girl with long, pretty hair is getting her hair cut, not me. Raul asks me to lift my hair and he places an apron around me. The black plastic unsettles me. Ever since Dad parked his car, the whole atmosphere has been ominous.

Raul doesn’t even ask me what I want. Dad is giving all the orders. He whispers something into Raul’s ear—I hear the word lice loud and clear, though—and then he says, “Do the fine job that you do on my hair.”

That fills me with dread. Dad’s hair is short. I don’t want to look like him. Raul’s hands caress my hair, and then he grabs all of it at the base, using his fingers as a ponytail holder, and cuts it off in one swoop. My hair is at my shoulders and I surreally watch the rest of my hair clutched in Raul’s hand as if it were the pelt of a dead animal. Raul takes the hair to the back of the shop and throws it in a garbage can. My long, beautiful curls are gone forever.

I stare at the mirror. My hair doesn’t really look that bad. I look cute. It just needs to be evened out. Now that my hair is shorter, Raul wets it with a spray bottle. I don’t think he shampoos hair, furthering my suspicions that this is a men’s only place.

“Raul was voted fastest haircutter in Miami-Dade,” Dad says. The local newspapers have these silly polls about businesses, but I don’t recall reading about Raul among the articles about most authentic Chinese restaurants and best diners for breakfast.

“Shorter,” Dad says, louder than me, letting Raul know he’s the paying customer, not me. Big deal, I could easily pay for this haircut. I should’ve said so before we got in, because now Dad is on one of his power trips, acting like he’s in charge.

“Go on,” Dad says. I see him at the edge of the mirror, looking at his phone instead of paying attention to me. “Cut it shorter.”

“You sure?” Raul asks. Raul, a complete stranger, has sympathy in his eyes. My eyes meet his in the mirror. I also see that I’m shaking with fury, fright, and sadness. Dad doesn’t know shit about what I want. He makes this about him. He wants me to have short hair. But I’m a girl, not a boy. And I belong in a salon, not a barbershop. Raul hesitates, arms limp at his sides.

I’m breathless. Will Raul choose Dad or my sad, tear-filled self? He chooses Dad, raises his hands, and continues to cut in his Speedy Gonzales manner.

“I need to get this call,” Dad says. “No, wait for me…I’ll deal with the client…I’m almost done with a personal matter...” In between talking to one his employees, Dad lifts his head to give Raul more directions. “A little shorter.” My reflection becomes hazy…because I’m crying. I can’t believe this is happening to me. This guy’s fingers are relentless. The gleam of the scissors shimmer right and left, top and bottom. “You’re shaking too much,” Raul says.

“Stop it, Tabby!” Dad orders. “You don’t want to get cut. There’s no need to struggle. Just let’s get this out of the way already. I don’t want to be late for a meeting.”

I want to jump out of the seat and run out of here screaming. My hair looks ugly. I look like a boy. Raul cuts some more. “Daddy!” I say, reverting to a little girl. I’m remembering those times as a child when Dad hit my hand with a ruler or slapped me across the face. I feel trapped by his cruelty and Raul’s quick hands.

Raul takes an electric razor and I feel it graze the back of my neck. “No!” I say. “No, no, no.” I’m afraid that if I move Raul will cut me, but maybe blood will be good for a time like this. I want to die. My hair is grotesque.

I’m stunned by the way I look. My hair is about two inches long, shaggy on top and much shorter on the bottom. What the hell? The razor, comb, and scissors disappear to the side table where Raul keeps his supplies. He takes a neck brush and glides it over my neck to brush away stray hairs. Tears are dripping like bullets down my face. With my fugly haircut and red face, I look monstrous. I’ve lost myself in a few short minutes. I’m no longer me. Where is the pretty face and pretty hair?