You’d think eleven-year old rich kid, Marcus Fleming, has it made, but he doesn’t. He often feels like a disappointment, struggling to live up to his dad’s high standards.

One day, Marcus holds open a door for a very sickly-looking man. The thanks he gets is a sneeze that covers him in thick green slime. Marcus soon discovers that this slime has given him the ability to shoot radioactive mucus out of his mouth and nose. After fine-tuning his abilities, he dubs himself the superhero, Mucus Phlegmball, but is determined to keep his powers a secret.

When mutant squirrels threaten the town, Marcus feels compelled to step up, but worries he can’t handle it alone. He reveals his secret to his best friend, Chunk, and to Dr B., the sickly scientist who sneezed on him, and they agree to work together.

Through radioactive snot-filled time traveling adventures, Marcus is continually challenged and faces many of his fears. Can this insecure young man summon the courage to handle the responsibility of being a super hero? 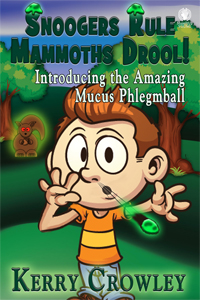 As he headed to school on Monday, Marcus was nervous and distracted because he hadn’t come up with a plan yet. How was he going to get back to the lab to ask questions? Superhero or not, he was still an eleven-year-old, and going places alone was a bit of a challenge. After the morning announcements, Marcus’ teacher explained they had a special guest speaker for science. Marcus almost fell out of his seat when the sickly-looking man from the pharmacy stepped through the door. His teacher introduced the man as Dr. Boogerslinger, which caused snickering from the boys. The girls all turned up their noses and groaned. When the teacher quieted them down again, he explained to the class the doctor was going to be telling them about the work he was doing at a nearby laboratory.

Dr. Boogerslinger gave his talk to the class, going into detail about his work with radiation. Marcus’ mind whirled with all the questions he had for the doctor.

When Doctor Boogerslinger was done with his presentation, he left the classroom and Marcus saw his opportunity slipping away. As nervous as he was, he knew it was now or never. He asked his teacher for a pass to use the bathroom and bolted into the hallway to catch up to the doctor. “Excuse me, sir,” Marcus called out, his palms sweating from fear.

“Yes,” the doctor said, as he turned.

“I need to talk to you, if you have a minute,” Marcus replied, staring at his feet. This was way outside his comfort zone. His stomach was in a knot and his hands were trembling.

The man glanced at his watch and sighed. “I suppose I can spare another couple of minutes,” he said. “What’s on your mind, son? Do you have questions about my presentation?”

“Not exactly,” Marcus stammered. “Let’s go in here.” Marcus headed for the boys’ bathroom. When he got inside, he checked all the stalls to be certain they were alone. “Do you remember me?” Marcus asked, taking a step toward the doctor, who was looking both confused and uncomfortable, pressed against the door as if he was ready to bolt at any moment.

Dr. Boogerslinger adjusted his glasses, staring intently at Marcus and the sudden look of surprise in his eyes told Marcus he did remember him.

“Ever since you sneezed on me at the drug store, strange things have been happening,” Marcus explained. “I think you gave me superpowers.”

“What are you talking about?” Dr. Boogerslinger said. “There is no such thing as superpowers.”

“Then how do you explain this?” Marcus asked, turning to the wall and shooting a big goober out of his mouth. As usual, he had forgotten he had better control over the slime when he shot it out of his nose than when he used his mouth, so the pool was bigger than he intended, but it certainly got his point across.

The doctor stared at the oozing pile and then back at Marcus, his mouth hanging open. “But you don’t appear to be sick,” he finally stammered. By this time, the snot was starting to reek and bubble. “Is this some sort of trick?” the doctor asked, pressing closer to the door.

“No, sir. It all started about a week after you sneezed on me. I like to call them snoogers, you know, like a combination of snot and boogers. I can shoot it out of my mouth and nose,” Marcus continued. He covered his left nostril to demonstrate a farm blow, one of his personal favorites, but the doctor grabbed his arm.

“I don’t need to see it again,” Dr. Boogerslinger said. “Do you feel all right? Are there any other symptoms you’ve been experiencing?”

The doctor stared at Marcus with narrowed eyes, as if he didn’t quite believe him.

“Have you told your parents and seen a doctor about any of this?”

“Uh-uh. I’ve been keeping it a secret. It’s pretty weird and hard to explain to people,” Marcus stated.

By this time, the snoogers were becoming even more active. The snot that dripped down the wall and hit the faucet in the sink was smoking.

“That’s a new one. I’ve never seen it do that before,” Marcus said, gesturing toward the smoke. “Why is it doing that? Do you think it’s radioactive?”

“I have no idea, but I think we better try to find out.” The doctor reached into his inside pocket and pulled out a small vial. With shaking hands, he collected a sample of the slime. “I’ll take this back to the lab and test it,” he said. “Now, we better clean the rest of this up, since we don’t know how potent it is.”

The doctor put on gloves and turned on the smoking faucet to splash water over the slime. They both noticed the smoking stopped and the snoogers that had been hit with water stopped bubbling.

“That’s important to remember, son. The snoogers, or whatever you called them, seem to be neutralized by water. The substance also appears to eat through metal,” he noted, examining the melting faucet. “It doesn’t seem to have the same effect on other types of material, though,” he stated, as he helped Marcus wipe up the goo, which they flushed down a toilet. When the mess was cleaned up, the doctor headed to leave, but Marcus had more questions.

“Do you feed the squirrels at work every day?” Marcus asked, taking the conversation in a completely different direction.

“What?” Dr. Boogerslinger asked, surprised. “What does that have to do with anything?”

“Maybe nothing,” Marcus said, shrugging. “But a weird thing happened the other night and I saw someone feeding a bunch of squirrels outside the lab where you work and was wondering if maybe they were becoming radioactive too.”