Soldier in Her Lap

Trapped by her alcoholic, abusive father, Sophia Carpenter longs to escape her life of drudgery on her father’s dirt farm in Clark Springs, Georgia. Making matters worse, her father’s scared off every man who tried to call on her. She longs for freedom, but with the Civil War raging, even fewer men are available to fulfill her dreams—unless a soldier landed in her lap. Conscripted into a war he never wanted to fight, Lucas Grady is tired of battle and refuses to lay his life down for a lost cause. After a musket ball tears through his leg, he deserts from the ambulance wagon rather than risk a field surgeon’s saw. He barely makes it to Sophia’s farm before collapsing. The wounded soldier’s arrival seems like a dream come true, but first she must save him from his injuries—and her father. As forbidden attraction blooms between them, they will have to struggle to survive. Can their love overcome so many obstacles or will they become another casualty of the War Between the States? 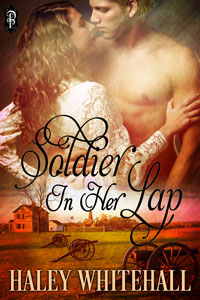 Soldier in Her Lap

Excitement threaded through her. Was she finally getting a man? A handsome, caring and courageous man at that. God had outdone himself when he’d answered her prayer.

“We have to keep this from Papa.” Mr. Grady hadn’t taken the musket with him to the barn. Her old man could come out here and shoot him at any time.

“We can, for now. If that is what you wish, Miss Carpenter.”

Sophia exhaled. “That is what I want,” she said, shifting her weight. If they were going to court, they needed to know more about each other. One question had been plaguing her since the evening she’d sewn up his leg. “I’d like to know about the battle.”

His eyebrows knitted together and he leaned back. “What would you like to know? War isn’t a ladylike subject.”

She didn’t care whether it was proper or not. Papa had never treated her like a lady. “How did you get shot?”

“Charging the Yankees,” he replied, a playful undertone to his voice.

She’d learned he wasn’t much of a talker, but she wanted a better answer than that. Maybe she should start with a more direct question. “What regiment are you from?”

Good. I can work off that. “So you’re from Georgia, then?”

“No, miss. Tennessee. But I transferred here.”

“Oh. All right, but why did you end up on my doorstep instead of with your regiment?”

“Not much left of the Fighting Fourth, miss,” he replied curtly. Color drained from his face, and a haunted look filled his eyes.

She swallowed hard. It had been wrong to bring up the difficult subject now. They’d talk more about this later, when he was ready.

“One good thing came out of that battle,” he said, his gaze lifting to hers. “I met you.”

Her heart flipped. Yes, she was Cinderella, and he was the nobleman coming to her rescue. Talk like that would charm her silly. Already she had a hard time keeping him off her mind, continually pausing in the middle of working in the garden to glance over at the barn.

One thing continued to bother her though. He seemed to be holding something back. Why hide something unless you were ashamed or worried or afraid? Maybe all three. Except Mr. Grady didn’t seem the type of man to do something wrong—always acting the perfect gentleman. “Mr. Grady, seeing as how we’re courting, I think it would be all right if you called me Sophia.”

Mr. Grady grinned; his eyes no longer looked haunted. “In private, of course, Sophia,” he said. “And you may call me Lucas.”

“I look forward to getting to know you better, Lucas.” She had so many questions. Hopefully their next conversation would be smoother. This one had been as bumpy as a toad’s back.

When the clock struck twelve, would her dream come true or fade away?