Harry Lennon and Zeke Hodge spent many wonderful years together, but five years ago, Harry made the grim decision to admit his life-partner to a permanent housing facility at Saint Keller’s Nursing Home for the Aging. Riddled with Alzheimer’s, Zeke barely recognizes Harry anymore. As he tries to help Zeke recall small occurrences in the forty-two years they shared together, Harry wrestles with his worst fear: watching his partner slowly deteriorate in front of him.

During Zeke’s last months at Saint Keller’s, Harry notices his partner gradually slipping away. Zeke grows more violent and disruptive with the orderlies, and becomes a stranger with whom Harry cannot identify. When Harry succumbs to one of life’s harsh realities, what reason can he find to keep living? 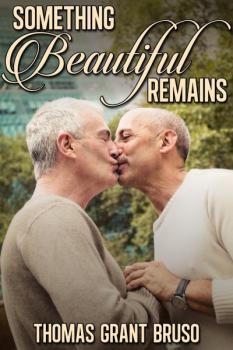 Outside, darkness thickens around him as Harry speed walks to his car to escape the downpour. He sits behind the steering wheel and feels tears swell in the corner of his eyes. He wipes them on his shirtsleeve and his frazzled nerves get the better of him. He tries to unwind himself so he can drive safely to work, but he is incapable of moving. He listens to the rain on the hood of his red Corvette. It sounds like pebbles against the metal.

Harry stares over at the photo album that lies in the passenger seat. He thumbs through countless pictures of Zeke and him, now distant and decomposed memories for Zeke; but for Harry, they are a commemoration of joyous times.

Harry, hands trembling, finds the opening to the ignition, turns the key, and reaches for the radio dial to mute the relaxing sounds of Mozart. He stares out into a gloomy afternoon and thinks of Zeke. He looks beyond the sheet of rain to the brick structure of Saint Keller’s nursing home and feels his heart pulse hard inside him. He heaves a sigh to find solace. He closes his eyes, feels himself start to cry, recalling a far-off moment many Christmases ago:

He had ordered Zeke a catalog item that year -- a cobalt-white-striped cotton sweater. They sat in their home on the settee by the window, sipping cocoa. Harry stared into Zeke’s hazel eyes. He was more lucid back then, more affectionate. Harry handed Zeke his gift, wrapped in soft silk cloth, a red bow to commemorate the special occasion. Zeke liked fancy bows, collected them over the years. As Harry placed his mug on a coaster beside Zeke’s he saw euphoria in his partner’s eyes that morning.

Harry, too, couldn’t help but lose himself in the moment. He felt his own eyes mist over.

He unwrapped himself from the afghan Zeke had given him that morning as a gift, and cuddled beside his partner on the sofa. Feeling Zeke tremble in his arms, Harry pulled him closer. “I will take care of you,” Harry whispered.

Zeke opened Harry’s package and pressed the sweater against his chest as if modeling it for him. Harry watched as Zeke stroked his thin, white beard, a feature that made him appear spryer in old age. “I love it,” Zeke said, and he kissed him. Reaching for more tissues and rearranging himself on the sofa, Zeke handed Harry another silk-wrapped package.

“Zeke, I thought we weren’t going to go all out this year.”

Beaming, Zeke said, “This is special.”

Harry grinned. He untied the gold ribbon from the box’s edges and opened the package, poking through silver tissue paper. Underneath, he pulled out a photo album, engraved with the message: “To my darling Harry. May time not weaken but strengthen our love.”

Harry pulled Zeke into a hug and kissed him. He could feel Zeke’s stubble brush against his cheek. Zeke whispered into Harry’s ear: “Forever.”

Without a Trace (MM)
Lynn Hagen
In Shelf
$4.99
Tweets by
sirenbookstrand