Janie Lovell is a brilliant project manager working at the Madrid office of a leading consulting firm. Beautiful and aggressive, she has what it takes to be successful in a man’s world and is respected by colleagues and competitors alike. During a trip to the Seattle headquarters, the last thing she expects is to fall in love with the sexy new CEO, Dennis Mitchell. During an action-packed weekend in Canada, the seeds of love are sown.

Destiny reunites them in Paris again a few months later, where Dennis declares his love for her. After going their separate ways, Janie finds out she’s pregnant but keeps it from him, not wanting to condition his love. Feeling lonely and miserable, she decides to go back to her native Australia. Before leaving, she spends a few days at her summer house in Ibiza, where she seeks comfort in Diego, her ex-husband. Dennis discovers her secret and unexpectedly appears on the scene, engagement ring in hand, to find her in Diego’s arms. He is outraged and leaves, convinced the baby isn’t his. A year later, they meet again at the Melbourne office and Dennis sees his son for the first time. Realizing his mistake, this time he’s prepared to overcome his fears to win her love back.

But will she accept his marriage proposal? 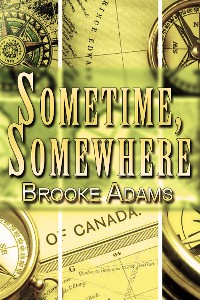 Heat Rating: Steamy
Word Count: 18,601
1 Ratings (3.0)
Erotica Fiction
In Bookshelf
In Cart
In Wish List
Available formats
PDF
ePub
HTML
Mobi
Cover Art by Valerie Tibbs
Reviews
It was OK. But it seemed to be missing something. I'd equate it to a poor Harlequin Presents.
Grace
Read more...
Professional Reviews

"Dennis and Janie are great characters; both strong and assertive people but with a wonderful depth of emotion...a quick romance with just enough tension to leave you wondering what will happen and enough romance to keep it sweet and fun... an enjoyable story and recommended for anyone looking for a nice romantic interlude."

"SOMETIME, SOMEWHERE is the gentle love story of two powerful business people finding love without losing their identities. This book takes the delicate subject and produces a realistic, at times humorous, and certainly steamy romance. Find a comfy chair on a rainy day, settle in and enjoy this wonderful romance."

"[Adams’] major characters are so realistic and such endearing individuals it was as if I was reading about two of my own friends. The sensuality was subtle and effectively... This is a great read for an afternoon or evening. It will give your heart a pick-up and leave you with a smile... I highly recommend it."

Janie walked over to where he was standing by the window, gazing into the Parisian night. There was a full moon, its haunting silvery light spilling into the room.

“This brings back memories,” he said, his voice barely a whisper.

“I know… of a weekend in Canada. God, it seems almost unreal now,” she said, her voice also subdued.

Dennis turned to her and drew her gently towards him, cupping her face in his hands. “You have no idea how much I’ve missed you, Janie,” he said, bending his head and brushing his lips against hers. “I was going out of my mind wondering if you felt the same way about me.”

She shuddered at the warmth of his touch and his sweet musky scent.

“I missed you too, Dennis.”

He drew his head back to look at her. She was gazing longingly into his eyes. He could hardly believe it. Was this beautiful, sexy woman really in his arms again and looking at him like that? He kissed her again, softly parting her lips with the tip of his tongue and searching for hers. She felt a flame blaze through her as he held her tightly and, feeling her response, deepened the kiss into a slow, lingering caress. Janie felt her knees buckle. Dennis slipped his hands underneath her sweater, caressing her back and the sides of her breasts with his thumbs. She moaned softly and he felt his desire grow stronger as he held her by the hips and pressed her against him so she could feel his pulsating need for her. He pressed his lips against her ear, his stubble slightly scraping her skin.

“I want you Janie. I’ve wanted you since the first moment I saw you,” he said, his voice husky with desire.

Dennis suddenly released her, running a hand through his hair in a nervous gesture.

“Forgive me Janie. I get the feeling that I’m rushing things, but I just can’t control myself when I’m with you,” he said in an apologetic tone. “I don’t know… maybe I’m imposing myself.”

Janie put her arms around his waist, resting her head on his muscular chest. It felt so good just to hold him like that.

“You’d only be imposing yourself if I didn’t feel the same way about you… but the fact is I do,” she said, without looking up at him.

Dennis put his arms around her tightly, almost crushing her against him, and kissed the top of her head. He lifted her chin with his hand and kissed her, lightly at first, and then deeper, gently stroking his tongue against hers, savoring the sweet taste of her. She could feel the hard length of this cock straining against his pants and the warmth of his skin under the thin cotton shirt was almost too much to bear. Janie was almost trembling with the need that he aroused in her, engulfing her in waves of dizzying heat. Dennis picked her up and in three strides reached the bed, laying her down gently on the duvet. She pushed her laptop and papers to one side and watched mesmerized as he unbuttoned and took off his shirt, revealing the taut muscles and tanned skin that she had only been able to imagine until now and had so longed to touch. Broad, muscular shoulders tapered down to trim hips, a nicely rounded ass and long legs.

In a word, he was stunning.

He lay down next to her as she slipped off her sandals and sweater, revealing a black lace bra, her full breasts straining against the delicate material. With a sharp intake of breath, Dennis cupped each mound in his hands and softly kissed them, rubbing his thumbs against her already hardened nipples and setting her nerve endings on fire as darts shot through her limbs and down her abdomen. He drew her close again and kissed her passionately, leaving a trail of burning kisses along her jaw and down her neck and shoulder, while gently removing the bra strap and continuing down the curve of her breast. Janie gasped as he drew her nipple into his mouth and felt his soft, warm lips. His tongue teased it until it became so hard that it ached. He did the same with the other nipple while slowly unzipping her pants and slipping his hand beneath them, caressing her abdomen and continuing downwards, seeking her moist entrance. She bucked as he slid one finger inside and then two, slowly and rhythmically sliding them in and out, while his thumb sought her button between her folds and gently rubbed it, taking her to unimaginable heights of arousal.

Dennis knew she was almost ready to peak and stopped caressing her long enough to pull down her pants and underwear, leaving her naked on the bed underneath him, quivering with desire. He knew she was ready for him and the temptation to sink himself inside her there and then was overpowering but he forced himself to wait, wanting her to come first. Janie moaned as he opened her folds and then felt his moist tongue on her clit, arching her back as he slid his fingers into her once again. This time he didn’t stop, drawing the engorged bud into his mouth and relishing her taste and scent. She clutched at his hair, her body tensing as waves of unbearably intense pleasure seared through her and then convulsing as the orgasm slammed into her.

A Bride for Two Babes (MFM)
Edith DuBois
In Shelf
$5.99
Tweets by
sirenbookstrand