Lily learned magic from the last of the kingdom’s great sorcerers who disappeared a year ago, leaving her with a baby and with the responsibility of finding magical solutions for everyone’s problems. She’s overworked and exhausted, and not in the mood to have the king’s disreputable illegitimate half-brother knock on her door, demanding her help. But the king is ill, and the kingdom needs her ... and the king’s brother might not be as dreadful as the rumors say.

Will knows his own reputation: the schemes for the throne, the plots and politics, the decadence of his bedchamber, and the lovers paid off with rubies. He’s worked hard on that reputation, after all -- it ensures that he’s aware of all the Court intrigue, and can protect his kindhearted younger brother. He can’t protect his brother from a magical illness ... but he can find the last powerful magician in the kingdom and beg for her aid. And he’ll promise her anything she wants in return ... 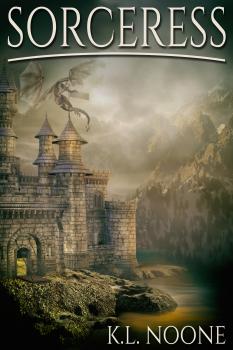 Her world narrowed over those hours to the central ceaseless threads of a tapestry: the bitter-bright scent of herbs and magic in the air; William’s presence, coming and going in the room; the ever-present awareness of her own child’s breath sleeping or waking.

And the dying king on the bed. Lily did everything she knew how to do.

By the end of that first day she also knew that it wasn’t enough.

She held yet another unsuccessful attempt at a healing tea, uselessly. What little Henry consumed had no apparent effect, and she felt ready to cry. Her head ached and her hands ached, hopeless and exhausted and wrung out. The kingdom leaned on her shoulders, and her shoulders weren’t strong enough.

William took the almost-full cup from her, hands warm against hers, and set it on the nightstand. He looked down at Henry and then up at Lily’s face; he turned and left the room.

Lily looked at Henry, who did not stir; she whispered, “I’ll be back,” and went to find his half-brother.

Who was not hard to find: only out in the hall, surrounded by aging hook-nosed oil portraits with ostentatiously bejeweled frames. He’d leaned back against the closest wall, unguarded and broken for an instant: not a scheming potential usurper or the beating heart of viperous Court politics, but a man watching his younger brother slide away.

Lily came to lean against the wall beside him. “Are you all right?”

“Of course not,” he said, and slowly pulled his expression into some sort of order, but the habitual facade of control hid nothing. He looked at her curiously. “You’re slipping.”

“I’m --” Lily put a hand up to her hair, felt coarse brown strands instead of the illusory golden silk she’d come into the palace wearing. “Oh. Thank you.”

She owed him some honesty, some vulnerability, in turn. “None.” Besides, he’d already seen her pathetic cottage, her disastrous life; she had nothing left to hide.

One corner of his mouth tipped up, that expression she was coming to recognize. “You’d fit in well here. We all wear masks.”

“They say you want the throne.” The words came out before she could stop them.

“Oh, I do. I always have. And I would be better at it than Henry, he’s far too trusting. He thinks the best of everyone.”

“And you think the worst.”

“I’m practical. Henry would give away the entire Treasury if someone looked at him with sad eyes and said it’d make them feel better. He knows it, and I know it, and the entire Court knows it. I’d be a stronger king.” He said this matter-of-factly, without arrogance.

“Would you,” Lily said, careful.

“But I don’t want it like this. Not at the cost of his life.” He eyed her, amused. “I wondered how long it would take you to suspect me, by the way. Most of the Court think I’ve poisoned him.”

A Leather and Tea Morning (MM)
K.L. Noone
In Shelf
$1.99
Tweets by
sirenbookstrand