‘SPANKING HER CURVES 3’ is the latest release from international bestselling author Alex Anders and is for those who love short stories where full-figured women, not only get their gorgeous guys, but get a little spanking on the side.

As a kid, Maggie Rivers was unstoppable when she had her best friend Ryan by her side. There was nothing that she couldn’t do. But putting on weight one summer, she hid herself away losing her gorgeous best friend. Watching Ryan become a built, sexy man, she thought he was gone forever. But when he gets a work transfer that lands him back into her life, he brings with him a sexy secret that transforms Maggie’s life into her greatest fantasy. 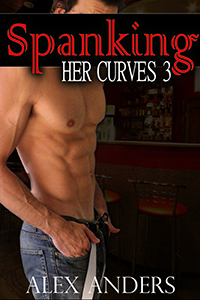 Ryan chuckled. He shook his head at her, and then gestured toward his lap. “If you’re so sure I’m not gonna do it, why don’t you come on over here.”

It took her a moment to move. Her heart was racing and her knees were wobbling from the alcohol and the sexual excitement. She stared down at him sizing him up. She didn’t think that he would do it. It was a silly idea. She was a grown woman. And the Ryan who she had watched growing up, would never do such a thing.

However, the way he was looking at her, and something about the thought of him spanking her, was definitely arousing. The thought was actually taking her breath away. And feeling her loins tingle for the first time in years, she had to have more.

Maggie stepped in front of his chair, putting a hand on the table to steady herself. Her heart was pounding, and a part of her was wondering just how drunk she had to be to act so ridiculously. But it was a small part. A larger part was feeling more alive than she had felt in years. It was like the young, mischievous Maggie was waking up after a long sleep.

“Here I am,” she said, looking him right in the eye.

“Mm-hm.” Ryan moaned smiling up at her. “You like it standing up?”

Maggie giggled, unable to hold his gaze. “Standing, bending,” she said, still giggling. She bent forward carefully, since the giggling and alcohol made her off balance. “It doesn’t matter since you won’t do it anyway.”

Maggie never took her eyes off of him as she got onto her knees beside him. Almost daring him as she leaned forward, she wiggled her rump taunting him. His reply came with a sharp swat across her round ass.

Maggie gasped. She was stunned. She hadn’t been spanked since she was a little girl and it took a moment to process. The spank had left her feeling warm, but not just on her rump. She felt a tumbling feeling deep inside and the skin on her neck crawled as if covered with ants. She had forgotten how good it felt. 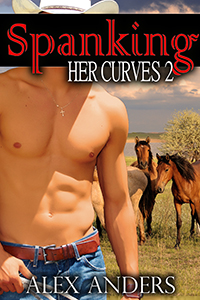 The Alpha Takes a Mate (MF)
Sam Crescent
In Shelf
$4.99
Tweets by
sirenbookstrand