Sara accosts Lord Wolverton in his bedroom late at night, intending to shoot him in the groin so he’d never again rape an innocent girl. Fortunately Wolf overpowers her, since she finds he is not the villain she seeks. They embark on a journey that will allow Sara to seek the real rapist and Wolf to hunt a spy. When Wolf and Sara join forces to decode a message with deadly intent, the spy’s vengeance turns on her. Wolf, fearing for her safety and in desperate need of her help, persuades her to marry him. But how safe will she be from him?

Their love leads them both into danger as the assassin pursues them. Will their courage and their love be enough to help them, as well as Lord Wellington, to survive? 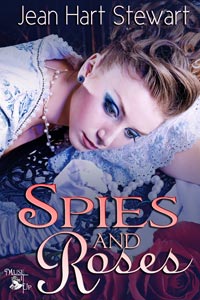 True to his word, he returned not only for dinner but in time to change to a navy blue velvet coat and a white waistcoat sprinkled with silver flowers. Lace frothed at his wrists and neck, and his fawn-colored trousers fit without a wrinkle. She trusted he had no idea of the jubilation flooding her when she’d heard him open the door to his room. He had kept his word. The most beautiful man she’d ever seen could be trusted. He’d kept his word.

He pulled out her chair in the dining room, his quirky grin appreciating the fact she chose to sit immediately at his right instead of at the end of the long table.

“A much more sensible arrangement, my dear. Not only is it easier to the servants but it keeps you close to me. Never having a wife before, I don’t always think of matters as I should.” He dropped a light kiss on her hair and then seated himself.

“You look delightfully happy, and that pleases me,” he said.

The first course was an asparagus soup so delicious Sara exclaimed, “This is fabulous! I can’t place the herb in it. I wonder if M. Bertrand would give Aunt Lavinia the receipt.”

Josh looked at her reflectively, but said nothing, being occupied in calling for a second serving of the soup. The beef medallions were exactly right, pink in the middle and with an exquisite sauce on the side. As the rest of the delicious meal was served, Josh applied himself to finishing everything put before him. He finally laid down his napkin with a sigh of repletion.

“All right, you little witch. What did you do? Double Bertrand’s salary?”

Sara looked so smug he was forced to laugh. “Or did you find a new cook already? Certainly this cannot be M. Bertrand.”

“Certainly this is our M. Bertrand. We didn’t mention salaries. Your household just needs a woman’s touch.”

Josh glanced at her and then away. His whole body stiffened at her words and the thought of this woman’s touch. In places where he craved to feel it. Would she start slowly, and then sweetly learn to know his body? Surely she couldn’t know how provocative her words and her dancing eyes were. Well hell, it was pure sadism if she did!

He’d promised not to force her into his bed. But he’d said nothing about seducing her into it. He could see her staring at him and forced himself to speak lightly.

“If this is Bertrand, then you are indeed either a witch or a magician. Which is it, can you tell me? Or does your coven require silence?”

Her laugh rang jubilant at his admission of how the meal pleased him.

“Shall we go into the library for a game of chess, Josh? It is my night to reach for the stars, so be prepared.”

“One moment, wife.” Josh called William over to the table. “Will you please convey my sincere compliments and thanks to the cook for a superb meal?”

He turned to Sara with a grin. “Now, if you can stop giggling, we’ll go see how good you are at chess. Take note please. Even stubborn males can learn.”

She won one of three evenly fought games, and sat pouting.

“I should have done better,” she said disconsolately. “I wasn’t quite up to my game.”

Josh rolled his eyes. “Saints preserve me if you are often better than tonight. I should have expected excellence, though.”

“Thank you, my lord,” she said, dimpling up at him. “I’ll beat you yet. But now I think I’ll retire. I’ve had a busy day getting your servants in order.”

“You’re a baggage. I’m not ready to turn in yet, but I’ll walk you to your room.”
She turned quiet but didn’t flinch when he reached for her hand and led her to her bedroom door. As she started to open the door, he caught the handle and held it closed. Turning her into his arms, he whispered huskily, “I promised not to force you. But I said nothing about kissing you, which I intend to do frequently. At least once a day. Hopefully much more. And certainly every night.”