Enda McCaffry has seen and done many things in over two hundred years. He's been exiled, hunted, and recruited as a pirate. He's developed a multimillion-pound gold bullion and stone dealership and is now Alpha of a very unusual pack.

But one thing eludes him, the one thing he is desperate to find—his spirit walker.

Daniel King has finally escaped from under his father's dominant, dismissive thumb. It was supposed to be a new start, but something very strange is going on. Iron gates open without any help. Everyone talks about walking ghosts. There are some very strange scents in the air, and as for his body, it doesn't feel like his own anymore.

Now Enda has found him, he knows he can never let Daniel go, but getting him to accept this new world and his place beside him is going to be damn near impossible.

Heat Rating: Sextreme
Word Count: 38,629
17 Ratings (4.3)
Paranormal Vampires/Werewolves Alternative (M/M, Gay)
In Bookshelf
In Cart
In Wish List
Available formats
Mobi
ePub
PDF
HTML
Cover Art by Harris Channing
Reviews
Wow. I read this book in one day. I loved everything about this story. It had everything I wanted. A variety of paranormals, M/M, magic use, pirates, Scotland, and the length allowed me to find an anchor. This allowed me to be swept along with the main couples story and I was able to feel every tear or laughter with them. I have gotten all the available books Lady Quinn has and will get all the books in this series because I am that hooked on her Spirit Walker stories. XD
animelover
nice start to a new series look forward to see where it goes
cwbylvr
Read more...

Enda stood outside The Slug. His spirit walker was inside. The scent had gotten stronger and stronger the closer he got. Kash and Jez arrived, looking at him curiously.

“What if he’s just passing through?” he asked the door.

“No one passes through Kashmerle, Enda, you know that. The roads to Kashmerle don’t lead anywhere. We’re on an isolated peninsula. You can only get out the way you come in and the gates are enchanted.  Even the fishermen are down to two boats out of Singing Sands,” Kash tried to explain.

“Yeah, he must have moved here,” Jez said. “Any new businesses come to town recently, or jobs advertised?” he asked.

“No new businesses apart from Sunan’s jewellery enterprise ‘Klassic Designs.’ Though, both Willow’s restaurant and W&P’s are after staff,” Enda told them. As Alpha, he knew what was happening in their territory, but trusted the individuals on who they hired, keeping in mind the feelings of the pack. Before each full moon there was an open forum where people discussed what was going on. That was how he knew those details, but the next one wasn’t for another week, so he reckoned that would be when he’d find out more.

“Well, it’s probably one of the new employees,” Kash said.

“Him, God I hope so.” Enda opened the door to a packed Slug. “Shit!” he said as he pushed his way in.

It was his walker. He could smell the scent on people’s clothes. He growled under his breath. He did not like his walker’s scent all over these other men when it was not on him.

“What’s your problem, man?” one man asked who carried a lot of this walker’s scent.

“Mine!” he roared, shoving the man against the wall.

“What the hell!” the man yelled, but Enda was past caring. He surged forward when suddenly, he saw him. And boy was it a him. His hair was a golden-blond colour with tiny highlights of white that you could only see when they shimmered in the light. His face was slender and held the most beautiful sky-blue eyes surrounded by long, breathtaking lashes. Enda felt he could lose himself in those eyes. He had a slim, perfectly straight nose beneath lips, not too full but definitely kissable.

Enda strained to get a better look at his walker’s body but it was obscured by the patrons in the pub. I need to get to him, he thought as he felt the spirit bond begin. The bond was a three-stage process which started when you first encountered your walker. As shifters were immortal and their spirit walker may not be, the legend stated the spirit will walk from soul to soul until it combined with its other half. The second stage was a simple kiss to join the mind and finally sex to join their bodies so their hearts beat with the same rhythm. Simple really but there were rules or rather time constraints. Once the process had begun you had to complete all three stages before one complete cycle of the moon, beginning whenever the next full moon was after the initial process.

The man he had pushed to the wall suddenly came back at him with a punch, hitting Enda right on the jaw. Being distracted was not something that had happened to Enda before, and it had been many years since he’d been landed with a punch. He came back at the man roaring. The fact he smelt of his walker was not helping. Within seconds the man was out cold on the floor, but by this time everyone was getting involved. Five minutes later there was a very loud howl. Helen was not a happy barmaid.

“Right now, boys, put away your claws, fangs, and any other offensive weapons, go back to your drinking, or get out of The Slug.” There weren’t a lot of lasses in Kashmerle and most were mothers, but Helen was one of the exceptions, and as yet no one had dared to cross her. The fact that she could shift into the largest dragon you could imagine probably helped.

Enda shot to the back of the pub, but it was empty. Had the young man gotten involved with the skirmish? Enda swung round, scanning the room full of disgruntled gay men. Anyone who thought they were weak would get one hell of a shook in this neck of the woods.

“That was fun,” Kash said, grinning. “Shame it finished so soon.”

“Baby, there is no wrong way,” Enda said, turning again and pulling Daniel into a passionate kiss. Daniel’s lips were swollen from earlier, but he would let Enda kiss him all day and he wouldn’t complain. Enda’s tongue slid across the roof of his mouth, tasting every part, pushing his senses into overdrive, and turning his body to mush. Yes, he could do this all day. Daniel caught his tongue and sucked hard, pushing his hard, leaking cock up over Enda’s hip, leaving a trail of pre-cum across his thigh. Enda pulled away, turning back, and pushed his ass in the air for Daniel. Daniel rubbed those hard, muscular globes dusted lightly with that dark, smooth hair. He leaned in and kissed each firm cheek, giving each a bite before moving on.

“Yes!” Enda moaned, pushing his ass farther towards him. Daniel rewarded him by licking his tongue down Enda’s back and into his crease, stopping when he circled his dark rosette. “Oh God yes, baby, I love that.” Encouraged, he continued licking and nibbling at Enda’s puckered hole, loving the musky taste and scent of this man. Slowly, as Daniel laved his hole, it began to relax, softening under his curious attention. He firmed his tongue and speared it into his hole.

“Ahh, yeah, oh, baby, that feels so good.” Not bad praise for someone who had never done this before. He pulled back and did it again, only this time pushing deeper. Saliva slid out of his mouth and coated Enda’s entrance as he fucked that tight ass with his tongue.

“Please, baby, I need you in me, now!” Enda begged. Daniel couldn’t believe it. This powerful man both in his business and home life was begging to be fucked. Daniel was so turned on his cock was continually leaking pre-cum.

“Left bedside drawer,” Daniel answered, desperate to penetrate his lover. Enda reached out, stretching his glorious body in front of Daniel. Daniel had no choice. He had to run his hands down Enda’s sides, pressing his fingers gently into the firm muscles. Enda suddenly huffed and scuttled away.

“You’re ticklish.” Daniel grinned and chased after him, reaching just above his hips, sliding his fingers around really gently.

“No I’m not, stop it!” Enda laughed, wriggling away from Daniel. “No! Aunty, granddad, uncle, cousin!”

Daniel stopped. Looking at Enda, he raised his eyebrow in question.

“It’s uncle. I can never remember which one you shout when you want someone you stop,” Enda answered.

Daniel laughed. “Come on, big guy, let me love you.”

Enda’s eyes went from a dusty gray to dark, swirling clouds in seconds. “Oh yes please, my love.” He gave Daniel the lube, which he’d been holding, and turned once more. Daniel smiled. He’d squashed the whole tube out of shape. Squirting a little over his fingers he gently spread it over Enda’s sensitive hole. Feeling it relax, he slipped a finger in. He swirled it round before quickly adding a second. Enda moaned and pushed back on his fingers. Daniel scissored them inside before pushing in a third. Pushing in deeper, he twisted his fingers around until he felt that small bud of nerves. Trailing his fingers over the nub again and again he watched as Enda writhed and moaned, bucking every time he passed the spot.

“Now, Daniel, I don’t want to come without you inside me.”

Daniel put a little more lube in his hand and slid it up and down his cock. Placing it at Enda’s opening, he rubbed gently over the dark rosette. He watched it relax, almost begging for him to enter before he slowly pushed in. 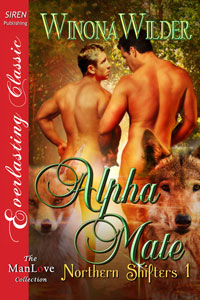 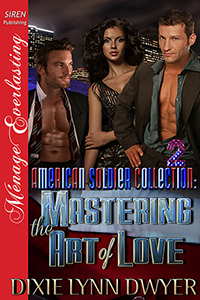 Raining Frogs: A Tale of a Troubled Love (MMM)
Lynn Stark
In Shelf
$4.99

Mine at Midnight (MM)
Leah Blake
In Shelf
$4.99
Tweets by
sirenbookstrand