Quiet and imaginative, Derek O'Reilly spends a lot of time watching a movie in his head. His fiancé Nathan wonders why Derek hasn't taken any interest in their wedding planning, and Aunt Fran -- his spiritual guru -- would like to know when her guilt-tripping nephew became a kept boy. When she drops Derek's childhood journal on his lap, he's forced to remember the name he's been trying to forget since he was twelve years old. Nicolai Lund.

Weeks before Derek's engagement party, a chance meeting with Nick catapults Derek into the past. But Nick isn't that seventeen-year-old rebel anymore. He's a man hardened by invisible scars. A man struggling with grief.

As Derek reads through his childhood diary, he realizes what Nick was to him, still is today, and yet might be ...

NOTE: This edition has been expanded and substantially edited. 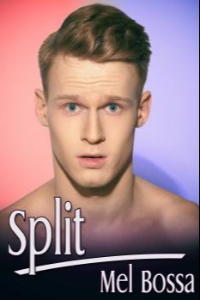 Finally today, Nick and I were together again. I decided to take the vacation time they owed me at work and use it to get my life in some kind of an order. Today was Monday and Split was closed. When Nick called, I threw my coat on and left the condo without even turning the lights and TV off.

This afternoon, we lay in bed together.

In that parallel universe disguised as a loft on Du Port Street.

"It tickles." I twitched.

"No ... be still." Nick's mouth, softer than cashmere, moved across my stomach. His eyes, like two giant Ulysses butterflies fluttered above my skin, spying on me. "Feels nice, no?"

Nick believed that sexual desire was strongest at the edges of our erogenous zones, and he was demonstrating the power of his theory. When his lips skimmed my inner thigh, I let out a small groan.

Silence was key. Had to hear and feel every breath. "Sorry," I said.

Nick flashed a smile and tucked a loose strand of hair behind his ear. "It's okay." He stretched out next to me, nestling his face into the fold of my neck. "You're still too focused on what your cock wants."

He kissed my ear. "Yeah ... I don't know, something feels tense in there." He'd gently pushed his finger into my stomach.

My body stiffened against my will. "Sorry," I said weakly. He was right. I was tense.

"Would you stop apologizing all the time?" He lifted his head and looked straight at me. "It's nasty for your health."

"Hey, look at me." Nick's blue stare leafed through the most hidden pages of my heart. "Why did you beat yourself up that day? Remember? You hit yourself."

I nibbled on my lip. What could I tell him without revealing everything?

"Why?" he insisted softly.

"And was it that? What happened to you, Nick?" I wrapped myself around his beautiful chest and squeezed him almost desperately.

"Tell me." We faced each other, staring in each other's eyes. "Talk to me, Nick."

"I want to. I -- I really do." His face was so sad. "But every time I come close, something chokes me. I can't talk about it." He inhaled sharply and shook his head. "I can't, O'Reilly. Not right now."

I caressed his face. "Okay. Okay." I hesitated and then said, "Nathan wants me to go to Milan with him. I have to give him an answer."

"Of course." Nick curled his fingers around a strand of my hair, raising it to the pale light filtering through the room. "He'd be fucking crazy not to want you there with him. Every day. Every night." His voice shook. "He'd be a fool not to want to wake up to your wicked green eyes. Those eyes that probably make him feel like he's paid his dues. Like he's finally done with living off God's fucking redemption crumbs." He tensed. "Are you gonna go?"

"Look, I need to take care of something. It's something important. I'm going to be out of town for a few days. I don't have a choice."

I did. I held him all afternoon, and then I watched him sleep, making silent promises to him.

Whatever had happened him or whatever he'd done, I wouldn't leave him. Wouldn't forsake him.