A new take on Cinderella...

His wicked stepfather is trying to drive Kegan off his family’s ranch… He promised his dying father to always be there to protect his mother. But when she leaves on a cattle buying trip, his stepbrothers join in to bully and overwork him. Can he hang on until her return? And even if he does, how can he tell her that her new husband is evil incarnate? The only bright spot is Cole, a handsome neighbor he’s admired from a distance.

He’s new in town, and his parents are holding a rodeo… It’s not easy to meet new people in an established ranching community, but a rodeo will draw everyone in and give Cole an opportunity to make friends and show his skills in an arena they all understand. Maybe even get to know someone special.

A mystical medicine hat stallion walks into Kegan’s life…. It’s not long before they are the talk, and mystery, of the rodeo. The only thing more daunting than keeping his identity secret is how Kegan is going to balance all this with his draw to the man of his dreams. Will Cole end up being his magical prince, or is Kegan going to find himself left in the dust? 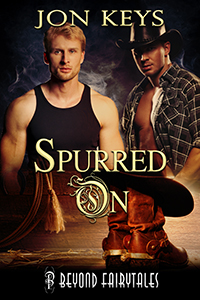 An hour or so later, Kegan stood in the driveway watching Alec drive away in the final rays of sunshine. Alec had offered to give him a ride to the rodeo, but he’d turned him down. Once the pickup disappeared from sight, he walked into the house and worked his way to the dark back room he called his bedroom. He flipped on the light and clenched his jaw at what he found.
His clothes were strewn across the room. Some were ripped, but all of them looked and smelled like they’d been stomped on by someone who’d just walked through the holding pens after they’d worked cattle. They were smeared with mud and cow shit.

“Dammit to fucking hell! The assholes!”

He stomped through the room, kicking piles of clothes out of his way in a blaze of fury. Everything he touched needed to be patched, washed or, more often, both. This settled it. Brent and Seth were out to make his life miserable. The question had become, what was he going to do about it? They seem to have done a good job of taking away his choices.
He began to straighten the tiny basement bedroom. A few minutes later, the job became so discouraging he dropped to the bed and sighed. Kegan lost track of time as he thought through the last months. The sound of a horse nearby shook him from his desolation.

He forced himself from the bedroom, tired of being the one who was crapped on around there. He stomped through the empty house, his anger as fierce as ever. Another nicker drifted to him, and his focus shifted to the present. He opened the door to find a horse standing beside the porch. A beautiful Paint stallion with classic medicine hat markings.

Kegan eased down the steps and held one hand toward the horse, watching him closely. The animal leaned forward, sniffed him, and then snorted.

“Hey, big guy. Where did you come from? If a medicine hat had appeared in any of the BLM herds around here, we’d have known.”

The horse tossed its head, the black and white markings shimmering in the sun. He didn’t shy as Kegan moved closer. The horse’s only reaction was the rippling of thick muscles as it shifted its weight.

The horse froze in place, studying Kegan as he moved closer. He reached out, resting his hand against the stud’s silky skin. It nickered at the touch but didn’t move. As he ran his hands over the animal, he marveled at how calm the stallion was. This was one of the steadiest horses he’d ever come across.