Cold War ... Hot Spies. It’s the 1960’s. Unbeknownst to the world, a secret international organization is working behind the scenes for world peace.

Nikoloz, a Russian agent, has his doubts about his American partner, Vincent. The man is his exact opposite: hot-tempered, impulsive, and an incorrigible playboy. Will they form an effective team?

Their latest mission: find and destroy a secret laboratory producing a new gas weapon. A small town has already been used as a testing site.

Will Nikoloz and Vincent be able to locate the lab in time to protect more innocent lives? Can they get in and destroy the gas without getting caught? And can they resist the attraction they feel for one another? 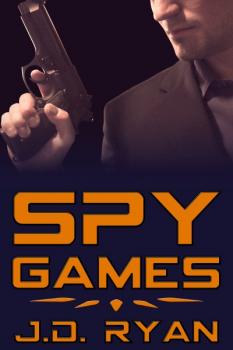 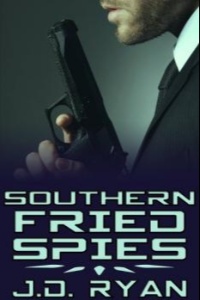 Mr. Alexander slid a file folder across the table to each of them. “Your next mission, gentlemen.”

“Exactly, Mr. Donauri.” Mr. Alexander pressed a button on the panel at the head of the table, and a projector whirred to life. On the wall over his head, a photograph appeared. “This is Spearfish Manufacturing, supposedly a maker of oxygen tanks. In reality, they are involved in the development of a new type of weapon. F.I.S.T. has converted an old canning factory for the purpose.”

Nikoloz had been reading the file. “Zombie gas? Really, sir, is that not something that belongs on your late night television?”

Mr. Alexander pressed another button. A second photograph appeared, this one taken from above, perhaps from a low-flying airplane. It seemed to show a group of people standing in some sort of town square. “This is as close as our operatives could get to the town of Green City.”

Nikoloz and Vincent studied the photograph, then glanced at one another. Vincent’s face showed the puzzlement Nikoloz felt on his own. Mr. Alexander continued. “The entire town seems to have been exposed to this new gas. Watch the people in this series of photos. They were taken during several flyovers by an agent posing as a barnstormer.”

The images flashed onto the wall. “There is no difference in the position of any of those people,” Nikoloz said. “Are you certain that you received the proper photographs?”

“I assure you that those are different photos taken at vastly different times. The people simple stand there without moving.” Alexander’s brows furrowed. “We have sent two agents to investigate, and neither have returned. We suspect they have fallen victim to the gas as well.”

Vincent rose for a better look at the photograph. “You want us to rescue those people?”

“No, Mr. Lowe. I’m afraid those people are beyond help unless we can locate an antidote. We have determined that it is made in that factory, some twenty miles away.”

“And you want us to take care of the factory?”

“We do. The factory is in an isolated location, you see, so the two of you should be able to get inside and destroy the factory.”

Vincent returned to his seat to flip through his folder. “When do we leave?”

“Tomorrow will be fine. You will need to stop by Section 7 for your equipment.”

Nikoloz studied the photograph. The people did look odd. Instead of gathering in little groups, they seemed to be standing listlessly alone, each looking in a different direction instead of at one another. “So they just stand around until someone tells them to do something? Like hypnotism?”

“Evidently it is more alarming than that. Agent Nelson seemed quite unnerved by whatever he had seen. Before he disappeared.” Mr. Alexander tapped a finger on the folder in front of him. “You’ll find a blueprint of the old canning factory, as well as what little we know from overhead surveillance. Report to Section 7 and then take the night off.”

Nikoloz held the door for Vincent, As soon as they were alone in the elevator, Nikoloz opened his folder again. “We must come up with a plan, my friend. This new gas sounds like a particularly nasty sort of weapon.”

Vincent reached out and closed the folder. “We’ll come up with a plan -- after we take the night off, as our esteemed employer has ordered.”

“Nyet. We must study the blueprints.”

“We do that on the plane, my friend. I think better on my feet.” Vincent shoved Nikoloz out of the elevator at Section 7. “I also think better after a relaxing night on the town.”

Nikoloz rolled his eyes. He should have thought of this, not expected his partner to leave on a mission without relieving his sexual tension. “Fine, I will study. Please try to be ready for the plane trip tomorrow.”

“Nyet, my friend. You’re going to start your new training tonight.” Vincent’s cheek dimpled. “I’m going to teach you everything I know.”

“That should not take long.”