Mitchell Tanner is trying to live the straight life. Three years out of prison, he's working a regular job, living in his sister's basement, and doing the occasional side job for some connected guys up in Chicago. But, he's flailing in a relationship he can't quite figure out. Paul's a cute kid, right? A college guy so he's smart, but if he's so smart, what's he doing with Tanner in the first place?

An afternoon at the lake turns into a chilly confrontation, and Tanner struggles to get the whole human relationship thing. Can he figure it out before Paul gives up in disgust? Or will he go stag the rest of his life? 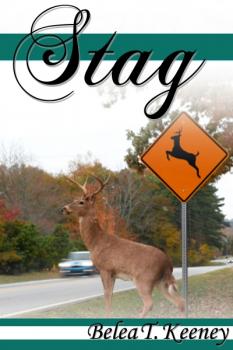 Mitchell was dreaming -- something about alligators and deer in the water, the fawns’ spindly legs kicking through the dim murk, and there were alligators in with them, and that was bad, oh very, very bad -- when he was flipped off the lounger. Dark water splashed up his eyes and nose. He slapped at the sand with tight hands, pushing himself up, quick, quick, quick.

Paul stood over him and crowed. “We’re ready to rumble!” Clark stood a few feet away, smiling.

“I don’t think so.” Tanner stood in water nearly knee-deep, trying to keep his balance. The water tugged at him, a cool sheet of edgy pull.

Paul bent to try a wrestling move but Tanner pulled the lounger up in between them. He looked straight into Paul’s blue eyes. “Don’t even think about it.”

Paul brushed it away, grinning, clearly enjoying the tease. He tried to wrench away the lounger but Tanner held it high. The metal squeaked as they tugged it between them for a few seconds. He let Paul pull a little too hard and then let go. Paul went sprawling in the shallow water. Clark bent and splashed more water in his face. Paul laughed.

Brianna squealed from the shore." Uncle Paul fell down!”

Tanner trudged out of the water and heard a murmur from Kathy. He listened for Paul, pointedly not watching. He knew it was coming, felt Paul’s energy gather before hearing the splash of the water as Paul ran toward him.

Too bad. Tanner turned and stepped to the side just as Paul bent, intending to swoop Tanner off his feet. Tanner was quicker and stronger and had him in a prison-yard arm lock before Paul could catch his balance. He saw the milli-second of unease in Paul’s eyes but then the kid relaxed and took the fall with grace. The sand puffed up around them as they tumbled to the ground, half in the water, half out.

Tanner tugged Paul’s right arm across his neck and clamped down on his wrist. It was a pretty effective pin -- for civilians -- and Tanner straddled Paul’s waist, knees tight around his sides. He leaned down, seeing the flush of Paul’s face, the soft wash of freckles. A sweet rush of fear arousal coursed through Tanner, just that little zing of hotness, but he let it go. It was meaningless. “I want your attention here, and I’m not fucking kidding. I’m not going in the water so stop with your little game. Got it?” He pushed Paul’s wrist down knowing it would tighten down Paul’s arm uncomfortably on his neck. “Got it?”

Paul gave him a half-smile. “Got it.”

“No, I mean, do you really understand? No more. You wanna play little wrestling games, we can play later but no more here.”

Paul turned his head sideways and sucked in a mouthful of the filthy lake water. He flipped back and spit-fountained it up onto Tanner’s neck.

Paul went utterly still beneath him. His eyes flared wide then something in them went cold and gray. The pink on his cheek surprised Tanner; he didn’t think he’d hit him all that hard but then Paul had really light skin and that kind of stuff showed more, like the grip marks on Paul’s hips and the bites on Paul’s neck some mornings ...

Paul’s voice shook. “Get off me. Get your hands off me.”

“Why’d you push me like that? No more with the water shit now!”

“You pushed me!” Tanner rose and backed away -- a smooth lion out of the reach of the injured zebra’s back legs. He felt his other senses come back as the adrenaline seeped out of his system. He watched Paul sit up and heard Clark breathing hard and Brianna’s chirpy voice. “Mommy, Uncle Mitch hit Uncle Paul!”

Tanner looked around. The other beachgoers eyed him warily then their gazes fell off. A couple edged their kids away. Kathy stared at him, her mouth tight. Brianna squirmed in her grip.

Paul kneed himself up then bent and splashed some water over his face. With his hands on his legs, he looked like a runner taking a breather, that was all, just an athlete who’d pushed himself too hard and too far. He was fine.

The Lynx Who Purred for a Sidhe Prince (MM)
Scarlet Hyacinth
In Shelf
$2.50
Tweets by
sirenbookstrand