Addie Ruben divorced a year ago. Though she’s had a year to recover, she struggles with self-worth and the mistakes she’s made. So when she returns to Barley Hill where she grew up, she discovers that she isn’t the only one who’s changed. Her best friend TJ isn’t content to sit on the side and wait any longer. He’s going to claim Addie once and for all. When his roommate Cale joins in, Addie gets a little more than she bargained for and the town gossips have set their tongues to wagging.

Addie learns to trust her judgment, which was shaky to begin with, in order to fight off the town naysayers, keep the board of education from firing TJ and Cale, and defend her newfound confidence before the whole town. Fortunately, she has two men at her side who love her through it all, and this time Addie isn’t afraid of what the future holds. 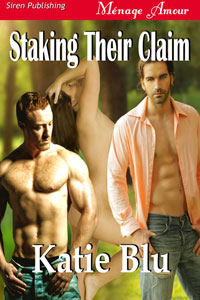 Heat Rating: Sextreme
Word Count: 50,769
22 Ratings (3.9)
Contemporary Menage a Trois/Quatre
In Bookshelf
In Cart
In Wish List
Available formats
Mobi
HTML
PDF
ePub
Cover Art by Jinger Heaston
Reviews
An excellent book, I hope there will be more from this talented author
Jlg29
Iloved this story! The characters were true personalities that made you understand how the three worked. Even the busybodies, the naysayers and the supporters in the community were true to life. I enjoy stories that you can relate to real life even when they are fiction. I believe it encourages readers to take chances and to stand for what they want in their real lives. Thank you Katie for bringing life itself into this story.
Tink
Read more...
Excerpt

TJ pulled up, and Addie barely waited for the SUV to stop before leaping out and taking her first deep breath of frigid, pine-scented Barley Hill air.

She twirled slowly in the middle of the driveway. TJ’s eyes filled with her. Flakes dotted the air, and Addie lifted her face, childlike, to the sky. The breeze nipped her cheeks, turning them a healthy pink as she spun. A giggle leapt from her mouth. Of all the images of her locked in his mind over the years, he knew he’d never forget this one.

Her long brown hair spilled off her shoulders and down her back. The bright curls moved with her. She looked delicious, all wrapped up like a candy—Addie in her brown suede coat with white trim.

TJ laughed. “C’mon. Let’s get you inside. I’ll come back for your luggage in a minute. Your mom would kill me if I kept you from her.”

Addie hugged herself. Her smile was wide, and her big brown eyes twinkled. “I’ve always known you were afraid of Mom.”

Addie walked quickly ahead of him and up the four wide steps to the front porch. TJ loped to catch up with her, knowing what she didn’t. Mrs. Ruben had hooked mistletoe on the porch.

She reached for the storm door as TJ caught her elbow and spun her around, straight into his arms. She looked up at him, eyes wide with surprise and a bemused smile on her lips. Yeah, this is exactly where she needed to be, he thought.

He cuddled her closer. “I forgot to warn you.”

“The mistletoe sneak attack.” He wiggled his eyebrows at her and watched as awareness dawned on her upturned face. She glanced overhead, her lips parting slightly when she saw the greenish sprig.

When her gaze returned to his again, still slightly uncertain, he leaned in and rubbed her nose in an Eskimo kiss. Addie giggled, threw her arms around his shoulders, and nuzzled him back.

Girding himself for her reaction, he dipped lower, capturing her lips in a soft kiss. Addie froze. He pulled back enough to gauge her expression, then thought, to hell with it, and decided to kiss her the way he’d wanted to for countless years.

He cupped her cheek with one hand, holding her steady. At Addie’s sweet gasp, he settled his mouth on hers. Her lips were smooth as warm silk, her breath like forbidden honey as he traced the seam of her lips, seeking entrance.

Addie pushed his chest. Hard. TJ let her go. Hurt and accusation darted at him from her eyes.

“Don’t. Don’t do that again,” she said, her voice shaking with emotion.

“I just—Merry Christmas,” he muttered, feeling like a dick.

He’d wanted to be with her for so long. It wasn’t like Addie’s return to town meant he had a shot. He understood that the dynamic of their relationship had always been as good friends. But he’d hoped there could be more.

She was home. Unattached. Free to date whomever, and he’d wanted to be that nameless one who had the privilege of showering her beautiful face with kisses and monopolizing her free time. He’d waited too long last time, and someone else had snapped her up before TJ had known he’d lost his chance. He wasn’t going to wait this time.

Addie’s smile disappeared. He’d been a moron. No, a jackass, to assume on her. She’d never led him on. He’d had no reason to think things had changed between them. But…

She glanced over her shoulder at the front door. Planning her escape? Folding her arms across her chest, she turned her attention back to him.

She lifted her chin, looked him directly in the eye. “Wasn’t it? Here comes Addie, home from a failed marriage.”

“If you thought that was pity, I did something wrong.”

“Hold on to the table top, Addie. When you feel like you’re going to come, don’t hold back.”

TJ drew the pattern of her pussy with the tip of his tongue. Her hips jerked toward his face. How had she not known this existed?

A small guttural groan, barely stifled, caught her off guard. She opened her eyes and saw Cale watching them with hooded lids and flushed cheeks. She stiffened. It was enough to cause TJ to glance behind. To her surprise, he didn’t stop what he was doing. TJ seemed to taste her with renewed vigor.

Thought clouded. She should cover up. She should make TJ stop. She should do something. Cold Cale was watching TJ perform a very intimate sexual act on her, naked in their kitchen.

But she didn’t. God, she couldn’t.

Her eyes locked on him. Though she knew she had to be in the least-attractive position, and fully on display, Cale couldn’t take his eyes off her.

Obsidian hair slashed forward over one unnervingly pale-blue eye. Cale seemed transfixed. TJ’s lips captured her pussy in a hot, sucking kiss. Addie heard her impassioned cry as though from a distance. Her knees quaked, and TJ pushed a finger into her aching body.

He yanked his tie and undid his button-up shirt. Then, fumbling too long with his pants, he unzipped them and pulled out his long, heavy cock. His hands shook. His intent gaze moved between her panting breaths and TJ’s skillful tonguing.

Her knees almost gave way completely when TJ rubbed the front of her channel with firm strokes, finding a bundle of nerves that splintered her attention between what Cale did and what was being done to her.

Cale stroked himself with one hand while awkwardly pushing his shirt off and flinging his tie across the room. The very disorderly disrobing of such an orderly man, overcome with lust for her, gave her a sense of power.

TJ had eased his onslaught. Having almost brought her off, he retreated her from that delicious precipice. “Can he help you stand?” he asked her cautiously.

Cale immediately quit pumping to take a step forward. He stopped abruptly, gaze moving between her and TJ.

Excitement zinged along her nerve endings, drugging her inhibitions. She still wondered at the daring. Two men? Her best friend and a guy who she was pretty sure hated her? Hate her or not, he was definitely turned on.

TJ’s thumb idly coasted around and around her clit. The noises she made when he touched her! God, they’d be so embarrassing later. Yet the same sounds she found so painfully revealing, they seemed to crave.

Cale seemed to understand better than Addie what the true message was, and she fleetingly wondered how often they must’ve shared lovers before.

She couldn’t remember him ever calling her by name. She licked her lips as TJ’s thumb took another breath-stealing pass. He was keeping her aroused, she realized, without seducing an answer he wanted from her.

Cale, with his pale-blue eyes and black hair. His tall, muscular build that exceeded TJ’s height by at least another inch. Cale, whose breath had quickened upon seeing them, whose cock bowed drunkenly erect, waited for her permission to move.

His will to stand still and give her time seemed to crack. He took two steps toward her. “Please. May I touch you?”

“How do you want to touch me?” she asked, blushing as the brazen words slipped from her lips.

His nostrils flared. His intent gaze met hers. He ran a shaking hand through his hair. “However you let me.”

“Can he hold you?” TJ asked her a second time.

“Can he touch you?” TJ pressed. His thumb made another circuit.

Cream leaked from her. TJ gave her a wink and a knowing smile.

“Yes,” she breathed. Two men. Oh, God, she’d just agreed to have sex with two men. Two impossibly sexy men who should be way out of her league.

“Condoms are behind her on the table,” TJ told him.

Cale nodded, shucking his pants, shoes, and socks until he stood as naked as they. Then he carefully moved her from the table, until her naked back pressed his naked front. TJ shifted into the new position. Cale hooked his foot into the rung of a chair and dragged it over. He sat, pulling Addie onto his lap. Cale rubbed her pale thighs, noticing that TJ leaked pre-cum as he watched.

Cale parted her knees to hang on the outside of his legs. Then spreading his own legs wide, her pussy flowered open, slick and pink. Her muscles clenched as she looked down at herself and must have realized just how exposed her succulent cunt was for both men’s viewing. 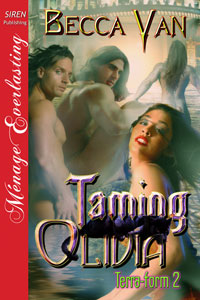 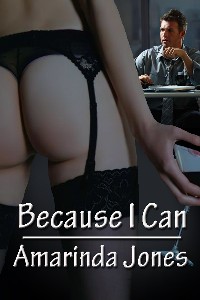 Because I Can
Amarinda Jones
In Shelf
$6.99