Jason’s sexual awakening comes in the middle of the War Between the States when he expresses his desire for Billy, an eighteen year old soldier from Pennsylvania. Upon finding his boyhood farm in disarray after discharge from the Army, he decides to head west and start over by joining his brother Zeke in California. Zeke had reunited with Dirk and the two are establishing themselves as vintners in the Napa Valley.

Jason’s profligacy includes sex with Tom–a travelling salesman from back east, Ling–the vineyard’s Chinese business manager, Gustavo–a Mexican pressman in the wine-making process, and two young but sexually experienced French sailors. Zeke and Dirk are pleasantly surprised when Jason turns over a new leaf and becomes romantically, as well as sexually, involved with Carlos, a sexy Hispanic newcomer to the estate’s laborers with a mysterious past. Carlos is reinventing himself in response to his family’s ostracism due to a misinterpreted episode with a local curate.

Starting Over is the fourth book in the Frontier Brothers series, which also includes Soaring with a Hawk, Missing Aaron, and Seeking Zeke. This final story has almost as much raw sex as the prior three combined while preserving the historical setting and adding another romantic twist. 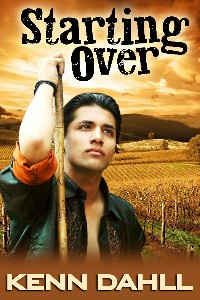 “Cripes! I didn’t know it was that big! You better not be thinking of putting that thing where nature never intended.” Jason tore off his clothes as he admired Jim’s endowment. “Damn! Your balls are like hen’s eggs, and they hang so low!” He knelt on the dirt floor to better scrutinize the objects he was in awe of.

“Suck on them, please!” Lust for his friend strained Jim’s voice. Jason knelt on the dirt floor and tentatively licked Jim’s pendant ball sack. The curly black hairs tickled his tongue. “Ohhh! Yes! Take them in your hot mouth! Please!” Jim squirmed from the sensations of Jason’s tongue rasping over the skin of his scrotum. Jason sucked one then the other of the New Yorker’s balls into his wet orifice. Try as hard as he could he was unable to retain both in his mouth at the same time.

“Lick my hard pole!” Jim begged. The organ in question had enlarged to a full ten hard inches.

“Please. It’ll feel real good for you too! Please, for a friend.”

“Alright. I’ll give it a try.” Jason ran his tongue up the rigid shaft then down again, repeating the motion several times as Jim groaned with pleasure. His legs vibrated from the proximity of ejaculation.

“Oh no! Give me a break. Take it in your mouth and bring me release!” Jim pleaded. Jason capitulated and covered the head of Jim’s massive weapon with his luscious lips just in time to receive a voluminous amount of Jim’s semen. Blast after blast flew into Jason’s mouth and down his throat as Jim found relief.