Chad Benson, a rugged construction worker, has always had his way with women until a mysterious, irresistible visitor blindfolds and seduces him in a steam room. She compels him to make an ominous promise to accept the consequences of their union, whatever they might be.

For the first time, Chad becomes obsessed with a member of the opposite sex and roams the health spa, seeking the red-haired girl who he believes is his seducer. The totally new experience of falling in love is an emotion he'll desperately need when he faces a deadly evil. 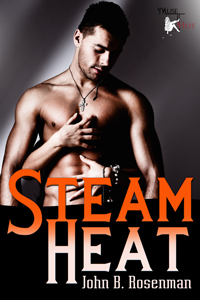 After a good hot spray, he entered the steam room, finding it empty. Climbing in his swim trunks to the top level of the multi-tiered wooden bench, he looked around. Heavy steam filled the air, partly obscuring his view of the pool through the floor-to-ceiling window. At best, he could make out only a few swimmers.

Ah, the heat felt good! He'd sweat a bit and decide who he'd see this weekend. Maybe someone kinky like Michelle.

Lying down, he covered his eyes with his towel. His chest rose and fell in the hot, humid air.

The door opened and closed. Listening, he could hear no footsteps. How odd. Was the person simply standing there? As he started to remove his towel, a hand caught his.

It was the redhead! Obviously, she'd seen him watching her and had dumped her loser before finding out his name. He grinned.

"No, it could prove dangerous. After all, I might be Medusa."

He laughed, imagining her lovely face. "Hey, come on. If you looked at Medusa—"

"Shhh. Don't even say it." Fingers slid behind his head, tying his towel securely so he couldn't pull it off. A moment later, he felt sharp nails glide down his chest and stomach and start to remove his trunks.

"What's the matter? Don't you like to live dangerously?"

What was with this girl? Having her strip him while he was blindfolded put him at a decided disadvantage, put her in control. What’s more, they were practically in plain sight! Any moment someone could come in.

Something in her voice stilled his protest, soothed it away. "Okay," he shrugged. "Only you get to peek, and I don't. It hardly seems fair."

Her hand took his and glided it along a smooth, bare thigh, up her stomach to her breasts.

He caught his breath. She was naked!