An overdose of steam tosses a disgruntled ghost back into the present. A successful brothel owner in her former life, Heidi Labeidi materializes in front of Edward Brady, an eccentric mad scientist.

Edward and Heidi become acquainted. He takes her out in public and discovers a shocking truth. No one else can see her. After a public catastrophe, Edward’s partner, Barron Capwell, shows up on his doorstep making demands. Relieved to discover his partner can see his houseguest, Edward considers what to do with the outspoken dead madam.

Heidi has a few ideas. A ghost is pretty assertive after thirty sexless years have come and gone.

Eager to please Edward and Barron, Heidi offers her assistance, but it comes at a price. Once the men realize she’s the only thing standing between their future and potential demise, Barron and Edward succumb to Heidi’s advances and she fulfills their every desire.

Note: This book was previously published with another publisher. 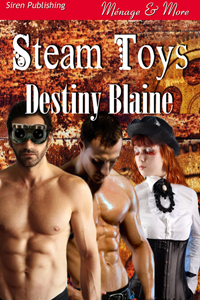 They fooled around on the terrace then took her inside. Everywhere their lips would fit, they’d kissed.

Heidi felt like she’d absorbed more smooches in the past hour than she’d ever received in her lifetime. Just when she thought the delicious pampering was over, Edward slipped between her legs and tongued his way into her slick passage, sipping and slurping, wiggling his tongue between her folds until she was crazy, lost, and oh so addicted.

She rode out one orgasm and grasped onto another. Edward wasn’t a selfish lover and wasn’t as greedy as Barron.

When Edward placed her on her knees, turned on his back, and wiggled between her legs, she saw the positioning from a mile away. Seconds later, she fell to her stomach, practically smothering Edward’s face.

He moaned, used two fingers to spread her lips, and then indulged in a feast, licking his way inside her while Heidi took advantage of placement, struggling to pull Barron’s thick crest between her lips.

Once he shifted his body weight, she took a strong grip, and Barron wasn’t about to hold back. He thrust between her cheeks, stroking her face with his palms while allowing her opportunity. She felt him all the way at the back of her throat.

She still wanted a spanking. Arching her back, Heidi shook her bottom until Barron reached across her hips.

He smacked her behind, and she choked out her muffled cries, stilled by the dick sliding across her tongue. Barron must’ve appreciated the vibrations against his shaft. He smacked her ass again, and this time she bucked, the burn too hot to resist.

Edward secured her with his arm and brought her closer, lapping and feeding, feasting on her until she was ready to fly and quite eager to sing.

Barron thrust his fingers through her hair and tangled the locks around the long, knobby digits. “Keep doing that, and you’ll earn a mouthful.”

Edward’s fingers lodged inside her, spreading her. He inched back and then surged forward, plunging his tongue between her lips. Then he repeated the intimate procedure once again.

Oh, she was crazy. She teetered on the wings of madness.

She wanted to fly. She needed to soar. Hell and damnation, she longed for so much more.

Barron held her away from his cock. “Tell me what you need, Heidi. Talk to me, baby.”

“Cock,” she blurted out.

“The truth will set you free,” she told him, grinding against his chin.

Barron pulled her in his arms and kissed her. When their lips parted, he said, “Darlin’, in this town, the rules don’t apply here. In Sin City, the truth will bring you far more trouble than a lie.”

Edward stretched out on the bed. Heidi came over him. Seductively, she crawled up the mattress, brushing her lips across the tip of his cock and gliding over him like a silk scarf. She barely let him touch her, and he was eager to touch, itching to hold her, brand her as his own. He also realized, given his size, he needed to take her slow, enter her with caution.

He’d waited for her. Since the moment he first saw her, her name had been on his lips. Something else had occurred to him, too, something he wasn’t sure he’d ever admit because he was a private person, but he had a feeling Heidi had been with him since the day he moved into the loft. He’d felt her presence, sensed her in all the ways that mattered.

He’d taken his hand to his cock more times in the past year than he had in over a decade. The images were always the same.

He’d imagined a woman with milky skin riding him. She’d moved over him like rain, driving him crazy, making him want, and satisfying him until the next time. He’d felt the daily presence of a strong power, a force so incredibly real that he’d remained in a constant state of arousal.

Heidi mounted him. Her slick heat enveloped his cock, and he was hers. He belonged to only one woman right then, and he imagined he would feel the same way days, weeks, months, and even years down the road.

Her pussy rubbed against his shaft. He gripped her hips and moved with her, sliding her up and down. “Feel me, Heidi.”

Her gaze held at their connection. When she looked at him again, she didn’t say anything, but he understood. He’d wanted to make sure, but he knew. A woman like Heidi felt him all the way to her soul. Whether he held her for a minute, an hour, or a decade, she would always long for him as much as he would forever desire her.

While entranced by her eyes, he became aware of Barron behind her. She flinched. The area of space he occupied became snug, tight. Her body hugged him now, practically clenched around him.

One thrust matched another. Barron slid in and claimed his spot. Barron’s cautious strokes followed Edward’s more deliberate moves, and they fucked her until she creamed around them, screaming for more, begging for less, but giving herself to them in a way only a real woman could. 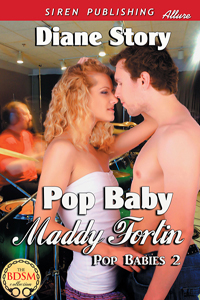