Emily Fenwick, formerly with the NYPD, is now the reluctant defender of 1890 New York. Unfortunately for Emily, who hates "the creepy stuff", she ignored her inner voice, went to a carnival in Central Park, and entered a Victorian tent in hopes a psychic would have some encouraging news about her woefully boring love life. The guarantee she received of meeting a tall, dark, and handsome stranger comes with a huge catch - he lives in an alternate dimension of the past.

Jack Pettigrew leads a quirky band of lost souls in a battle to save New York circa 1890. Nightmares have come alive and threaten to terrorize a fragile era. Jack leads the “punks,” who have been sucked back in time through a vortex. Each has a fleeting memory of their own death–or near death–and must determine for themselves why they have been chosen for this mission. Is Steamside their Purgatory? Could an Egyptian obelisk in Central Park be the cause of the time rift, or is Emily herself to blame for the goblins, zombies, and other nightmarish scenes plaguing them? 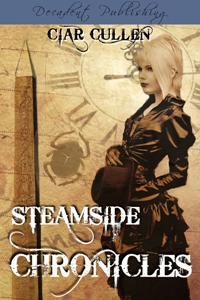 Since the night I traveled to 1890, I’ve tried not to obsess over where I might have turned left instead of right, or not opened a door that was meant to stay closed. Perhaps if I were a Sex-in-the-City kinda girl, things would be different. I can’t imagine ever chatting about shoes or my romantic escapades over mojitos. I don’t think I’ve even had an escapade—aside from being thrown back in time. I don’t drink mojitos, whatever they are.

It’s not that I never had a boyfriend or alcohol, but the guys I met and beer were alike—you knew what you were getting into and that the effects wouldn’t last long. You were best to combine the two. You could blame the sex on the booze and make pretend you didn’t care about the guy. A loathsome existence, I know. My theory was that a female cop’s odds of meeting a straight, attractive nonfelon in New York were about as good as a large meteor dropping into the Hudson.

I went to Central Park on a hot August Saturday night fantasizing about a Tom Hanks You’ve Got Mail type guy strolling with his dog—not that I ever thought Tom Hanks was hot. Yeah, that’s just how it worked out. I met a guy all right, and he’s way hotter than Tom Hanks.