Parrish Armstrong is a man who’s lost everything only to carry on. His pack has watched him pull through a time of staggering grief and keep going. He’s the kind of wolf people talk about—gruff, rough, no bullshit. The love he had with his former partner is one that’s still talked about—the real deal. But now he’s ready to live again and he has his eye on a young wolf. If only his love interest wouldn’t freak out every time Parrish is around…

Michael King has his own past. One full of being unwanted, not good enough and finding out he’s a half-breed. This circle of wolves took him in, made him one of their own. Despite a staggering attraction to Parrish—the bigger, older, much steelier wolf—the man scares the hell out of Michael. But what scares him more is the memory of the man’s dead lover that seems to linger around Parrish like a wraith. How can Michael ever hope to compare with a fairytale true love like Parrish once had?

Now a string of murders has them patrolling the town border as a team. Fate has tossed them together. Just two men, a dangerous killer and a gun with sterling silver bullets. To Parrish, the gun is an afterthought. To Michael the gun and the silver bullets it contains just might be the impetus he needs, the desired coercion, to be with this man. The question is, is Parrish willing to use his weapon for something far beyond hunting a murderer? Is he willing to use it as a means to a sexual end?

Heat Rating: Sextreme
Word Count: 12,208
13 Ratings (3.6)
Vampires/Werewolves Alternative (M/M, Gay) Erotica Fiction
In Bookshelf
In Cart
In Wish List
Available formats
PDF
ePub
Mobi
Cover Art by Willsin Rowe
Reviews
I liked the writing, and loved the characters. The story was so-so.
Jilrene
This story had some good ideas, but it was just a little too short to fully flesh them out.
Rob D
Read more...
Excerpt

“Walk” Parrish said, nudging him with the toe of his work boot. “I’m walking you.”

Michael walked like a man to the gallows but in it all Parrish could sense his arousal, building like the storm that was rushing toward them.

At the house, Parrish said “Open up, little red.” He grinned.

Michael flinched. “You know I didn’t…I mean, I don’t know if I should have told you.”

Michael straightened, his heart pounding so hard his tee fluttered under his jacket. “No,” he managed to say, though to Parrish he sounded like he might choke on the word.

Parrish reached into his jacket—refusing to acknowledge that his hands shook just a bit—and took out the gun. He cocked it and pressed it to Michael’s lips. “Yes.”

Sterling silver rounds. Dead in an instant. They were both thinking it, no doubt.

Michael reached behind him and unlocked the door. He took a step back into the foyer and Parrish followed.

“Get on your knees.” Parrish kicked the door shut and shook off his jacket one arm at a time, keeping the gun trained on Michael.

Michael dropped to his knees, his eyes shining with fear but in there a touch of gratitude too. “Parrish.” That was all he said. One word.

Parrish slid the gun between Michael’s lips and thrust it like a metal cock. Michael’s eyes drifted shut, his hands shook there, dangling at his hips. But his cock was hard, Parrish could see the ridge of it in his jeans. His blood was high too, Parrish could smell that as surely as roses on the air or the ozone smell of a lightning strike.

Overhead thunder boomed and he thrust the gun barrel once more before taking it out and saying. “Now me.” 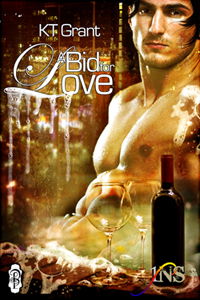