Mallory Reynolds is the unknown persona behind Sterling University’s most popular blog, The EveryGirl’s Guide to (Almost) Every Cock on Campus. She provides her classmates with in depth reviews of the men available to them, complete with all of the dirty details. It’s a good thing no one knows who she is though, because not every cock on campus knows what it’s doing.

Everything’s going just fine until an unreliable source feeds her some bad intel, and the subject of one of her blog entries tracks her down. Cash Manning knows that he and Mallory have never hooked up, but the more they argue, and talk, and flirt, the more into the idea he becomes. It’s too bad for him that he and Mallory already know each other—a fact he doesn’t seem to recall.

The more he pushes, the more she pulls away. It’s a pride thing, alright? 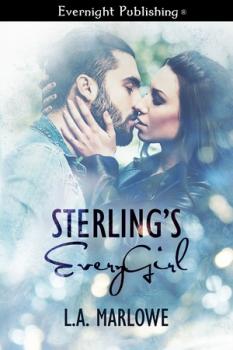 “You have like, the dirtiest mouth I’ve ever heard on a girl.” He laughed and leaned in closer, planting one hand on the wall above my head. That’s all it took for me to turn into a puddle of mush. I couldn’t help but think of how his body had felt over mine the other night. He smirked. He did it a lot, but I was willing to overlook it. It was a good smirk. I liked the things it promised. “How much dirtier does it get?”

I laughed so hard my head jerked forward and I had to bury my face in his shoulder so he wouldn’t bear witness to just how ugly my laughter could look up close. When I was finally done, tempted to wipe the moisture away from my eyes with his t-shirt instead of my own, I placed a hand on his chest and pushed away slightly.

I liked the way he smiled down at me. I even liked the stupid, fluttery feeling in my stomach that had little to do with how I really did want the bag of chips I’d come down for.

I was in such big trouble.

Then he brought his face closer and took my chin between his index finger and thumb just before running his nose along the length of mine. My inhale stalled somewhere in my lungs and my heart did the same inside my chest. I finally caught my breath in time for him to pull my bottom lip into his mouth. The brick wall at my back was cool and scratchy, but I didn’t mind it in the least when Cash’s body was pressed against my front.

My hands scrambled to find something to grip, to hold on to, and eventually settled for clutching the fabric of the back of his t-shirt. Or at least one of them did. The other decided it needed skin to skin contact and worked its way underneath the hem. I dug my nails into the small of his back, feeling ridiculously thrilled at the expanse of rock-hard muscle. I hadn’t gotten a good look at his back the other night, but I could tell it was probably nothing short of amazing. I wondered if he had more ink there.

I didn’t even realize I’d lifted my leg to wrap around his like I was about to work a stripper pole until his fingers dug into the skin high on my thigh. A jolt shot through me and I let out something close to a whimper. Cash backed off then, enough to look down at me and let our breath mingle for a split second between our mouths before he kissed me again.

Cash let out a growl as he lifted his lips from mine and let his head hang down onto my shoulder. I would have laughed if I hadn’t been so irritated by the interruption myself. Stacey stood at the corner of the alcove, looking on with an obnoxious, shit-eating grin on his face. I let my leg drop from its hold on Cash’s thigh and straightened my t-shirt as he immediately turned in the opposite direction to no doubt hide the hard on I’d felt against me just seconds before.

I could have kicked him right in the teeth. It would have been the perfect way to get the smartass grin off his face. Instead I just gave him a sarcastic thumbs up and muttered, “Got it.”

“So,” Cash said as soon as Stacey disappeared around the corner. “Who’s the guy in the plaid shirt?”

I didn’t have any reason to be a bitch at the time, but it just came so naturally to me.

I had no idea what blog post Stacey actually was.

His back was to me while he made his selection from the vending machine, but I still saw the way his muscles tensed. He bent down to grab his food and turned to face me with an unreadable expression.

“What? So you can make comments on my blog about wanting an open slot, but I’m not allowed to mention it at all?”

“I didn’t say that. Look, it’s fine. You should get back inside, though. They’re waiting for you.”

He passed me, but not before shoving a bag of sour cream and cheddar chips into my hands. Exactly what I would have gotten for myself. They made my breath smell rank, but were too delicious to give up. I looked down at the bag, then up to his retreating back.

“Thanks,” I mumbled, but I doubt he heard me. I stayed rooted to my spot for about half a second before I ran after him. I caught him by the elbow just before he could reenter the library, and pulled him back to face me. His expression was still blank, but at least blank wasn’t the same thing as angry. God, I could be such an idiot. “I’m sorry.”

“You don’t have to apologize.” He pushed a hand into his hair. “You were just answering my question.”

“I was,” I said, taking his hand from his hair and twisting my fingers through his, “besides, I thought you dug the fact I’m kind of mean.”