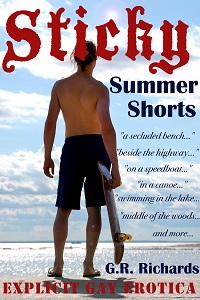 It was the last thing in the world Brody expected to find. He walked Patch in the same park every day, and he’d never noticed anything untoward. But maybe that’s because the bench was shielded on three sides by a thick cloak of pine trees, and for some reason faced away from the dirt path.

Of course, the bench itself isn’t what had captured Brody’s attention. It was the people on the bench that really interested him. He heard their voices and stopped short, pulling Patch’s leash hard enough to make the poor dog whine.

A man’s voice, deep and confident.

Brody was pretty sure he knew, but he had to see what was going on behind those trees.

“Wow, it’s hard as wood.” That lisping voice was distinctly male, though much higher than the first. “You’ve got the biggest cock I’ve ever seen.”

The deep voice laughed at the obvious flattery, but now Brody was even more tempted to catch a glimpse of these guys. Were they naked, or fully clothed with just their dicks sticking out their open flies? That would be the way to go, Brody figured, in a public park where they might be caught at any moment. They were deep in the woods, granted, and Brody walked here every day and hardly met another soul. So, hell, maybe they were naked after all. Brody just had to find out.

“You afraid of my big black cock?” That was the deep voice again.

The higher voice let out a witchy cackle. “Honey, I’m not afraid of anything.”

“Then how come you’re hardly touching it? Come on, now, grab my dick.”

“What does it feel like I’m doing?” the lisping boy whined.