To say that Ellie had a large bust would be like saying that the Sun is sort of warm. While she was much more than just her chest, it couldn't be ignored for long because it was her most defining characteristic. Set in the same universe as Still Life Barbara and Still Life Lyssa, this third excursion into that world introduces us to Ellie, a purposeful constructed mannequin with an insanely extreme figure well beyond what any normal woman would possess. While the occasional inanimate mannequin can spontaneously come to life to pursue an adventure in our world, those who understand the intimate details of the process can bring that about on command, after having constructed the mannequin in question to meet their current desires. The newly alive person initially has few rights and no possessions. Under those circumstances her life is likely constrained to the purpose for which she was constructed. This isn't intentionally cruel, but rather just how things are. Ellie's few hours alive were planned to be limited to a fashion campaign photo shoot, after which she would be returned to her inanimate state until, or unless, needed again. With no friends or life otherwise for one like her this was actually a kindness and she would enjoy her few hours alive as best she could alone since professional photographers knew far better than to get involved in personal relationships with their models. For Jake, however, who was walking past the photo shoot that morning, he didn't have any of these preconceptions. This allowed for the possibility of something very much more to happen between him and the beautiful Ellie—if they could manage to overcome all of the barriers thrown up against all such cross-cultural relationships. 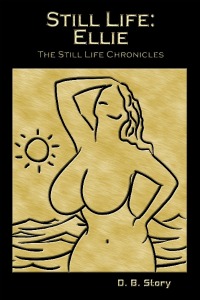 Life's lessons often hurt. You're told it's good for you every time and you doubt it every time. Then the day finally arrives when you're ready to use all the things you've so painfully learned along the way and it suddenly all seems worthwhile.

When I saw her standing there on the beach that early morning, the outrageousness of her figure immediately gave her away. Her breasts weren't unrealistically large. They were impossibly huge, easily doubling the girth of the otherwise sturdy frame that she'd need to carry them. They caught my eye exactly as they were intended to do. She was leaning back against a large piece of driftwood, possibly to help her keep her balance.

It was a while before I noticed the rest of her in order, tanned, naked, and female. The last thing I noticed was her blonde hair and the uncertain, but welcoming, smile, which is easily her best feature—boobs included.

Her only adornments were a pair of pure gold earrings, gold necklace, and a gold waist chain—all no doubt part of the spell that had brought her to life perhaps only moments ago.

I shouldn't have been surprised, and in reality I wasn't all that much. Things like this, and other small magiks, have been going on for a decade now since the basic principle was discovered, but it still hasn't permeated all that much of everyday life. Most people do things the way they've always done them, leaving magik for people with special needs—like photographers.

Realizing there had to be more going on outside my tunnel vision of the woman, I looked around to see what was happening. A few feet down the beach I saw a white nylon tent flapping in the breeze. A photographer and a couple of assistants were preparing their equipment—props, tripods, and reflectors—to make best use of the morning sun on the west-facing beach of this Caribbean island. I caught a brief glimpse of a tall, slim, dark-haired woman with a stunning face just as she stepped into the tent. She looked like one of the up-and-coming supermodels I've seen on magazine covers lately, but I couldn't remember her name. She seemed the very opposite of the woman in front of me.

No one seemed to be paying attention to the new girl. Being willing to take her smile as the minimum requirement for an invitation, I interrupted my morning walk to walk over and say, "Hi."

"Hi, yourself," she replied back, in a sweet voice devoid of any artifice.

A quick glance over my shoulder showed me that no one else seemed to be paying any attention to us. With the wind whipping our words away out to sea, no one could probably hear us anyway. So I looked back to her and bantered some more. "You look all ready to go and all they're doing is making you wait?"

"Yes," she replied, unfazed by my sub-textual reference to her nudity. "They were so intent on catching the morning light before the beach became crowded, yet now they're just fussing with their equipment."

"Hurry up and wait," I commented sagely.

This beach would become crowded soon enough, I knew. We were only a couple hundred paces away from the first class resort I was staying in for a week of long anticipated vacation. It was the last week before high season arrived at this lovely site and prices doubled, which explained the photographer. Photos were always shot out of season in order to be ready by the time when the true moment for them arrived.

With no one yet paying attention to us I looked back at this striking woman once more. She'd clearly been sculpted to have the most extreme figure feasible that still fell within the bounds of possible. Anything more would have been a parody of the human form. I knew that only days earlier she'd lain on some Pygmalion's table as a special order for either this photographer, or more likely the customer who'd hired him. Nothing about this was particularly new. The legends of it went back thousands of years, even if they were only recently realized.

By now the woman was looking at me intently. Gazing at me as if to remember every feature. Perhaps it was just because I was the only person around paying any attention to her, but that level of deep attention from such a striking woman is always flattering to the male ego. I decided at that moment I would stay with her as long as I could get away with it.

"What's your name?" I asked her, hoping she wouldn't respond with, "Galatea." Somehow that would be just a little too Greek for me. Then I mentally kicked myself. She might not even have a name, and this question would embarrass or discomfort her. How should I have known? I'd never conversed with one of the awakened before.

"Ellie," she replied softly. "At least that's what one of them called me."

"Ellie it is," I said thankfully. "A pretty name for a beautiful woman."

Now she was embarrassed.

"Do you really think I'm beautiful?" she asked quietly, looking down in confusion.

"Absolutely!" I replied in an epiphany of truth. "Gorgeous, fantastic, lovely, a knockout."

I didn't get to add "sexy" and several more synonyms before she looked back up with a much brighter smile back in place now. I decided not to overdo it in the first two minutes, and held back "sexy" in reserve for another time.

"Thank you," she told me mellifluously. "You're very kind."

"And honest?" I prompted with a grin of my own that I couldn't quite hide.

She hesitated only a moment before confirming, "And honest."

"Thank you, ma'am," I said, sketching a gallant bow towards her. Then, to emphasize the true feeling behind my words with action I added, "I'd love to have your company tonight for dinner, if you're available."

There, I did it—foot in mouth moment. Of course Ellie wouldn't be available for dinner tonight. She belonged to the men who'd awoken her for their needs. Even if she wanted to come, it wouldn't be her decision. Whether or not she knew it, I knew these animations seldom lasted long. There was a price involved, as well as moral implications. When you create something you become responsible for it. Most people are lucky to manage running their own lives. Taking on full responsibility for others as well bears you down beyond what you can manage. I'd made the grand gesture, to show her that my compliments hadn't just been casual small talk. Now the wind that blew our conversation out over the waves was also blowing in the sounds that the photographer was getting ready to start. My time with Ellie was at an end.

But it had been worth it! The gratitude on her face showed me that she'd gotten that I'd really meant it. She knew she wasn't a real woman. Unlike those of her type who came alive on their own in store windows and back rooms, today might be the only day of Ellie's life. But even one day is so infinitely much better than nothing at all.

She opened her mouth to thank me for my final compliment, and say goodbye, as I heard the assistant calling for her to come over now.

"I'd love to," she whispered to my ears alone. "I'll see what I can arrange. From what I heard earlier, we should be wrapping up here around two this afternoon."

"Come now!" came the command from off to my right.

Ellie turned her head back to me for a moment as she obeyed to ask, "And what's your name?"

"Jake," I replied to her retreating back.