Still Life: Barbara introduced a world just slightly shifted from our everyday one where, under the right circumstances, a mannequin might unexpectedly come to life to become your amazing lover. Now in Still Life: Lyssa the story continues as James, a friend of Mike and Barbara who had exactly that happen for them, wants to find his very own Barbara – as anyone knowing their story would. While the lovebirds are quite willing to help him out as best they can, James is about to learn that what you think you want, and what is actually offered up to you instead, may not be quite the same thing. The operational rules of this special world are inscrutable when viewed from only one side, which can end up presenting the hopeful lover with a Hobson's Choice of either taking what is being offered so generously to him, or losing it all if he can't overcome his own adult biases and prejudices. While you don't always get what you think you want, you may just be getting exactly what you need – if you can recognize it in time. (It is not necessary to have read Still Life: Barbara to understand and enjoy Lyssa's tale.) 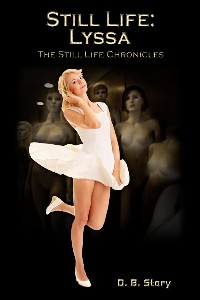 Arriving at my optimal spot on the concrete floor, I finally got the words out, addressing the group of motionless mannequins with an embarrassingly nervous quaver in my voice.

"Who wants to come home with me tonight?"

My words spread through the room at mach one.

If you're tall, volleyball is your game. Why not basketball, or something else where height gives a natural advantage? Because volleyball, unlike any other sport, allows men and women to compete equally. It's the most egalitarian of games.

And if you live in San Diego, you play on the sand or in the grass at the beach—every weekend of the year.

And if you're at the beach, you dress accordingly.

While most of us who come, play for the entire afternoon, when Mike and Barbara would drop by, it was often just for a couple of hours. It wasn't that they didn't like the game or play it well. It was more like they always seemed to have so many other things awaiting them to do that they just couldn't stay at any one activity for very long. That might be a blessing in disguise for the rest of us. It was certainly good for my game, which suffered greatly whenever Barbara was around.

Why? Well you have to know Barbara. I've never seen Barbara dressed other than completely fashionably. She has an innate fashion sense of what looks best on her tall body. If clothes had minds and mouths, they'd be clamoring for Barbara to wear them next, because she seems able to wear everything well.

On the beach this translates into the skimpiest bikini by far of any woman with a figure approaching hers. Her favorite is a simple pure black, which goes well with her brunette hair, while contrasting well with her flawless skin.

Her bikini top plasters itself over her large breasts like a loving second skin. Spaghetti straps hiding nothing, somehow manage to support it all.

The matching bottom is definitely not a thong. There's no style at all in that and Barbara is always elegant. Instead the smooth black fabric adequately covers her own smooth front and back, with inch wide straps on the sides cut high over her hips. It's hard to imagine how taking any of it off would leave her more naked than the she already was, yet it works like a charm for her. And she couldn't have been more comfortable with herself if she'd been completely covered for an evening out. It's a comfort level that ensnares everyone around her into agreeing that it is impossible to imagine her wearing anything else. She's just that kind of woman. And she usually plays the game barefoot, balanced on the balls of her feet like a model. Who wouldn't want a woman like that in their life?

Today Mike and Barbara stayed until we were taking down the net at sunset and deciding where to go afterwards for drinks and dinner. Barbara pulled on a light wrap, and some footwear that seemed a cross between beach sandals and stiletto heels, and was ready to be seen anywhere in the beach area.

One other interesting thing I've noticed about Barbara is that she never drinks. Water sure, but not alcohol. Not that she ever seems to mind if Mike has a cocktail or a couple of beers.

Being the last to the table, we ended up sitting up across from each other in the patio of one of the Pacific Beach restaurant/bars that is always a favorite choice. No one else was paying much attention to us and we finally got a chance to talk.

"I sure wish you had a twin sister," I told her sincerely, feeling rather down with my lack of success with women lately.

"None that I know if," she replied with a touch of sadness, followed by one of her bright smiles. She knew what I meant, and was pleased by the compliment that wasn't a come-on.

"I guess there's no point in asking if there are any more where you come from," I bantered back, being pulled out of my dour mood by her cheerful attitude. That's the magic of Barbara.

I almost blew this off as polite small talk. I mean after all, I'd just given one of the lamest attempts at a compliment one can give. Then, just as I was ready to move on to a new subject a thought occurred, stopping me just long enough to reconsider her words. This was, after all, Barbara. A woman without a hint of artifice in her manner that I'd ever detected.

I looked around. Mike was engaged in an intense discussion with a couple other club members about some new activity he obviously wanted to try. Other people were looking up at the sports scores on the scattered television screens, or still looking at their menus. The first round of drinks would be arriving momentarily and no one was paying any attention to us.

"What do you mean there might be?" I asked.

"Do you know the story of Mike and me?"

I admitted that I didn't.

In very few words she told me.

I was amazed, although in hindsight it seems so obvious. What else could she have ever been? It wasn't like this never happened in this world. It was just that I had never known of anybody it had actually happened to—until this moment.

Then she gave me some advice, for when the right opportunity would come along. Barbara left it up to me as to if I'd have the courage to try it. That's just her way.

"But this all presupposes," I told her, "That I'll find myself in the right circumstances in the first place. I've never been there yet."

"You will," she replied with finality, if it's meant to happen."

That was all several weeks ago, although it felt like yesterday right now.

My words hung in the air, echoes fading to silence with no reply.

It had taken me days of working here to steel myself to the point of insisting that I was going to do it tonight—or not at all.

It seemed simple enough to try. Just speak your wish. I'm sure what has taken me so long was the simple fear of failure. If it didn't work I was going to be crushed, and I knew it. Until I actually tested it, the idea remained alive. It was like a lottery ticket where the numbers hadn't been drawn yet. Anything was still possible until that moment actually arrived.

"The first time is the most powerful opportunity," Barbara had whispered to me. "Don't waste it."

Then she'd added not to rush things the moment the first occasion presented itself. "Give some time for the environment to get to know you first," she'd said, whatever that meant. But I had to believe she knew what she was talking about.

I hadn't foreseen the necessary circumstances happening for me any time soon, when out of the blue this job offer arrived. Now here I was, nights later, praying as hard as I knew how that Fate was real—and that for some reason she liked me. As far as auspicious conditions went, this seemed as good as it was ever likely to get.

I waited for a silent count of ten as the last echoes of my words died out. And then ten again, before preparing to admit defeat. I'd never thought to ask how long this was supposed to take. I counted to ten one final time, before thinking Oh well, nice try.

I was already turning to shut down my system for the night and leave when a young voice behind me said, "I will."

I jumped. I'd been addressing the group in front of me and this voice had come from behind. I jerked around to see who had spoken.

The young figure that went with the voice stood there nude, not more than five foot five in height, yet with slender legs that seemed far too long for her overall stature. My eyes followed them down as they narrowed to ankles that seemed too slim to support even her trim figure. Barefoot on the concrete floor, she appeared poised on the balls of her small feet, as if wearing invisible heels.

Looking back up again I caught myself gazing at her B-sized breasts, which were perfect, tight hemispheres on her youthful chest. Her face was beautiful, with minimal makeup apparent. Her nails, both fingers and toes, were painted cotton candy pink. Her light blonde hair was straight, long, and in pigtails. She looked far younger than any of the adult mannequins that I'd been addressing!

This is not what I had expected; a response from young adult mannequin that I hadn't even considered while making my offer. Yes I'd known that she was there. I'd glanced at her once and promptly forgotten all about her the moment I realized that she was nothing like my ideal Barbara. I didn't even know why she'd been placed separately from the other mannequins in the storage room. Yet she was the only one to have accepted my invitation.

I was dumbfounded, and stood there for a long time as still as any other mannequin.