Remember back when you were 18, the world was a simpler place, and the biggest mystery in your life was the opposite sex? In this young man's fantasy it is the late summer of 1969, I was just out of high school, gas was cheap, and magic— magik as they called it—was still new to the world. So when a Wild-Eyed Man handed me a wand with the promise of great rewards in return for a small favor that might be a tiny tad illegal, I had no idea what I was getting into. Not until I that first young female mannequin started breathing and stretching on her own did I even begin to understand the adventure that I now found myself thrust into. This is the very beginning Still Life story. 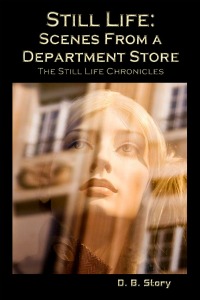 "Let me show you something more convincing," he said gently.

He ignored that, standing up and gathering up his coat.

"Where are we going?" I wanted to know.

"Not far," came the ambiguous reply, as he headed towards the restrooms.

Intrigued, I followed him, knowing he couldn't be going inside of them because they were locked and you needed to get the key from the counter. When he pulled on the restroom door and it didn't open, I smiled smugly.

My smugness disappeared a moment later when he simply tapped the lock with the tip of his wand and the door sprung open on its own.

"Are you coming?" he asked, stepping inside.

In those days we were all warned about strangers taking us away by the time we were five years old, but that was little kid stuff. Fortunately I didn't have to worry about that because it wasn't his intent. Mr. WEM just wanted some privacy.

Inside he locked the door the old-fashioned way, before carefully checking the stall to ensure that we were really alone. Then he gripped his wand tightly for a moment and looked to all the world as if he was listening for something. Whatever he did, or didn't, hear apparently satisfied him because he came back to the wash counter with a smile to go along with his still wild eyes.

I started to ask the obvious question, but he put a finger to his lips to silence me. "Watch," was all he said.

Then he reached into one of the large coat pockets and took out a small rag doll, which he carefully set on the counter so that she was sitting up against the mirror. Doing nothing more than he had to unlock the bathroom door moment ago, he tapped her gently on the head once with his wand.

To my astonishment, the doll tilted her head up, smiled at him, and blinked her tiny blue eyes twice.

He then touched each of her arms once with the tip. She moved each of them as if feeling out how it actually felt to move them on her own before raising one of them and waving, first to him, then to me. He continued by tapping each of her legs lightly, at which point the doll stood up and danced on the counter top.

He allowed her to dance for a minute before tapping her one last time on the chest. With a final, brief smile the doll collapsed lifelessly back down onto the counter, like a puppet whose strings were suddenly cut.

I didn't know what to say. He picked up the doll and handed her to me. She was just a lifeless bag of sawdust. But I knew what I'd just seen. It was at that point that I started listening to what he had to say a whole lot more carefully.

It was that meeting which directly led to me sitting in this darkened store now.

It wasn't completely dark. The spotlights still illuminated the display windows, despite the lack of customers with The Mall now completely closed. Perhaps they hoped to sell to the occasional custodian. We were still living in the days before anyone ever heard the words "Energy Crisis", and nobody worried about such things.

The Exit signs also cast their dim greenish glow throughout the store, along with some other low, nighttime lighting in place. Now that my eyes had adjusted, I could have easily found my way around if I'd dared to reveal myself.

In addition to the silence, save for the ticking of my watch, I was also aware of the smell of new fabric around me, along with the soft sounds of the air circulating through the store.

For the tenth time—or was it the hundredth—I checked the wand next to me. I wasn't letting it out of my reach.

This one wasn't the wand I'd seem Mr. WEM use. He wouldn't give me that one. This one was cruder, more roughly finished, and he told me, far more limited in its abilities.

I'd rather already proven that for myself. I still had bruises on my palms from where I'd tried his trick of collapsing it into nothingness, and it stubbornly didn't collapse.

He hadn't laughed at me when I'd tried that after he gave me this one—quite. Instead he told me I was lucky that I didn't have any splinters from the attempt. But he seemed to like that I'd tried it at all. I guess I did believe now—at least some of his story.

Here's the bottom line. In return for a brief favor, something about needing directions at the moment or some such thing, Mr. WEM had made a mistake. He'd given away a far more powerful wand than he'd intended. Which, given his scatterbrained approach to apparently everything, should hardly have been a surprise.

Unable to rectify the situation himself at the moment due to other necessary business, it was now up to me to retrieve that wand by swapping this one for it. And he had told me in great detail just when, where, and how this exchange would have to take place.

Why I'd ever agreed to such a crazy plan I'll never know. I think it was that little dancing doll. That, and the fear that nothing exciting was ever going to happen in my life otherwise. It was only starting to dawn on me now that the little dancing doll might constitute a mere down payment on what was going to come next.

As the minutes audibly ticked away on my watch, which had never sounded this loud before, I started having doubts. Although I'd been told to be patient and it would happen, I found myself already planning for failure. How I'd just sit quietly here until morning came and they opened the store again. Then I'd wait at least a half an hour—forty-five minutes would be even better—until enough customers came into the store. At that point I could finally slink out before anyone realized they hadn't seen me enter in the first place.

I was keeping my mind busy by working out this plan in ever-greater detail when a sudden motion caught my eye. My attention was immediately riveted on it, being drawn towards it so much that I almost leaned forward right through the hanging outfits and out of my hiding place. Of the four young female mannequins in the store window directly in my view, the one on the left had just straightened up.

As I stared intently now, all my other plans forgotten, she straightened up even further. Even facing away from me I could see her chest expand as she took her first deep breath.

My attention was riveted on her as she took another deep breath, then one more after that. This was followed by stretching her arms out widely, careful to not bump the motionless figure standing next to her, and flexing her bare legs below the miniskirt in a most appealing way.

Convinced now that her whole body was alive, she stepped forward, away from the metal support rod that had rested low in her back and propped her up. Free of its now unnecessary support, she brought her hands and arms first down, then up over her head in full circle to as far as she could reach. As she did so she arched her back, pushed out her chest with its teenaged breasts as far as they would go, and stretched upwards until she was standing on the balls of her feet—lifting her heels right out of the low summer sandals she wore. In every sense of the word she looked exactly like a late teen girl on the cusp of womanhood who'd just awakened from a long night's sleep.

From my position behind her, I could only see her bare arms sticking out from the colorful summer top she wore, bare legs below her short matching skirt, feet almost out of the low-cut sandals that didn't seem right for them, and deep, golden hair falling in broad waves down below her shoulders. What I could see only in the reflection of the glass window in front of her was her young eighteen-years-old teenaged face.

I could hardly contain my excitement waiting for her to turn so that I could finally see her face.