In spite of all the bad memories and fears, Jordan had dutifully returned home to Mt. Desert Island, Maine to look after his ailing mother. Now, financially devastated by her care and emotionally exhausted by her death, Jordan tries to pick up the pieces of his life and rebuild his floundering career as an illustrator. While working on a new commission, he finds a man unconscious at the local lighthouse. When the man regains consciousness, he has no memory.

The only clue to his identity is a limited edition hardcover copy of Storm’s Eye, a mystery novel by Jordan’s favorite author and client. Inside is a scrawled dedication, ‘To Zane’. What is this man’s story? And why, since meeting him, has Jordan’s life strangely paralleled the plot of the book that he carried? Will Jordan weather the harrowing trials of ‘Storm’s Eye’? Or will he become a casualty of the mysterious stranger to whom he opened his heart? 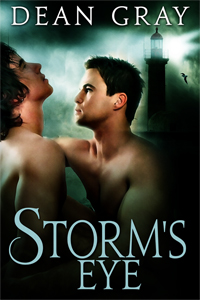 With a final drag and drop, Jordan Rayne sent his latest creation winging its way toward the publisher. He looked up, squinted at that little clock in the right hand corner of his monitor, and removed his glasses to rub the bridge of his nose. His cover art was finished and shipped, just in time for lunch. He sighed and stood, rolling his shoulders and bending side to side, his back cracking in protest as the muscles loosened after having been hunched over the screen for so long. Sam raised his head, tilting it enquiringly at him, and Jordan laughed.

“Yeah, I know what you want, some lunch and a nice long walk along the beach, hmm?” Jordan smiled fondly at the furry ball of energy he’d saved from certain death. With his mom’s recent death, it was just Sam and him in the house. Sometimes he wondered what kept him here, now that the last thread tethering him to the island was severed.

Sam limped over and nuzzled at his hand. When Jordan had first found him out on the main road, hurt and bleeding, he hadn’t been sure the pooch would make it. Taylor, his best friend and the local vet, had done what she could. At the time, Jordan simply didn’t have the deep pockets for the fancy surgery needed to mend Sam’s leg perfectly. He could barely afford the drugs to keep his mom in treatment. So they’d patched him up as well as they could, Taylor extending herself further than he could ever repay, and hoped for the best. The dog had made a startling recovery, urged on by plenty of rest and good food and lots of love, and had flourished, the slight limp now barely noticeable. Jordan’s conscience still twinged as he watched Sam limp over to his dish, but he had barely been keeping things together at the time. He had done the best he could.

He’d done his best to find Sam’s real owners as well, papering downtown Bar Harbor with a hand-drawn sketch of the dog, but to no avail. The only thing it had prompted was one kind soul wanting to buy the illustration. But no one had ever come forward to claim the “goldendoodle,” which Taylor had told him was a golden retriever/standard poodle cross.

Who had a dog breed like that anyway? Summer people! Jordan shook his head, grinning at the dog’s foolish antics, weaving in and around his legs like he was still a little pup instead of the fifty-pound fuzzball he actually was now. So without meaning to at all, Sam had drifted into Jordan’s life and stayed, a loyal, faithful companion.

Jordan could number on one hand the individuals he could count on, and it didn’t bother him in the least that a dog was one of them. It wasn’t that Jordan didn’t like people. He liked them well enough, at a distance, where they couldn’t get too close. He was tired, so tired, wrung out like an old dishrag, with nothing else to give, empty inside. Opening himself up had always been fraught with conflicting emotions and misunderstandings, leaving him vulnerable, on view, with nowhere to take refuge.

It was safer to simply stay on his side of the comfortable walls he’d built. That way he couldn’t be disappointed. His walls he could live with. Sure, sometimes he was lonely, but he didn’t have much faith in anything else.

Shaking off his gloomy thoughts, Jordan looked out at the ocean. The sea was grey today, the ocean flat, mere ripples, exhausted, like Jordan’s emotions. So late in September it was certainly too cold for a swim, but a walk would be wonderful. He had a new commission, the one thing guaranteed to stir Jordan from his fatigue and spark his imagination. The one thing he had always been able to trust, to open up to, his work. It was the one thing that had never let him down, and in return he’d lavished all his love and attention on it through the years.

And not just any work—the cover and key interior illustrations for a favorite mystery writer’s new book that featured a lighthouse. He savored the coil of excitement that flared through him. He’d take a hike down to Bennet Cove and sketch the old lighthouse this afternoon, get a leg up on the project. The Bennet Cove Lighthouse had been shut down for years, replaced by a lighted offshore buoy, but he preferred its isolated location and classic lighthouse shape and mystique to the more popular Mount Desert Island Bass Harbor Head Light.