Traveling for the holidays sucks, but not when you meet the right person.

Julian Tucker learns this the hard way when work sends him to fix a crisis from Australia, Japan, to several locations in the States. To make matters suck more, he's sitting in the Denver Airport on New Year's Eve. This wasn't part of his plans. Oh and his boyfriend isn't picking up the phone. His luck gets worse -- the incoming blizzard shuts down the airport. He's stuck there.

A fellow traveler, Emmett Bishop, takes the delay in stride. A superhero loving photojournalist, he sails along with the trouble, sweeping Julian up with his enthusiasm and zaniness. Unable to take flight, Emmett figures out another way to enjoy the holiday with Julian.

Suddenly, a snow delay doesn't seem so bad a way to ring in the New Year. 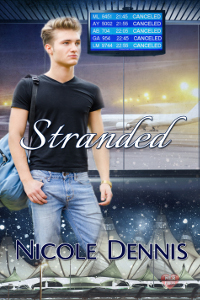 Traveling twenty-plus hours around the holidays was brutal. The job to upgrade all the systems technically had finished six months ago. The newest branches kept saying everything worked perfectly, but that's not what the main office discovered. There were no records, no updates, and no progress reports, just plain old nothing. Once one branch fell, the damage flowed through the rest of the branches, even the older ones. Everything collapsed upon one another like trees falling down.

Instead of waiting for the holidays to pass, give everyone a chance to enjoy themselves, before trying to untangle the mess, the CEO decided it was best to send someone to figure out what was happening. Of course the boss could enjoy his holiday at home with his family and not give a shit about traveling. Of course they placed those duties on the low-man on the totem pole.

"The idiot who tries to be the perfect employee by agreeing to all kinds of idiotic shit," Julian Tucker muttered to himself as he moved through the Denver airport on this snowy New Year's Eve night.

This was not his plan on how to spend New Year's Eve. His initial plans with his boyfriend, Carson, and their friends were to celebrate at their favorite dance club. The club held a special tails-n-boxers party for New Year's Eve. All the fellas would come in black tuxedo jackets with their favorite silk boxers.

The party took place at home in Atlanta, not Denver.

He had his favorite tuxedo jacket pressed and ready to go and paired it with a new pair of indigo silk boxers that hugged his ass. Carson had the same set-up, but his boxers were an emerald color and were sexy as hell. Instead of being at the club with Carson and others, dancing in their sexy boxers, he was stuck in another airport.

Julian left several voice mails and text messages, but Carson hadn't returned any of them. He couldn't blame his boyfriend for being pissed off at him. How could they try to have a relationship when one of them was never around? He hated being alone, stuck in different hotels, sleeping on his own, and traveling. Shit, traveling around the world all the time was exhausting and increased his frustration with this damn job. At this point it wasn't worth the damn money.

Hell, he could program and crack algorithms and codes for some other company that wouldn't ship him off to everywhere in the world.

The schedule sucked big time. The final flight and fix at a branch brought him to this point of sitting in a Denver airport during New Year's Eve. The only good point was receiving a call from the Atlanta office. The problems stopped escalating after he updated and corrected the algorithms in the Denver branch. So instead of heading up to Chicago, the main office changed his flight to home, to Atlanta.

Checking his ticket for the boarding time, he knocked back the rest of the bourbon. Leaving money on the bar, he gathered the carry-on suitcase filled with clothes he kept getting dry-cleaned and his messenger bag that acted like a traveling briefcase.

Walking through the somewhat deserted terminal toward the gate, Julian settled in another uncomfortable chair. Able to look out the wall of windows over the tarmac, he didn't like the look of the dark skies filled with heavy gray clouds and falling snow. This storm blew in yesterday while he fiddled with the algorithms, built into a massive blizzard, and hadn't let up since.

He looked up at the closest TV and found the station tuned to one of the many televised New Year's Eve parties. The party just started since the countdown clock said two hours of party time and music until the shiny ball dropped in Times Square.

There were only a few other travelers with him at the gate. The closest was a fellow in fitted slacks in a charcoal color, combined with a faded deep gray T-shirt, and a wrinkled sports coat lying across his legs. Propped in one chair, he stretched his long legs across to the opposite chair, ankles crossed over one another. Stubble covered his jaw and matched the mess of dark auburn curls on his head. With arms resting on his chest, he tucked his chin down, eyes closed, as he tried to catch some sleep. Next to his chair was a set of battered Converse sneakers and a set of mismatched luggage. Both were in a bright blue color. Julian recognized one of them as the popular spinner bags.

What caught his attention was the odd type of a well-padded backpack. He couldn't figure out the strange array of pockets. One opened from the side while another had the normal top zipper. Instead of being a plain color, colorful logos of almost every type of superhero and team available covered the backpack. He found everything from the Avengers, to Guardians of the Galaxy, Captain America, Green Lantern, X-Men, and so many others. It was an awesome array of logos from Marvel and DC Comics and included some of the smaller companies, Image, Dark Horse, and IDW.

Pulling his attention from the colorful backpack, Julian drifted back to the man and admired the long legs. He stopped at the stocking-covered feet and realized the print was tiny rainbows. He didn't think a straight man would wear those, unless he wore them for his kids. A quick check of the hands, and Julian didn't see a ring.

Nope, it looks like he bats for my side. Shit...

Why would he lust after some stranger?

Julian scrubbed his hands over his face, trying to push back the exhaustion from all the traveling and stress.

There was no reason to check out a virtual stranger when beautiful, sweet, loving Carson wanted him at home. The manager of an independent bookstore, Carson loved everything about books. Carson was always reading and often spoke about the stories he read, authors he met at different signings, and the store.

Desperate to reach Carson and reassure himself of their connection, Julian dug into the pocket of his military-detailed pea coat. He tugged out his phone and mini earphone. Tucking the earphone in place, he hit the speed-dial for Carson. He silently pleaded for his lover to answer. He didn't want to leave yet another voicemail. While he waited, he plied his fingers along the thigh-length hem of the cashmere blend coat.

"Carson, hi, I didn't know if I could catch you. I have great news! I wanted to let you know I'm heading home. Things are fixed, and I'm at the airport waiting for the flight to Atlanta. I don't know if I can get home in time for the party, but I will be with you for New Year's Day. We can celebrate together when I get home," Julian said, rushing through all the news, eagerness in his voice to share everything with his boyfriend. "Where have you been? I left several messages and voicemails. Why hadn't you called me back?"

"Carson, who is it? We need to get to the club," someone else said on the other side of the line. The voice was so close and sounded like the person stood damn close to Carson.

"Carson? What's going on? Who is that?" Julian asked.

"Derek, give me a moment to deal with this. It's my ex," Carson said in a low tone.

Julian felt his mouth dry out and his voice strangled around the word, "Ex?"

The other man asked, "Is it the workaholic?"

"Yeah, I need to talk to him. Don't worry. The party isn't going anywhere. Only reason we're running late is because your sexy self is irresistible in those cotton boxers," Carson said.

There was no mistaking the throaty laughs of lovers with secrets or the shared kiss.

"Well, hurry it up. You know I want to dance before the ball drops," the other man said.

"I'm not letting this night go without a dance. Let me handle this, baby. We have time." Handling the other private conversation Julian never wanted to hear, Carson returned to his conversation with Julian. "Sorry about that. I figured if I didn't call back or pick up, you would get the message."

"What message? Why is there another man in our condo?"

"I can't do this anymore and I'm not at your condo."

"Can't do what?" Julian concentrated first on the relationship problem before he tried to figure out where Carson was with this other man.

"Us, this so-called relationship. It doesn't work when one of us is never here."

"Please, don't. This was a freaking fluke of computers." 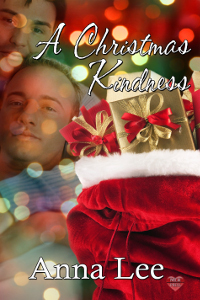