Estella, Vampire Queen of the Rejected, is sick of men. Or so she would have you think. Ditched at the altar by Dracula himself, she'd rather spend her days with what she now believes to be the more faithful gender. Plagued by a Haversham complex, she gets her kicks by luring prey into her decrepit house with promises of erotic tales...but mind your manners, and fingers, because she bites. Lucy Rotterdayne—a zombie better known as Lucy Rot—is Estella's sometimes-faithful subject and lover. Although why she hangs around to be ridiculed and taunted by a bitter vampire, she has no idea. Perhaps the answer is rooted the story of how she was zombified by a doctor who was simply masterful with his hands? 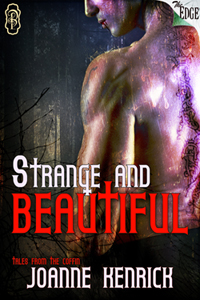 “Fancy bursting into my boudoir and expecting me to entertain on demand. The cheek of it. You people have no manners.” Estella puffed her raspberry-red hair into something that resembled an up-do and readjusted her breasts, shoving her plump flesh back into her once-upon-a-time-white corset. “I know. The word is out. I give great story. I do understand. You’re excited, who wouldn’t be? I am rather marvelous, if I do say so myself.

“In my day, though, the men held doors open for ladies, and the ladies tilted their necks to offer supper. Oh, no need to wrap that sweater farther up your jugular, dear, I’ve already eaten, so I’m not hungry…at the moment.” Estella stretched her arms out, licked her canines, and hoisted her moth-hole-ridden skirt to expose her alabaster thighs decorated with stockings laddered at the knees and splattered with fresh blood. “I can’t vouch for Lucy, though. She’s always hungry, aren’t you my little Deady Bear.”

Lucy groaned, burped, and stretched her neck out—to the right. Crack. To the left. Crunch—and dragged toward her mistress.

“Quit being disgusting and help me out of this coffin, would you?”

“Yes, boss.” Lucy, her mostly-faithful servant, dragged herself across the neglected basement in their decaying house in the outskirts of York—the supernatural center of England—to her mistress while cursing her gammy leg and zombie disabilities. Minutes later, she parked her behind on the edge of Estella’s coffin and snaked her hand up her leg, smearing the blood as she went. “Finger-licking good,” she crooned before trailing her tongue over the torn material decorating Estella’s skin. She paused and held her hand up. “Shame I’m missing two of them. Wonder where I lost them? You’d think I’d feel them snapping off, wouldn’t you? Have you seen them?”

Tsking, Estella kicked her off and turned her nose up. Not because she needed to dominate Lucy—she had already put her in her place—but because she knew where those fingers were. And she didn’t want the poor dear to read the truth in her eyes. “I ordered you to help me out of my coffin, not suck my joint. My goodness, your hunger for flesh is insatiable. What was I thinking taking in a zombie? Blonde and curvy you may be, but you’re always trying to gobble me up.”