Can these ex-lovers work together to save New York City's children?

Caleb and Laura were teenage sweethearts, poised on the edge of a beautiful future, then without explanation, Laura walked out. Now both are cops and have been partnered up to bring down a notorious criminal who is exploiting New York City's innocent children. Can they put aside old hurts to save the children, and will the flames of rekindled passion be enough to give their love a second chance? 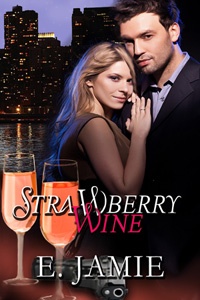 She also blamed the beers for the fact that poker had now become strip poker, Laura mused, watching Caleb on the floor across from her. He was shirtless, pant-less, wearing nothing but boxers and one sock and shoe on his left foot after a lengthy debate where he'd insisted that shoes did count as clothes. It was sad, really, and Laura almost felt guilty when she laid down her hand. Full house.

"I hate this game," Caleb grumbled, kicking off his other shoe.

He lost a sock next.

"You okay?" he asked, looking up from his cards.

"Hmm? Fine," Laura replied, distracted. Could she ever tell him? Was it wrong of her to keep this from him when there truly was no benefit she could see to him learning about a child he'd never known? Laura took another long drink from her beer bottle. This one was getting warm, but her body was starting to get heavy and lazy. She didn't think she'd have the energy to pay the fridge another visit.

He's gonna have a freaking aneurism. He's gonna shit himself. Could he ever love me again? Will he ever want me again? Will he think I did it on purpose? No. Laura knew he wouldn't believe that last one. Thankfully, a nice numbness was beginning to settle over her, and she knew soon enough she wouldn't have to think about frightening questions or anything except the fact Caleb was there with her. They were laughing and being comfortable with each other, and it was wonderful.

There was also that other thing pulsing between them that even too many bottles of alcohol couldn't dull. Desire. Strong and hot, and she didn't know if it was just the beers, but she wondered if it was okay to give in to it. God, she ached for him.

"It's just that you're not doing that annoying happy dance you always do when you win a hand."

"I thought I'd restrain myself. Wouldn't want to wound your pride any more than usual," Laura said, her mouth dry. She took another drink.

He threw a quarter at her head. "Thanks."

"Not to mention all that dancing would have me exhausted by now," she teased with a smile.

He narrowed his eyes at her. "I call."

She laid her cards down, and then Caleb followed. He blinked. Looked up at her and then down at the cards, and a slow grin spread on his face.

"I'll be damned. I won! I freaking won! Ha!" he exclaimed gleefully. "Lookie there, you blonde midget! I won! I, Caleb McKinney, beat the great Laura Thatcher! Hee hee!" Then he got to his feet and, in nothing but his boxers, mimicked her happy dance, which was nothing more than swinging his fists and hips side to side around the living room.

"Get your sweet ass back here, McKinney. The game ain't over 'til someone gets naked," she reminded him, giggling, glad for the lighthearted respite from her heavy thoughts.

"Oh, that's right!" He whistled and pointed at her. "Get naked, baby!" His hair was in disarray, and he took a long drink, finishing the bottle and setting it next to the other empties. His stubbled face was flushed, making the blue of his eyes all the more intense.

Then he tackled her, pressing his fingers into her sides, and Laura squirmed and squealed beneath him. He nibbled on her collarbone and began to work his way south. The lower he went, the less laughing either of them were doing. He dotted sweet, quick kisses along her stomach, and she sighed, playing with his hair.

Caleb closed his eyes, and when he started to breathe deep and heavy, she thought he'd fallen asleep. But instead, he brought her closer to him and moved up along her body to nuzzle her forehead, moving his mouth over the bridge of her nose and lower until he hovered just above her lips. Laura watched and didn't stop him when they both knew she should.

The carpet was soft against her back. It smelled faintly of lemon carpet cleaner.

Caleb kissed her. His hand slid up into her hair, and he tilted her head back to open her mouth.

It felt so wonderfully right and excruciatingly wrong, and Laura wanted him to stop and wanted him to keep going. Her mind was spinning in a thousand different directions while she moved restlessly beneath him. Alarm bells told her they were both too drunk. This couldn't happen now because they would both regret it in the morning, but she didn't have the willpower to stop.

She'd missed this so very much, his hands on her skin, his breath against her face, the feel of his body claiming hers with deep, hot urgency. Nothing had ever matched the intensity of this man's possession of her.

Her heart was swelling and breaking all at the same time. Laura met Caleb's tongue with her own, and he gave a low whimper before rolling over on the carpet and pulling her up on top of him.

"God, Laura. Stop me. For God's sake, stop me," he moaned, running his hands under her shirt.

Laura shivered. "No," she said, pressing her hips down to feel him thick between her legs. Why not? she reasoned desperately. Hadn't they suffered enough? Didn't they deserve this moment to just let go and remember how good they used to be?

Even if you're still lying to him?

My Midnight Visitor
Little Dickins
In Shelf
$2.99
Tweets by
sirenbookstrand