Hunky security experts Will and Gage Anderson meet the tall, toned, and adventurous Sella on a ski vacation in Spirit, Colorado, and are immediately drawn to her in a way they don’t understand. When she tells them they are lion shifters, they don’t believe her. The preposterous idea intrigues Will, but Gage wants nothing to do with this potentially life-altering event.

Their skepticism is put to rest when Sella’s friends teach them to shift. Will and Gage are soon called upon to use their enhanced abilities to fight off a large group of enemy wolf shifters. Sella sees the men’s instinctive, selfless bravery tested in the heat of battle and insists on taking them to Anterra to heal their wounds. How can they keep both the loving ménage relationship they have with Sella and their rich lifestyle they’ve worked so hard to create in Miami? 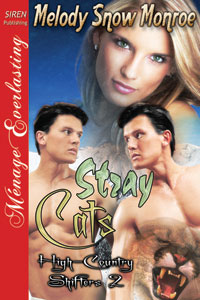 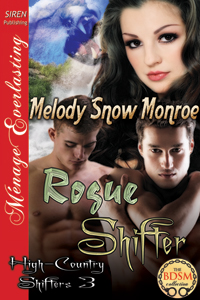 Sella failed to hold back the tears, believing she would never see Will or Gage again. Even if they came back to Spirit next year to ski, there would be no way for them to contact her. She must have wiped her eyes a dozen or more times, but no one said anything.

At least if Will and Gage lived in Spirit, she could sneak over whenever Malik and Cavon came back. Amy was lucky in that regard. It wouldn’t be the end for them.

They had another fifteen minutes to go before reaching the alignment point when Cavon and Malik stopped.

Both men shook hands with Will and Gage. Malik inhaled. “We’re going to go on ahead and find the alignment point. It has shifted, and we hope it is still within reach.” He faced her. “Don’t stop for any reason.”

She understood all too well how fickle that damned point was. “Go.”

She closed her eyes right before the two flashes occurred. They raced down the trail, their sleek bodies quickly disappearing. She reached out and clasped her men’s hands, needing the comfort for a little while longer. “I want to thank you both for showing me so much. This is an experience I will never forget.”

Will squeezed her hand. “Trust me when I say this trip was more memorable for Gage and me than you can imagine. We’ll never forget you.” His voice wavered.

While they had to hurry, she didn’t push Will away when he drew her near for a kiss. Something deep inside her exploded. A need so intense nearly felled her. This time she leaned back. “It will only make our parting worse.”

He looked away and was probably glad that it was dark outside so she couldn’t see if his eyes watered. They picked up their pace while Gage kept the beam of the flashlight in front of them.

They kept quiet for the next few minutes. Then as if they all heard the ruckus at once, they stopped. Not only was the hair on the back of her neck bristling and her stomach turning, but a ton of other visceral reactions were sparking everywhere.

Gage let go of her hand and moved in front of her. “What does it mean?”

She almost didn’t want to tell them. “Wolf shifters.”

All three broke into a run. Without warning Gage and Will shifted. Damn it. They had no idea how to fight. She reached the horrific scene totally out of breath. There were at least a dozen of those damned frigging animals attacking Malik and Cavon. The squeals and howls nearly deafened her, and she screamed, though that was the last thing any one of them needed.

Blood coated her best friends’ bodies. How they weren’t dead already she didn’t know. On a good day, Malik could take on four wolves and maybe live. With this many, they didn’t stand a chance, and her heart hitched. She wanted to cover her eyes, but she feared the wolves might come after her.

Part of her wanted to run, but the other wanted to stay and clean up the death that was sure to occur. Cavon and Malik moved apart, and she spotted a fairly large wolf on the ground, his throat torn out. She prayed he might be the pack leader. If that were the case the odds just shifted to the lions’ favor, if only a little bit. Then she spotted two bigger wolves hovering in the back as if both were sending out instructions to their team. Damn.

Will and Gage hovered off to the side as if they were deciding what to do. Oh, shit. Their noble hearts would make them join the fray. “Don’t!” Her two men might be able to shift into lions, but they had absolutely no idea what that entailed. They also might own a security firm, but she bet they used guns and had never gone against a sentient animal.

They leaned back, and she screamed again. She wouldn’t survive if all four of them died. Will and Gage ignored her frantic plea and leaped into the fray. Her breath caught. Tears burned her eyes. All four men were going to die, and there wasn’t a damned thing she could do about it.

Sella’s fingers were trembling when she finished unzipping Gage’s pants. “Hmm. Who do I want to play with first?”

Gage stepped forward. “Which one of us would give you the greatest pleasure?”

She tossed them an exaggerated frown. “Rule number one. There will never be any fighting or jealousy while I am around. Neither of you will take it personally if I attend to one first then the other.” She held up a finger. “I will try to be fair. Does that work?” Because if it didn’t, their relationship was doomed from the start.

Both grinned. “Sugar, as long we both get to touch you and love you, you can do whatever you want, whenever you want.”

“That perfect answer grants you the right to go first.”

When she spotted how his cock was tenting his briefs, sparks spread over her entire body, pebbling her tits. For some reason, she’d worn a light top to work today even though Rein had made fun of her. Now she wished she hadn’t.

Gage shucked off his boots, climbed on the bed behind her, and lifted that top right off her. “While you’re taking care of my brother, I’m going to help myself to you.”

She couldn’t be more delighted. The first touch nearly lifted her off the bed. There was no way she could do justice to either man’s cock with Gage playing with any part of her body.

“I need to concentrate. Gage, you’ll have to wait your turn. Please stand in front.”

“Spoilsport.” He pressed on her nipples, and she squealed in delight.

These two were going to be a handful. Once Gage moved in front, she tugged down his jeans, too. “You can both step out of your cold-weather attire.” Quicker than they could shift, they were in their briefs and shirts.

Standing on the bed, she lifted off their shirts. They rippled their muscles, and it had the desired effect by sending streaks of pleasure straight to her pussy. She’d missed her men. Now that they were right in front of her, she didn’t know what to nibble on first.

Gage was the first to reach her. After he clamped his hands on her waist, he lifted her off the bed and set her in front of him, and made sure to rub his chest against her nipples and his cock over her skirt.

She had said she was going to suck on Will first, but with Gage in her arms, she couldn’t resist leaning over and licking his gloriously flat nipples. He jerked.

“Sugar, I thought I got to go first.”

“You’ll get your turn.” She looked up at Gage, pulled down his head and licked his cheek.

Before had a chance to respond, she stepped out of his grasp and slipped Will’s underwear down to his ankles and told him to take them off.

“Oh, my. Why is it every time I get near your cock, it seems to have grown?”

He grinned. “I told you. When we shift, our cocks get bigger. It’s a human thing.”

She laughed. His humor was one of the many things she loved about him. “Is that so? Do you think it will get bigger if I suck on it?”

He winked. “I can guarantee it.”

She leaned over and zigzagged her tongue up and down his cock. Will grabbed her shoulders and hissed.

Gage was not behaving, because after he wrapped his arms around her body, he cupped her tits. At the same time he pressed his cock against her ass. Somehow her men weren’t doing well with the idea of waiting their turn. When Gage pressed on her nipples and gently twisted them, memories of their past encounter came flooding back. She moved her rear backward for more contact, and he responded by tightening his hold. Her inner walls contracted over and over again as fingers of pleasure massaged her.

There was no way she was going to be able to last. Once she relented, she feared her climaxes would come so rapidly she’d be too exhausted to please her men.

Will tapped her shoulder. “Ah, Sella?”

Whoops. She had been so intent on the carnal lust coursing through her that she’d stopped sucking on his tumescent cock. She looked up and smiled before cupping his hard sac and then drawing the mushroom-shaped head into her mouth. As soon as she increased the suction, Will jerked. His sensitivity pleased her to no end.

“You have too many clothes on, Sella.” Gage slipped the waistband over her hips.

She probably should have shooed him away, but she wanted his hands on her ass. His promise to pack her ass full with his cock remained ever present in her memory.

“Step out of the skirt.”

She managed to kick the skirt out of the way while still continuing to enjoy Will. Opening her mouth a little, she slid halfway down his length before she ran out of room. To cover the missing space, she wrapped her palm around his cock and tightened her hold.

“Sella, I’m sorry, but if you lick me one more time, I will explode, and that is the last thing I want to do right now.”

She loved how his voice cracked. Being in a merciful mood, she did as he requested. She wasn’t sure where Gage found the lube, but the smell of something minty floated in the air.

He squeezed her ass. “I’ve never stopped dreaming of your creamy orbs.”

Will lifted her shoulders. “I think we need to take this to the bed. I want to be able to explore every glorious inch of your body.”

Gage removed his briefs and kicked them aside. All three climbed onto the bed. Before she could figure out where to position herself, Will and Gage placed her on her back.

Will circled one nipple with his forefinger. “I wish we had something to tie you down. Since we don’t, will you promise to keep your hands to yourself?”

She’d promise anything, but that didn’t mean she planned on obeying. “Anything you say.”

Gage tapped her pussy. “If you are bad, we’ll have to punish you.”

From the half smile on his face, she’d love getting punished by him. “Oh, yes, Master.” 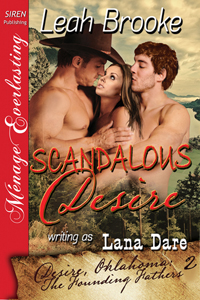 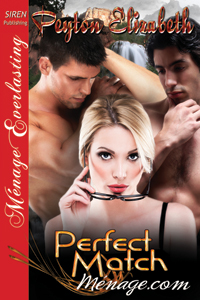 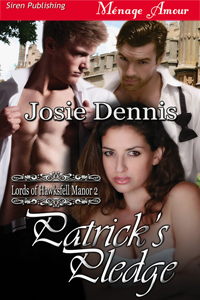 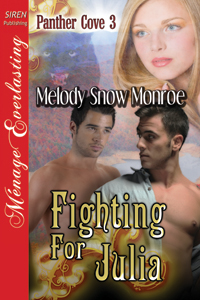 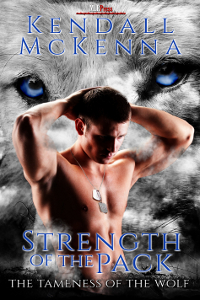 Strength of the Pack
Kendall McKenna
In Shelf
$8.99 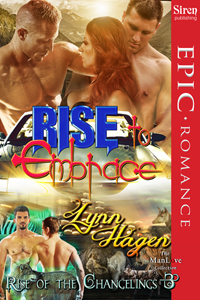 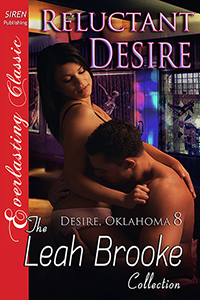 The Legend of the Diamond Globe (MMMM)
Evelise Archer
In Shelf
$3.99

Mate Her (MFMM)
Jenika Snow
In Shelf
$3.99
Tweets by
sirenbookstrand