Charly Wynn has taken the detour to Wilde, Nevada, and the six hot cowboys she's found there have turned her life upside down. With little money and her car in the shop, she agrees to Heath Strong's offer to transport her to Malibu.

Heath Strong is thrilled to spend time alone with the gorgeous city girl. During the trip, an unquenchable hunger for her ignites inside him. He is determined to possess her for himself, Nate, and Tobias, despite the intentions of his other brothers—Drake, Dax, and Seth.

Though Charly's plan has always been to land a job that will provide what she needs to help her mother, Heath's dominance is reaching her heart and shaking her resolve. While Charly discovers the pleasures provided by him and his brothers, a murderer plots his revenge. Will she choose the path that leads to love or the one that leads…to death?

NOTE! You are purchasing Siren's newest serialized imprint, the LoveXtreme Forever Series. This is Book 2 of 7 in the The Strong Cowboys of Wilde, Nevada collection. These books are not stand alone. Each is a continuation of the previous book and must be read in the numbered order. Each book may end on a cliffhanger but usually with a happy-for-now for the heroine and one or more men. The final book contains a happily forever after for the heroine and all her men.

Heat Rating: Sextreme
Word Count: 23,645
18 Ratings (4.2)
Contemporary Menage a Trois/Quatre Western/Cowboys
In Bookshelf
In Cart
In Wish List
Available formats
HTML
PDF
Mobi
ePub
Cover Art by Les Byerley
Reviews
I enjoyed this installment of The Strong Cowboys of Wilde, Nevada
Well, things are hotting up as there are two factions within the Strong brothers and both are 'staking a claim' on Charly. I'm not quite sure why she's so popular but, hey, they like her and she's up for a good menage, so go girl. Thank goodness there were less "fuck, fuck, fuckity, fucks" here. I must go on record and say I rather liked (coveted) Heath - manipulative, neanderthal that he is - he's one sexy cowboy. The sex was smoking hot, I do like that. Looking forward to installment 3 in this series. I'm still not fond of the linked series format, but I am getting into this series and Chloe Lang is nothing if not passionate with her characters, especially the men.
KazzaK
Another fantastic addition to the new series!! I can't wait for the next chapter!!
Tina D
Read more...

Holding a calla lily, Charly walked up the aisle with Michael, Jessie’s ex-fiancé. The room was filled to the max, with every seat taken and people standing in all the free spaces of the little chapel. The middle aisle, littered with rose petals, remained empty. The wedding party stood at the front, waiting for the bride to appear. But the ones who captured her attention immediately were the Strong brothers.

Drake smiled broadly at her, making her lips curl up. Tobias and Nate tilted their heads to her in a lusty way. Seth also smiled, as did Dax. Then she saw Heath. He sent her a wicked wink, and her heartbeat sped up. Something about that man unhinged her every time she was near him.

Michael and Heath had similar roles for the service. Odd. With two best men, one for the bride and one for the grooms, this wasn’t like any marriage ceremony Charly had ever attended.

A string trio played soft wedding music. She loved the scent of spring flowers that filled the air.

Charly and Michael took their places with the other attendants, six of which were all the Strong brothers, cousins to the Wilde boys. Though the six cowboys seemed focused on the service, Charly caught all of them glancing her way. Wilde, Nevada, was one crazy town.

The music changed to the familiar bridal entrance tune of “Here Comes the Bride.” The crowd all stood, and Jessie appeared in the back with Jessie’s dad, who was Charly’s uncle, and Lee, Jessie’s recently discovered biological dad. The men looked on her with incredible pride. The three began marching down the aisle slowly, but all eyes were on the most beautiful bride Charly had ever seen.

Jessie’s bridal dress was beaded. Her hair was up. She wore a platinum circlet around her neck that had a single diamond hanging from it. Behind the sheer veil, the new bride was totally aglow and smiling.

“Are those actual tears from you, ‘Tough As Nails’ Charly Wynn?” Michael whispered by her side.

“Behave,” she scolded quietly and then sent him a grin as she wiped her eyes.

The ceremony was pretty basic to Charly, sans the five-grooms-and-one-bride oddity. At the rehearsal she’d learned how that difference was going to be handled. Each groom, one by one, was going to stand by Jessie and give his vow of forever to her.

The first was Jackson. “I, Jackson Wilde, take you, Jessica Greene, to be my...”

“What color are you, sweetheart?” Heath asked, concern evident in his tone.

No man, not even her father, had ever told her that before. Life had been difficult for her for some time. A sick mother, a felon for a father. But she’d risen above all of it. She’d earned her degrees and was on track for a great job. But the race to succeed and prove her worthiness to herself and world had taken its toll on her. Something about these men taking charge reached her, releasing a need to just be. Cravings to please them and to be pleasured by them rolled through her.

“Good girl.” Nate’s commanding voice shook her. “Now, about those silly thoughts swirling in you. I want you to surrender to me…to us, tonight. Now, bite the pillow for me.”

She obeyed, bracing for whatever would come next.

Nate rained down some blistering smacks to her ass.

These were harder and delivered more pain than Heath’s had. The more he tortured her bottom, the more her mind softened and cleared.

She was thrashing and sobbing on the bed, but the pain was only a part of the cause. Her pussy was soaked, and her nipples were hard. She was deliriously dizzy and in a kind of warm trance. Finally, all she could do was feel.

She sniffled, releasing the pillowcase from her teeth. “Y–Yes, M–Master Nate.”

The cowboys flipped her around, placing her gently with her back to the mattress.

She looked at them, staring down at her in what seemed like a state of awe and lust. “Thank you, Masters.”

They all three smiled.

Heath stepped back, and Nate and Tobias crawled in on opposite sides of her, each cowboy swallowing one of her breasts.

She fisted the sheets and closed her eyes as need grew inside her. Then she felt Heath move between her thighs, positioning his head directly in line with her pussy. When his tongue hit her folds, she moaned. Nate and Tobias sucked on her nipples until they ached and throbbed. Heath licked her clit, making her crazy with want.

Nate’s teeth nipped at her breast’s tiny bit of flesh. Then he said, “Yep. You’re going to be trouble, pet. That’s obvious.”

She opened her eyes and looked directly at Nate. “I–I…don’t want to be.”

“Sure you do. That’s part of it.” He and Heath switched positions.

Tobias continued to suck on her nipples while Nate bathed her puffy folds with his tongue. She writhed on the bed like a live wire. Heat sprung up out of her, and her juices flowed from her pussy.

Heath covered her mouth with his manly lips once again, causing her heart to race. In that single kiss she sensed his absolute possessive nature. Her lips ached and swelled, mirroring what was going on with her nipples and pussy. These three cowboys were making her utterly delirious. She was on fire with want. The desire to be taken by more than one man had been born in her during her stay in Wilde. Now, that desire was full-grown and running amok inside her. Her body quivered, and her toes curled as three mouths covered every inch of her body.

“She’s got the sweetest juices I’ve ever tasted in my life, and her pussy is the prettiest one I’ve ever seen.” Nate’s tone was animallike and intense.

When his tongue circled her clit once again, her ache burned hot like the sun.

Heath kissed her. “That’s my girl.”

She felt Tobias apply lube to her ass.

Nate kissed her mound and then rolled onto his side. He donned a condom, as did Tobias.

Heath cupped her chin, making her look directly into his eyes. “We’re all going to fuck you at the same time—Nate in your pussy, Tobias in your ass, and me in your sweet mouth.” 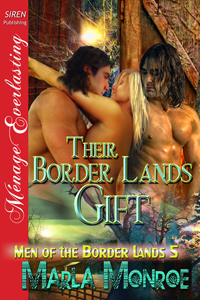