Stronger Where It Counts (MM)

IT guy Michael figures he's in for an awkward evening when a client takes him to a girlie bar. When he gets talking to big, blond Kyle, it seems like it's his lucky night after all. But they have a shared past Michael's managed to forget and Kyle is hoping he won't remember.

Kyle's deeply ashamed of his weakness back in high school, when he stood by and watched as Michael became the victim of a gay-bashing -- by new boy Kyle's group of friends. He's going to have his work cut out to persuade Michael to take a chance at trusting him now. 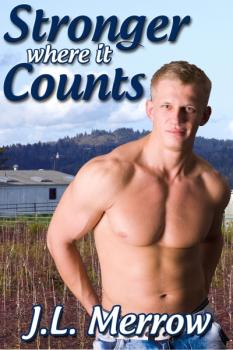 Stronger Where It Counts (MM)

The show starts just as we get our drinks, which is a mercy as at least I can hide behind my glass. Although right now I’m wishing I’d claimed Irish ancestry and ordered a Guinness, as I can still see way too much of the action through my beer. The girl on stage is wearing a Stetson and not a whole lot else, and I resign myself to a long evening.

With all of this female flesh on display, I figure there’s got to be some muscle around somewhere to make sure the clientele stays in line. I look around between acts, guessing if I don’t have my eyes glued to those titties while they’re out there, sooner or late Rufus T’s going to ask me why I’m not watching the show, and then I’ll have to tell him. And trust me, I’ve been there before, and it ain’t pretty.

Anyhow, my eyes stray to the bar and there he is in all his glory, faded blue T-shirt having to do some serious work to stretch over the best pair of pecs I’ve seen in a long while. He's wiping a glass while his eyes are coasting around the joint looking for trouble.

I check to make sure my tongue isn’t hanging out because I'll be damned if this guy isn’t going to keep me in fantasies for weeks. Months, maybe. Hell, years even; I don’t get out a whole lot. It’s not immediately apparent until the waitress goes up to the bar just how damn big this guy is. He’s so in proportion he just looks like a normal (okay, damn fit) guy until then. But when little Missy struts her stuff up to him in her four-inch heels that have got to be giving her hell by the end of a shift you suddenly realise this guy is huge. For half a moment I expect Missy to be dragged into orbit around him.

He’s blond, too. Some guys have all the luck.

As I look at that clean-cut face and that lazy smile I’m thinking he seems a little familiar somehow, which makes me freeze for a heartbeat or six -- see, I didn’t always live in the city. Up until age fourteen I grew up in a town not ten miles from here. Mom and Dad moved out to the boondocks when they were expecting my eldest brother, figuring the country would be a better place to raise kids. Well, I guess it worked for the other three.

Anyhow, like I said, my heart kind of stutters for a moment and then reality comes riding to the rescue, telling me straight that if there had been a guy like that in my past I’d have remembered him. Hell, he’s just a type, that’s all. Your stereotypical, good-looking All-American boy. Goes to church on Sundays and is kind to his momma. They’re a dime a dozen in the kind of magazines I like to read one-handed.

I feast my eyes on him just a little longer, and then I drag my gaze away. Self-preservation? I could write a book.

Another act starts up and I realise Rufus T is the kind of man who gets louder the more he drinks. He’s getting kind of frisky, too, patting Missy on the ass as she brings him another beer. She just smiles round her gum. I guess she’s angling for a tip. The girl on stage starts doing something with a feather boa that’s making me feel kind of queasy so I lean forward and tap Rufus T on the shoulder.

“Listen, Mister Earle, I got a take a break.”

Rufus T leers at me. “No need to hurry, boy. Takes a lot of young men that way, their first time in a place like this.”

Oh my God, he thinks I’m going to the restroom to jerk one off.