Ambreton Nightshade works for the breed company SUC-U, which stands broadly for Succubus United. She’s nearing her one thousandth birthday when the heartthrob that has been causing all the sucs to drool in the break room calls. The suc he ordered the night before did not show up. Unheard of!

Bre sees her chance, issuing a full refund and an offer for the approaching night no red blooded male could ever refuse, she makes her case.

Will she take this client beyond the ecstasy her sisters have already taken him to, and once she actually claps eyes upon him, is she ever going to let any of those sisters near his prime meat again? 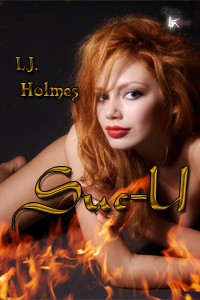 Slowly, quietly, her heart beat and his softened huffs the only sounds punctuating the endlessness of night, she reached her right hand toward him. She’d decided to begin with that proudly plump big toe on his left foot. Could he be ticklish? Did she want him giggling from her touch, or gasping from the searing hot brand of her fingers dancing across his skin?

How many sucs before her had stood here pondering the banquet of wealth before them? She hated every single one of them and hoped they’d burn in the fiery pits of hell.

Not a charitable attitude to have, but she had no charity in her where Drake Phaeton seemed to be concerned.

She did not understand her fury. Just like her, all previous sucs were just doing their jobs. That did not matter one whit to her now. She would scratch the scales off of any of her sisters if they ever approached Drake Phaeton again!