“What’s the difference?” Phil manhandled a big bin liner full of crap into the skip.

“One’s make-believe while the other is very much real.”

Phil Rowling, a normal eighteen-year-old, discovers this when he is plucked from a dead-end life of fast-food service and enrolled into Wargsnouts College for Warlocks. At the college students are taught how to summon and control daemons from Hell.

Everyone at Wargsnouts knows what a succubus is, and why warlocks summon them. It’s a dirty joke shared in sniggers amongst the students. Succubi are female sex daemons, famed for their mastery of the arts of pleasure. Eager to experience this pleasure first-hand, Phil and his friend, Jake Pulman, take the Daemonica Malefique from the library and use it to summon a pair of succubi for a night of sexy fun. After all, succubi are sex daemons, used only for sex, how dangerous can it be… 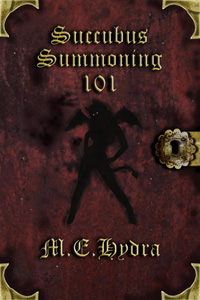 She wasn’t human, just like the sexy red-haired girl on the bed behind him. Wide green bat wings were folded up behind her back. A smaller pair of wings grew out of her head, just behind her dainty, pointed ears. An equally dainty pair of green horns grew out of her forehead. The final touch to her daemonic appearance was provided by a slender green devil’s tail, complete with arrow-pointed tip.

“You took your time,” the red-haired succubus on the bed said. “I’ve already finished mine.”

“I was busy.” The green-haired succubus replied. Her wide green eyes sparkled and Phil wasn’t so sure he wanted to know what ‘busy’ meant. The succubus smiled hungrily at him.

“Baby warlocks, playing with things they don’t understand,” the succubus on the bed replied.

The green-haired succubus stared down at the line of an arcane chalk circle. It was supposed to restrict her to the bed and force her to obey his commands.

“I see,” she said, lifting a dainty foot over the line. “I doubt this circle would hold even a feculoid imp. Are you sure they aren’t seeking suicide by succubus?”

“No, they’re just really dumb,” the red-haired succubus said. “They thought I couldn’t drain them through my ass.”

Fuck you, Scrote, you lying bastard, Phil thought. You put Jake up to this.

“That’s good,” the green-haired succubus said. “I find it very unsatisfying when they actually want you to drain their life.”

“They all want us to suck them dry,” the red-haired succubus replied. “Ultimately.”

“Ah, but taking unwilling prey to that moment of sweet surrender is the true pleasure.” The green-haired succubus looked at Phil and smiled. “For both parties,” she added meaningfully.

Run, Phil thought. Run now. The door was only a few metres away. The east tower was mainly deserted, but if he shouted loud enough maybe someone from Wargsnouts’ security might hear him.

His feet refused to move. He was frozen to the spot.

“Look at him,” the green-haired succubus said. “The poor baby’s practically shaking in terror. That’s so typical of you, Rosa. I bet you sucked his friend dry without even bothering to introduce yourself first. You’re so greedy sometimes.”

“Hmpth,” the other succubus, Rosa, snorted. “Next time they might let me finish a sentence before they push me face down into the covers and fuck my ass.”

The green-haired girl was right in front of him now. She was a couple of inches shorter than Phil and looked up at him with bright green eyes.

“Hello baby warlock, I’m Verdé.” She put her arms around his waist and pulled him forward into her embrace. Her green bat wings opened wide and enfolded him.

A cloud of her exotic perfume surrounded him. It suffused his nostrils and sent his blood racing while detaching his brain behind a soft focus filter. She pulled him close, squashing her full breasts against his chest as her wings rubbed against his back like a latex skin. She teasingly rubbed her mons against his crotch.

“I’m going to fly your body straight to heaven,” she said, flashing him a sunny smile.

And take my soul straight to hell, Phil thought.