Claudia works with them both and isn’t happy when Mitch rejects her advances. Not willing to take no for an answer she uses every form of manipulation to drive the couple apart. Is their relationship strong enough to handle the betrayal that they believe to be true? Or will the thought of losing each other be the catalyst to keep them together? 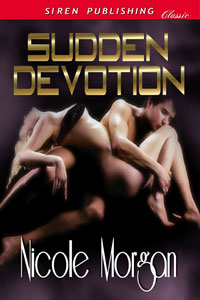 5 DELIGHTFUL DIVAS, RECOMMENDED READ: "I just finished Nicole Morgan's Sudden Devotion and it completely knocked my socks off. It has everything: drama, love, unbridled desire and sex, compassion, heart wrenching conflict, a conniving evil sociopath…damn, it was awesome. Sigh! It’s a joyous, turbulent, emotional rollercoaster ride that you definitely don’t want to miss. Sara, Mitch and the rest of the characters simply come to life with the turn of every page. I was so engrossed in their story and what would happen next that I couldn’t put the book down. If you’re looking for a heartfelt, sexy story that has everything thing from a sexy dominant alpha male to a heroine who was born to be a submissive, and you enjoy being a voyeur while partaking in some fun with a few sex toys, then Sudden Devotion is definitely the book to read. Not only would I recommend Sudden Devotion to my friends, but I’d also buy them a copy. Bravo Ms. Morgan!" -- AJ, Dark Diva Reviews

4 CHERRIES: "This was an interesting story about finding true love and many of the trials and tribulations that go with it. The love and the bond of trust that develops between Sara and Mitch was a good read. These two characters endear themselves to the reader as much as Claudia gets you to hate her. The more you read this story the more you begin to wonder just why the others let Claudia manipulate them as well as she does. Nicole Morgan pulls the reader into the world of Sara and Mitch, easily keeping you there until the end. This book is a well-written and fast-paced page-turner that should not be missed." -- Mistletoe, Whipped Cream Reviews

Sara looked at Mitch over the rim of her glass after taking a sip. Setting it down, she spoke candidly, “Mitch, I’m sorry for the way I acted just a little while ago. I wish I wasn’t so unsure of myself. You told me I should be truthful with you, so I will.”

She took a breath as she folded her fingers together on the table. “The truth is, I really like you. And I really don’t want to do something to scare you off. That’s why I didn’t want you to think you had to do all of this,” she said, motioning with her hands at the ambiance of the restaurant. “But,” she said before he could protest, “I think I could get used to you spoiling me a little.”

“Well, I am very glad to hear that. I think I will enjoy spoiling you, as well. Now, what are the odds I can get you to take off those panties?”

Mitch and Sara waited quietly as the waiter set their salad plates down in front of them. When the red-faced waiter left them, they both burst out into laughter.

Trying to regain her composure, Sara reached for her wine glass and eyed him with disbelief. “You are going to have to do something about your predilection toward me having a naked bottom.”

With complete disobedience in his eyes and a hint of mockery in his tone, he said, “You know, I think you’re right. When we leave here, let’s go pick up some lighter fluid and have ourselves a little panty barbeque on your patio.”

She laughed for a moment before she asked, “How did you know I had a barbeque?”

Shit! There was no way he could tell her yet. She would retreat and run. Trying to play it casual, he said, “I just figured. Does that mean we get to do it?” He waggled his brows at her.

“Hardly. But if you keep making me laugh like this, I might have to reward you later. I swear, I haven’t had this much fun in such a long time.”

They ate their salads over small talk. Sharing a few laughs over some of the people at the office., causing them both to be equally surprised to find that when it came to their co-workers, their opinions were identical. Amazingly, they had a lot in common.

Mitch wasn’t surprised at how compatible they seemed. When he watched her in her window just a couple of nights ago, he knew there was something about her. Something other than the fact that she looked absolutely magnificent as she touched herself in the moonlight.

The waiter took their salad plates away, and Mitch took a swig of wine before refilling both of their glasses. “Feel like playing a game?”

She smirked. “I am not going to take off my panties, and that is final. Wait until we get home.”

He wanted to laugh at her comment. But something about the way she said ‘until we get home’ caused a small flutter in his stomach. Could he actually really be falling for her? They haven’t even been dating for a week yet. He tried to ignore the sensation. “You’ve heard of word association games, right?”

Sipping her wine, she nodded.

“Well, it can be kind of interesting sometimes. Do you want to try?”

“Good. I’ll start. But remember, you have to say the first word that comes into your mind. So, I’ll start with, ah,” Mitch looked around the room for inspiration and saw it, “Leprechaun.”

Sara glanced around the restaurant until she saw a sweet little man with red hair. The only thing missing on him was a green suit, she laughed. “Okay, St. Patrick.”

He shrugged. “Hey, you got away with St. Patrick. That’s two words.”

She eyed him, as though thinking of what to say next. “Land.”

“Flying.” She smiled while sipping her wine.

Obviously not willing to back down, Sara responded quickly,  “Euphoria.”

“You.” He whispered the word with a gleam in his eye.

“Hard and fast! I want it hard and fast.” Her hips were rocking against his hand.

“Okay, I can do that, baby.” His voice still soothed her into submission. “What about number three?” He swiped his tongue down her slick entrance, moaning when he tasted her. “What should I do after I come in your sweet pussy?”

He chuckled. “Is my tongue distracting you, honey? I’ll stop then.”

“No! No, don’t stop.” She whimpered and bit on her bottom lip.

“Then you better tell me why. Why can’t I come in your sweet little pussy?”

“Because, damn it! I want to taste you after you’ve been inside me.”

Sara shouted at him, her frustration bringing out the animal in her.

He watched her as she bit out the words and continued to writhe against his tongue. She was completely lost in her arousal. Could he tell that she was no longer in charge of her body? Her desire had taken over. “Oh, baby. Do you want to taste yourself on me?”

“Yes, all right. Yes.” Sara was beyond any sense of reason or self-control. She only knew that she had fantasized about what it would be like. And now that he was here, she wasn’t about to lose her chance to get what she wanted.

Coaxing her along he asked her to finish, “Tell me, what would you do after you sucked all that sweet pussy juice off of my cock?”

Her whole body was on fire. She was going to come, and he’d barely even touched her, just occasional licks and kisses. No real friction or pressure. His touches were more teases than strokes. “Mitch, I want you to come in my mouth again.”

Mitch closed his eyes for a moment. Trying to hang on to the control that she had almost just broken. “Oh yeah? You’re such a sweet girl, honey. You liked that earlier today, didn’t you?” He looked up at her and watched her face as she fought against the orgasm that was building. “Then I’ll give you exactly that, Sara. But only if you do the same for me. You tasted me, now I want to taste you. I want to taste your sweet climax when my face is buried in between your thighs. Come on, baby. I want you to come for me.” Mitch dove in as he attacked her with his mouth and his tongue, devouring ever succulent nibble of her.

Darting his tongue inside her entrance, he moaned in delight at the sweet taste of her. The meal he had planned to make of her had barely begun, and he was about ready to lose himself in the ecstasy of it when she came. He hadn’t expected it to happen so soon. She screamed out his name and wrapped her legs around his head, bringing him closer to her.

Mitch had to laugh. She was just a flowing fountain of untapped desire. Even though she was shy, she changed who she was when she got truly hot and bothered. Then she completely let go. She had so many naughty sides to her, but she didn’t know what to do with any of them. He was thinking this as he drank up the last of her and knew that he was going to have quite a lot of fun with her.

Mitch looked up and watched her. His good girl hadn’t moved from the position he had put her in, no matter how much she squirmed her body. That was very good. She was going to be a very good student, indeed. He stood up while her eyes were still closed and stripped down.

“Stand up, Sara.” He waited until she opened her eyes. Then he held out his hand and helped her up before swinging her around. He placed her hands on the back of the chair and whispered in her ear, “Hold on, honey.”

He heard her moan at his half threat, half promise. The flush glow on her face told him that she was feeling every wave and jolt shoot through her body as he slammed into her. Sara was much different than any other woman he’d bee n with before.

Sara rocked into him and met him thrust for thrust when he felt her third orgasm of the day approaching. He saw she was struggling to fight it.

“No baby, don’t you dare stop yourself. Come for me.”

He watched her in awe as she threw her head back and screamed his name once again, all while her body convulsed in pleasure.

Mitch didn’t move. He stayed buried inside her as he waited for her body to come down. He watched her ass wiggle as she trembled. And wondered just how long he would have to wait until he could take her in that tight, little hole.

“Feel good, honey?” He waited, and she moaned her reply. “Good.” He fisted her hair in his hands and yanked her head back. “Now sit on the chair like a good little girl, and suck all of your hot juice off of my cock.” 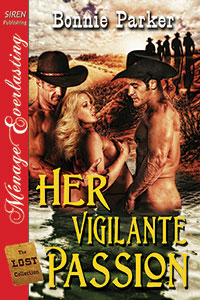