Young, beautiful, and hungry, Esme, Maire, and Niki want what every woman wants: love, work, safe shelter, the bills paid off, a diamond-studded Rolex and a two-bedroom condo with an ocean view. Working as sugar babies seems to be the only way to make this happen. But the sugar life is more dangerous than they thought. 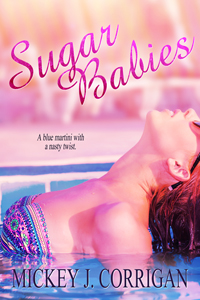 A few minutes before midnight, Esme stepped out onto the high-rise balcony and made a phone call. She felt lush, swollen, and she smelled of bed.

“The eagle has landed,” she whispered.

Jake’s cell was off, an annoying new habit he’d picked up. Which probably indicated he was in bed with some floozy from the bar. Otherwise he’d answer her call, no matter what time it was.

The wind off the ocean was cool on her bare skin. She could always call the bar directly, ask them to page him. She looked down at the black sea, the sand a luscious frosting, creamy white in the moonlight. Jake would kill her if she embarrassed him like that. She’d have to enjoy the glorious moment alone.

She’d made it! Months of nothing but strike outs and then, suddenly, a triple! Maybe even a home run! One minute she was leaning against a plastic column feeling hopeless. The next, she had a sugar job, she’d scored a sugar daddy, and she’d been ushered into the sugar life. Yes!

Now here she was, standing outside under a starry sky, stark naked, twenty floors above the ocean. She had come so far, so fast. After a hair-raising drive in his white Porsche convertible, a hot fast ride in which he barely looked at the road, he was so all over her. After a two minute elevator ride in which she’d been shoved against the back wall and stripped of most of her clothing. After that, she’d barely made it into Jay’s bedroom before she was freshly fucked and a brand new employee of one of the richest men on Coconut Island.

She laughed to herself. Good ol’ Esme Grant from the sticks, high school flunkout, class slut, voted most likely to never make anything of her life. Yet here she was, buck naked on the cold marble patio of a multimillion dollar luxury apartment. Buck naked, two thousand dollars richer, and able to stare down with impunity at those who struggled below. She had empathy, sure, but no pity. After all, her kind of newfound luck could happen to anyone. Didn’t she know firsthand exactly what it felt like to almost break your neck looking up?

Esme laughed out loud. Here she was, in the heart of Coconut Island, on millionaires’ row. In fact, she was standing on the terrace of one of the fancy condo buildings she’d lusted after on so many failed nights, depressing nights she’d found herself staring out a dirty bus window. Now here she was, deep breathing the sea air on the ultra-private, ultra-expensive beach side of a luxury condo building! She’d done even better than she’d hoped or imagined.