Music journalist and artist Shivaun Corbin is on assignment at Sugar Magnolia, the Mississippi home of classic rocker Daniel Madux. She has been charged with creating a retro cover for Daniel’s latest album, a comeback CD that incorporates a more modern sound with his 70s rock. When she enters the household on this sprawling plantation, she encounters an odd assortment of characters with secrets of their own while she works hard to avoid being another of Daniel Madux’s conquests. Young instrumental protégé Connor is determined to protect Shivaun from Daniel’s pursuit. Shivaun is distracted by Connor’s attentions and those of one of the female backup singers as more secrets are revealed and the past comes rushing into the present. Sugar Magnolia offers an inside look at the music industry and one woman’s place in it. 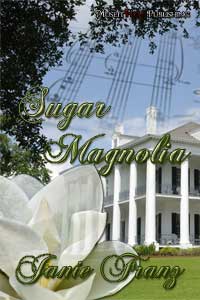 Shivaun caught her breath when she saw the massive, four-posted bed tucked behind the door, draped in a white voile canopy with white, bed linens. A pair of bedside tables, also painted white, flanked the bed. There was no closet, but double French doors led out onto an iron-railed balcony.

Part of Shivaun rejected the fussy, feminine frills that were a part of the clichéd Southern charm tourists came to expect of the region. Still, it was a lovely room with its beige wallpaper with clusters of tiny red roses.

Shivaun set her camera and purse on the bed and propped her laptop case on the floor against the night table closest to the door. She moved around the large bed to fling open the French doors and stepped out onto the balcony. Oaks and willows along a muddy river framed a well-mowed lawn, stretching all around her. The garden shrubbery that dotted its surface needed pruning, and the blue hydrangeas, surrounding two concrete benches by the river, needed weeding. In the middle of the lawn, a nude sculpture of a young woman, with well-developed breasts, spouted water into an algae covered pool.

“That’s Daniel Madux’s virgin,” Connor said near her. “Probably the only one left.”

Shivaun jerked her head to look at him as he lounged against the rail beside her, looking over her head at the garden. “The sculpture or virgins?”

Connor shrugged. “Nothing remains pure around Daniel Madux,” he muttered, still staring out at the sculpture.

Shivaun raised an eyebrow. Seeing he wasn’t going to explain, she returned to her bedroom. “It’s very nice,” she told Madge. “It’s rather like the years passed over this place, like it could still be 1865.”

“It’s a great place to get away from everything,” Madge said. “That’s why Daniel likes it so much.”

“Later, after you get settled. He’s out wandering the grounds, trying to collect his head. He partied pretty hard last night.”

She should have been prepared for that. She had been warned. She wasn’t sure how long they would let her be a voyeur, though. Her hard-drinking friends at the magazine didn’t like her sitting out their binges. Trying to be casual, she pulled out a stick of gum from her pocket, unwrapped it, and asked, “Drugs?”

“Beer and pot are all Daniel allows,” Conner explained as Shivaun rolled the gum into a circle and popped it in her mouth. “Occasionally, we get some local moonshine, but that stuff’s hard to come by. Daniel says if we use anything else, we can’t create…. He’s got a few more rules he’ll lay down when you meet him.”

Madge headed for the door. “We better let you get settled. The john’s across the hall. Sometimes, you have to bang on the door to get the room cleared…. Somebody’ll come for you when Daniel’s presentable.”

“Fine. I’m still living in another time zone and another climate. It’ll take me a bit to get used to the heat and the humidity here.”

As Connor followed Madge out the door, he called back, “Maybe we could have a toke together later.”

“Thanks, but no.” Shivaun smiled. “I quit smoking—anything—a long time ago. Gum’s my only vice now.”

“Only?” Connor asked. “You know I’ve got a coffee pot down there that’s more fun than you are.”

Shivaun gave him a big-sister look. “I came to work, not play.”

Connor swept his gaze over her body. “Yep. You’re a hybrid tea rose. It’s a damn shame…. Listen, if you’re hungry, come on down to the kitchen. I’m throwing something together for later anyway.”

She smiled at his invitation and thanked him as he left. Alone, Shivaun sat on the edge of the bed and began to worry. She got some really hard intel from an ex-roadie whose sole job had been to procure more than weed for Daniel Madux and his hangers-on. There had been coke and crystal meth and all sorts of prescription drugs. The guy did say Daniel cleaned up two or three years ago. But if Daniel were still using something, he could be one lost weekend away from spiraling down into that toilet again. Of course, getting detoxed would explain the year-long gap in his tour schedules she’d noticed.

Beer and pot. Who said pot anymore? These people didn’t behave like musicians she’d worked with before. They seemed to be players in a 70s sit-com, all caricatures of the music scene. The rest of them had to be as strange as these two. How could she put up with this crazy household for almost a week?

She was nervous about meeting Daniel Madux and wondered how she could do the sketch of him without becoming carried away with his myth. Yet, if she couldn’t capture the myth, what was the value of her sketches? Unless, she had photographs that belied the myth—now, that was a thought. The two together could be very interesting.
Shivaun decided her best course of action was to sketch only while the group practiced and to avoid private contact with Daniel as much as she could. She would observe the myth in action while she maintained a safe distance.