Zach Carson is a loyal friend. But is loyalty enough to keep best friends together when one of them sets fire to the rural barn they use as the local hangout?

Zach, Jeff Barsell and Arnie Wilson struggle to pick up the pieces when news spreads that a body was discovered in the burnt out shell of the neighbouring home. When the word murder is used by the local police, the stakes grow even higher. When the police start searching for their most likely suspect—none other than Jeff’s older brother, and nemesis, Marty Barsell—the boys decide to join forces and come up with a way to prove his innocence.

But just how innocent is Marty Barsell? When Marty admits to being at the scene of the crime, the three friends enlist the help of Zach’s annoying sister, Sherry, as well as the sympathetic town eccentric, Ms. Halverton. But can they keep it together long enough to save Marty, and themselves, from eminent catastrophe? Summer on Fire is the story of friendships, and the lines we are asked to cross in order to keep them. 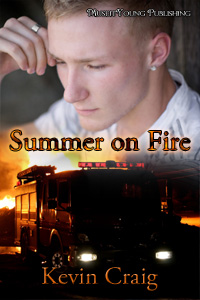 “If that’s not an underhanded compliment, I don’t know what is.”

“It’s all I got,” I said. I got up and headed for the door, knowing she would follow me.

“What’s Jeff up to now?” she asked as we made our way across the parking lot.

I grabbed her hand, stopping her in her tracks.

“This isn’t really everything, but someone was following Jeff and me earlier and we split up and ran through some backyards by his place and I lost him. So now I don’t know where he is.”

“What do you mean, following you? You mean, like—”

“I mean, like in a car. An unmarked police car moving slowly down the street behind us.”

“I wish I was. We took off and, well, he’s way faster than me. He was gone and I couldn’t keep up with him.”

“Let’s walk home,” she said, grabbing me and pointing me in the right direction. “There’s no way we can find them just wandering around.”

“Wait. No. I have to make one stop first. You can come with me.”

“I have to go to Arnie’s place, Sherry. I have to see him for a second.”

“You said that wasn’t everything. What else is there?”

“Damn, Zach. You guys aren’t helping him, are you? Look at me.” She grabbed my collar and shook. “You can’t screw around with him. You know the cops are looking for him. Do you want a record too? Because you know damn well he’s gonna have one as long as his arm before he’s twenty. Stick around him and you’ll have one to match.”

I shook myself free of her weak hold.

“I’m not an idiot, Sherry. We’re careful. He’s turning himself in. He was going to do it last night, but he chickened out.”

“Trust me, Zach. He has no intention of doing the right thing. Ever. I don’t know if you ever noticed, but the guy’s pretty much without a conscience.”

“Well,” I said. “I used to think so too. But he really convinced me last night. I thought for sure he was going to do it. He just needs one more push.”

“It may not even matter, anymore. Who knows? Jeff may have led them to him. Maybe they’re both in jail.”

“Did you want to find out one way or the other?”

“Gee, Sherlock. What a great idea. I wish I had thought of that. Maybe if I was psychic I’d be able to look into my crystal ball to find out.”

“It’s not a crystal ball you need, grasshopper. It’s a grey bun.”

I had an instant aha moment. “Of course. Ms. Halverton. Why didn’t I think of—”

“Because you’re stupid and you need the superior brain functioning skills of your big sister to help you out of tight places?”

“Oh. Wait here,” I announced. We were standing in front of Arnie’s house. “I’ll just be a few minutes.”

I ran up the stairs. “Thanks, Sherry.”

I rang the bell and listened as Mrs. Wilson made her way through the house and opened the door.

It was the first time I had ever seen her with anything but a manic look on her face. Her stern grimace said it all. She wasn’t insane at all. She was a mother in love with her son. And she was looking at the one person who had hurt her son the most. I wanted to slink away with my head bowed in shame, without saying another word. But I knew I owed Arnie more than that.

“I don’t know where else he would be, Zach. He’s in his room recovering from a broken leg. And maybe even a bit of a broken heart.”

I cleared my throat and looked down at my feet. Then I remembered Ms. Halverton’s, “Sorry, schmorry all you want to those feet of yours, and thought better of it. I looked her in the eye.

“I’m sorry, Mrs. Wilson,” I said as her usually happy eyes burned into mine. “I did Arnie wrong and I would like to apologize to him.”

“The wrong began long before you watched Jeffrey beat him, Zach. The wrong began with you boys smoking and it just went downhill from there.”
That time I did look at my feet, but only for a moment before stopping myself again. “So he told you everything?”