What if love really is better the second time around?

It's a rough Christmas for just-divorced Sunny Williamson and her six-year-old daughter, Jasmine. When your no-good husband leaves you for a pretty young dancer, it's hard not to feel old, fat, and frumpy. But then she meets a handsome widower, Ben Stillman, and his young son, Spencer. The two kids hit it off, dragging their parents into an unwitting friendship.

Sunny's never thought about dating a white man. The whole interracial thing seems risky, especially since Jasmine is still struggling with adjusting to her father's defection. What if the little girl gets attached to Ben and Spencer and things don't work out?

Ben has been struggling under the weight of grief since his wife's death a year ago. He suspects it's too soon to move on, but somehow he wants to make Christmas special for Spencer. Then he meets Sunny and everything changes. She chases away the darkness and makes him feel alive again. Can the two of them learn to trust the magic between them long enough to give love a second chance? 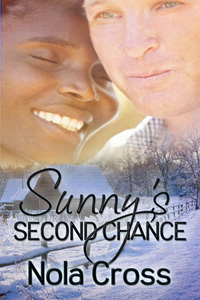 "Sunny's Second Chance is a sweet, empowering story of hope and family and I enjoyed every page." - Literary Nymphs Reviews

"I would recommend Sunny's Second Chance to anyone who enjoys great romances and stories about interracial couples." - Sizzling Hot Books

It had snowed lightly overnight, dusting the ground and rooftops like confectioner's sugar. There was just enough snow to be pretty and festive without causing issues with driving, or necessitating boots, and the skies had partially cleared, allowing bright white sunlight to peek through.

"Wait here, kiddos," he said as Jasmine clamored into the back seat.

He rounded the rear of the car just as Sunny came out of the front door of the house and turned to lock it behind her. She was dressed in jeans and a hooded parka, the hood laying back on her shoulders. Her black hair glistened in the sunlight, and a pair of dark glasses hid her eyes. Over one arm was the handle of a large picnic basket.

She smiled broadly. "I made sandwiches," she called as she came toward him.

"Great! Thank you!" He took the basket and held the passenger door open for her as she got in. As he went around to stow the basket behind the back seat, his heart began to pound. Something had changed, hadn't it? The other night it had been like pulling teeth to get her to agree to come today. But there she was making her own contribution to the festivities. That was a good sign, right?

He lifted the lid of the basket for a quick peek. Oh, man! These were no ordinary, slapped-together, Wonder Bread sandwiches. Made on long, crusty bakery rolls, they were closely wrapped in plastic, but he could make out several layers of meats and cheeses, lettuce and pickles too. Nestled next to the sandwiches was a big baggie full of chocolate chip cookies that looked homemade. And there was also a thick, blue thermos and four plastic cups. If the time and care she'd taken in preparing the lunch was any indication of her interest in their friendship, things were beginning to look very promising!

He broke into a happy whistled rendition of Let It Snow as he closed the trunk and headed around toward the driver's side.

The trip through Portland and across the Columbia River to the small town of Brush Prairie, Washington, took nearly an hour. On the way, they must have sung Jingle Bells at least twenty times. In between, they took turns trying to name all of Santa's reindeer and the gifts from The Twelve Days of Christmas song. Sunny was the only one who could name them all in order. Being a grade school teacher, she had a natural advantage at that type of game.

Several times during the singing she laughed out loud. Ben glanced her way, trying to gauge whether she was genuinely having a good time. He couldn't see her eyes behind the dark glasses, but her smile seemed real enough.

As they left the freeway behind and meandered down a series of curving country roads, snowflakes began to drift down here and there. The kids pressed their noses to the windows, watching the little flurries.

"Do you think we'll get stuck out here, Mama?" Jasmine asked, a note of anxiety in her voice.

Sunny pointed toward the south. "See the sun peeking through over there? These clouds aren't thick enough to make very much snow at all. We have nothing to worry about."

"That's good. Who would feed Mr. Trix if we got stuck in the snow?"

Sunny laughed softly. "Mr. Trix would be fine on his own for a day or two."

Ben felt a prick of anxiety. He was allergic to some cats. Hopefully, Sunny's Mr. Trix was kept outdoors. As he realized that he'd been envisioning himself as a guest in her home, he chuckled to himself. To be perfectly honest, he'd been imagining her inviting him into her bed. Talk about jumping the gun! 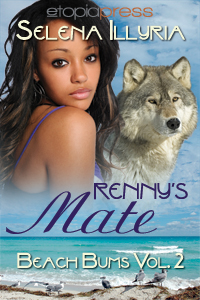 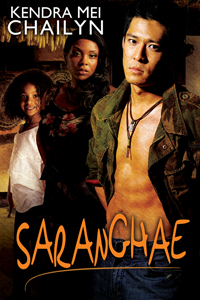 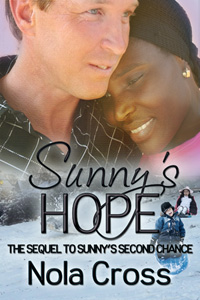