At the turn of the century, society is undergoing massive change and Creighton Jacqueline Brooks is prepared to make changes of her own. After receiving inheriting a share in a London detective agency, Jacqueline jumps at the chance to forgo marriage and delve into an exciting career.

British solicitor and partner, Stephen Haversham, is none too keen on playing babysitter to the frumpy American. But after sharing close quarters with Jacqueline, and working with her on a high profile murder case, Stephen can’t deny his attraction for his intelligent and crafty partner.

After helping to get handsome Lord Derby acquitted of murder, Jacqueline must decide between her heart and her head – a choice for love between her poor partner or the wealthy aristocrat. Just when Jacqueline thinks the murder of Lord Derby’s dowager mother has been solved, however, an unexpected turn of events teaches her that not everything, nor everyone, is as it seems. 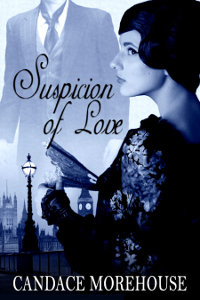 Jacqueline pursed her lips. “You smell like an ale house!”

“Brilliant deduction, my dear Mish Creighton! Pe’hapsh you should try your ’and as a detective.” Stephen leaned forward intently, giving Jacqueline a thorough once-over with his glazed eyes. “Oh, that’s right! That ish exactly what you are trying to do, ish it not?

He could tell Jacqueline was quickly losing her patience. “Should I cosh you about the head now, or will you leave off your drabble for a moment to listen to me?”

Stephen made a great show of straightening in his seat and folding his hands before him on the desk in the manner of a schoolboy. “Right-o, Headmistress Brooks. I fear shall I not comply you will rap me shmartly about the knuckles.”

It wasn’t the first time Stephen had referred to her thusly. It was usually when he was upbraided by Jacqueline regarding his pig-headed ways that he referenced her resemblance to that of a former grammar school teacher. The association was not a complimentary one. “You would be wise to take heed of what I am trying to impart to you, Stephen.”

“’Twould be much easier if there weren’t two of you and I wasn’t sho pissed.”

Jacqueline groaned and removed her spectacles, laying them on the desk. She brought her hands to her temples and pressed.

“Bob’sh your uncle, that’s much better,” Stephen said, attempting to focus his gaze on her face. “Now you don’t look ash much like a headmistress. Rather jusht a mishtress.”

Jacqueline’s eyes widened, “How dare you?”

Stephen acted surprised, as much as a besotted man could. “I ’aven’t dared anything yet!”

He paused a moment, deep in thought. “Not that I ’aven’t thought of it, right enough. I’ve oft wondered what liesh beneath those ugly garments you inshist on wearing.”

Jacqueline merely stood and reached over the desk to slap Stephen smartly across the cheek, then stepped back with eyes wide.

Stephen stood a bit shakily. He was angry now. This time his partner had gone too far! He grasped Jacqueline by the front of her dress and brought her up close to his face, leaning across the paper-strewn surface of the desk.

“Madam, that is an action you will regret.”

Stephen’s initial inclination had been to shake some sense into her. He’d almost forgotten she was a female and there was no justification for hitting a woman, no matter how maddening the provocation. But now that he held her thusly, he could see straight into her big pansy eyes, wide with apprehension, and feel the rapid beat of her pulse beneath his knuckles. Her lips parted in an “O” of surprise, and Stephen instantly forgot his ire. Instead of lashing out with reciprocal violence, he planted his mouth over hers.