When Galactic P.I. Majestic Kane made a dumb rookie mistake a client paid for it with her life. Filled with anger and guilt, he knows he can’t change what happened but is determined to hold the killers responsible. Kane made a promise, and someone is going to pay. 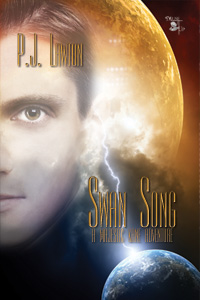 Later in the evening as he was leaving his local eatery, two men were lounging outside, trying to blend into the scenery, but standing out like the proverbial sore thumbs. Kane sniggered inwardly. Maybe they were there just to watch me, he thought, but I doubt it. Just before he reached his parked scooter, they walked up to him.

At about an arm’s length away, the bigger of the two spoke. “Okay friend, let’s go, the Boss wants to talk to you,” he said, showing Kane the little PLW laser in his waistband. Kane guessed it was supposed to scare him into submission, or something.

Man, this is crap is really getting old. How many times do I have to go through this drill? It’s like an old recurring nightmare. Why do these clowns always think I can be taken off the street like some two-bit hustler?

Shaking his head in mock regret, he said, “Sorry boys, I’m afraid I’ve got other plans for this evening.” Kane kept his eyes on the smaller of the two; he appeared the more dangerous one. Kane couldn’t believe Flash was using human hard-cases for lackeys instead of droids. With the droid ban lifted, Kane was pretty sure there were plenty of them around. Droids could be a lot tougher and meaner than humans.

Trying a surprise move, the bigger man grunted something unintelligible and reached out for him. Well you pig, you asked for it. Kane used his good left leg to kick the guy in the shin, hard. He was wearing his steel-tipped work shoes with the stiff leather soles. He heard a muffled sound and fully believed he’d cracked the lout’s leg, because the guy bellowed in pain and starting hopping crazily in a circle.

Simultaneously with the kick to the first guy, Kane took a straight right-hand jab to the nose of the second guy. He must have caught the little one well, because blood gushed out like a fountain as the small man literally flew backward against the side of the building. With his eyes watering and his nose pouring out blood, the guy wasn’t much of a threat anymore. He wasn’t sure about the big guy.

The first man looked like a circus act, hopping around still trying to draw the laser pistol from his belt. There was only one thing to do, and Kane did it. He calmly walked over and kicked the big man in the other shin. Down went the thug, screaming in pain as his weapon went flying.

Kane moved back to the little guy who was still trying to clear his eyes and pinching his nose-bridge to stop the nosebleed. Grabbing him by the shirtfront, Kane gave him a good left hook just below the ear. The small man crumpled, down and out just like Kane knew he would. He didn’t really need to do that, but heck, it just felt good.

Walking over to the big man Kane said, “Tell your boss I’m not finished with him, not by half, and tell him also, well, if you two are the best he’s got….” Kane didn’t bother finishing the sentence; he figured he’d made his point. Then he noticed the big guy surreptitiously reaching for his fallen pistol. Just for good measure, Kane stepped over and kicked him in the head! Goodnight boys. Sweet dreams.