Valentines is for romance and lovers—not for Sharon and Chet. From boyfriends who steal her credit cards to a job she loathes, her life pretty much sucks. And since his wife died two years earlier, he’s lived the life of a monk.

But when he finds her asleep on his couch, gorgeously seductive in a maid’s uniform, his desires aren’t so sweet. A shared piece of candy turns into a night of passion, until morning’s light intrudes. Now they must decide if they have the courage to look beyond their past hurts and grasp the love they so desperately crave. 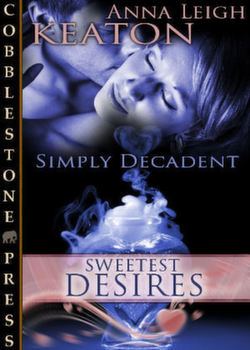 He frowned at her. What he wanted was for her to leave. Though, she looked awfully...lost. He figured if he called security, she’d lose her job. He moved away from the sofa and went into his bedroom, turning on the light as he went. The bed was made, a small, white box sitting between the pillows. Then he checked the bathroom. Everything was in its place and clean. She was a sufficient enough maid. Did she deserve to lose her job over this?

When he came back into the sitting room, half expecting her to have taken her cart and run while he was in the bedroom, she still sat on the sofa. Only now she sat up straight, her expression one of resignation, not fear, and her hands were primly folded in her lap.

“Have you ever fallen asleep on the job before?”

Her smooth brow pulled together for a brief moment before she shook her head. “No, sir. This is the first time.”

She was definitely pretty. Her skin was smooth and flawless, pale and creamy. He’d place her age in the mid twenties. She did have some hefty purple smudges beneath her eyes, though. Those big, baby blues glittered in the low lamplight, and her lips were full and pink. She wore no makeup that he could tell.

“Why...” He noticed her shoes on the floor at the end of the couch. The woman really made herself at home, hadn’t she? He raised an eyebrow at her. “You couldn’t find an empty room to nap in?”

The woman—Sharon, he read on her nametag again—stood up and reached for her shoes. As she did so, her A-line, drab gray uniform skirt pulled tight across her perfectly rounded ass.

Chet rocked back on his heels and shoved his hands back in his pockets. It’d been a long time since he thought about a woman’s ass. Since the telltale tingling of arousal pulsed through his veins.

When the pretty blonde stood up and faced him, shoes now in place on her feet, she held out her hands as if imploring him not to condemn her. “I’m very sorry, Mr. Sterling,” she said once again. “It was a mistake.” She dropped her hands and shook her head. “I’ll go now. My name’s Sharon Brock if you want to report me.” She picked up the heart-shaped box with the one chocolate left in it. When she moved toward the door, he reached out and grabbed the candy from the box.

He didn’t know what possessed him to do it, but he bit into it while he held her gaze, daring her to tell him not to eat it. She was in his room after all, and he had no intention of reporting her. He figured she’d probably have enough to account for by showing up with a maid’s cart after six in the evening. Hell, she was the most excitement he’d had in ages.

Sweet, cherry-flavored syrup squirted into his mouth as he bit through the almost bitter, dark chocolate. He couldn’t even remember when he’d last had chocolate candy, and this one was... He moaned and closed his eyes as he put the rest of it in his mouth and slowly chewed. Scrumptious. Decadent.

When he opened his eyes, Sharon stared at him, her lips slightly parted in what looked like surprise. “Good chocolate,” he offered then licked his lips.

Sharon couldn’t take her eyes off the man. He was the most beautiful thing she’d ever seen, and watching him eat her last piece of candy—God, he was...sensual. He was way older than anyone she’d ever found herself attracted to—probably in his mid to late forties—but everything about him was...beautiful.

He was over six feet tall, his black hair sprinkled with white at the temples, and his rugged face gave off an air of sophistication she found intriguing. But most of all, he didn’t look at her as if she were nothing but misbehaving, hired help. He met her gaze straight on with eyes the same color as the dark chocolate he’d just eaten.

She shook her head and tore her gaze from him. No damn men! What’s wrong with you, you dummy? Just stop it. “If you’ll excuse me,” she said as she headed across the room. “I have to get this...” She walked around the cart to the door, grabbing the handle as she went. “...downstairs before they miss it.”

“Wait,” Mr. Sterling said as he came toward her.

Damn. He was going to report her. She thought maybe he wouldn’t, especially after he took her last piece of candy and had given her that mischievous look, but it was too good to be true. She was screwed. Jobless and screwed, and definitely not in a good way. What would she do now? She could go back to the SleepyTime Motel, she supposed, but ugh. She wasn’t sure she could work with Peter since their breakup.

“What are you doing tonight?”

She stopped halfway out the door, the cart separating them. “What?” She must have heard him wrong.

“Um...” He shoved his hands in the pockets of his slacks—his suit probably cost more than she made in a month. “Is there a Mr. Brock?”

Her eyebrows shot up. “Are you asking me out?” On Valentine’s Day? Was he nuts? Was he married? “It’s against hotel policy for us to socialize. I could lose my job...”

Mr. Sterling shrugged. “I guess that’s kind of up to me, now isn’t it? Have dinner with me, and we can have a little secret between us.”

The words should have seemed creepy, but the endearing smile on his face, accompanied by those gorgeous, bedroom eyes, made her insides melt. She leaned over the cart. “You won’t tell anyone I fell asleep in here if I have dinner with you?”

He shook his head. “Just dinner. As long as you’re free, that is. I don’t do...If you’re attached or already have plans...”

Sharon shook her head, the tight knot in her gut loosening. She wouldn’t lose her job, and she wouldn’t be alone on February fourteenth. “I’d love to have dinner with you.” Did that sound needy? She cringed. “I mean. Let me turn in this cart and change my clothes, and then I’ll—You’re not married, are you?” Better be safe than sorry. With her penchant for losers, the last thing she needed was a married guy—even for a measly dinner. That was one place she’d never gone and didn’t want to start now.

His smile slipped, and sadness clouded his eyes. He stepped back from the other side of the cart. “I’m single. Widower, actually. I just thought...” He turned away and ran a hand through his hair, mussing the top. “I’m sorry. That was out of line. I’m not going to turn you in for sleeping in here. You should go.”

Sharon’s heart tipped up on its side. The poor man. He was all alone. He just wanted to have dinner with someone so he wasn’t by himself. How could she tell him no? “Um. It’ll take me a bit to change and stuff—to explain why I’m turning this cart in so late. If you want to go somewhere for coffee or something, I’ll be on the corner of Second and Louisiana in about a half hour.”

He turned around and looked at her, but she saw that he’d already made up his mind. He wasn’t going anywhere with her.

“If not, thank you, Mr. Sterling, for not turning me in.” She backed the cart the rest of the way through the door and watched it close on silent hinges before it clicked shut.