It's 1975--do you know what your sexual preference is?

Kirk Bauer, a leading man compared to John Wayne with Robert Redford's looks, attends a Hollywood "swingers" party with his girlfriend. There, they meet up with Kirk's buddy Troy Camden and his girlfriend, Holly Lane. Kirk's lust, however, takes an unexpected turn when he watches Holly perform sexual acts on Troy. Does he really want a man to perform similar acts on him? And more importantly, does he really want to do that to his friend?

Troy, an up-and-coming leading man, has almost as much experience with men as with women, but he hasn't allowed himself to fall for any man since he was twenty--that is, not until he and Kirk get down-and-dirty in one of the pool cabanas at the party. For Troy, sex with a guy has never felt so right. But can he keep his heart out of it?

Kirk struggles with his sexuality--and his feelings--almost as much as Troy tries to keep from falling for Kirk. One weekend at Kirk's ranch, however, the two finally admit their love for each other, only to have their affair outed three weeks later in the gossip rags.

With their careers in Hollywood possibly over, the two take bold action. But will it be enough to reclaim their lives and their hearts? 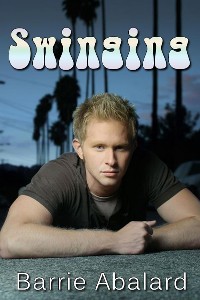 Grasping Troy’s head, Kirk banged his mouth, desperate to come. Abruptly, the coolness of the evening air tickled his cock.

“Suck my—,” he whispered harshly, but the younger man had his tongue in his mouth before Kirk could complete the order. He could taste himself in Troy’s mouth, and instead of freaking him out, it turned him on.

Troy grasped his buttcheeks, his mouth nipping each of Kirk’s nipples in turn. He was going to explode unless—

After biting his earlobe, Troy said, “Bend over the chaise.”

All of Kirk stiffened, and his cock grew harder still. “I don’t want to be fucked up—”

“Trust me, you’re gonna love it,” the younger man purred. When his hand slid down to pump his cock, Kirk relented, bending over the back of the chaise.

Troy’s tongue touched him there—there—while pulling his dick in a steady rhythm. Then, the tongue invaded him. Kirk thought he would pass out. He’d taken plenty of women up the ass, but never had anyone taken him that way. His balls tightened as he shivered with pleasure. Troy was now licking his balls while finger-fucking him. Never had he imagined the sensations, or that sex with another man could feel as good as sex with a woman. No, scratch that—better.

Then, pressure against his anus. Troy bent over his back, murmuring, “Kirk, man, don’t freeze up on me. I’m going to blow your fuckin’ mind, buddy, so hang on.”

Troy’s hand spread lubricant on his cock and his anus, inside and out. Kirk didn’t know where the younger man had found some, but couldn’t say he cared. Troy began prying his back door open, the pressure and pain shocking him even while his dick turned to stone. Taking Troy’s cock hurt—he couldn’t help moaning his pain—but something hard back there, fucking him relentlessly, excited him in a fresh way.

Troy’s hot breath on his neck disappeared. Kirk felt the younger man hold his hips still while he pounded in and out, in and out. Now I know how Natalie feels! flitted through his thoughts, and he wondered that he, Kirk Bauer, wide-shouldered hero that made women swoon, should find satisfaction in another man reaming his ass.

“Oh, Christ,” he moaned, aching to come, but unable to, and wondering what he should do. “Jesus, I gotta, please.”

All he could think was, I want to give the same pleasure back to Troy.