Tail of the Dragon

Danielle is ready to challenge the twisting road known as Tail of the Dragon on her Ducati sport bike. Forced to stop because of a violent unpredicted storm, she parks near the dam where the eleven-mile stretch of road begins just as a greater challenge bursts from the weird, purple lightning storm and passes out at her feet. Terrified but entranced by the dragon turned to a handsome, incredibly built, and very naked man, she feels compelled to help him. A changeling banished from his own time, Garnith bursts into the twenty-first century. When he hits a power line, he changes to human form and passes out. He awakens to see a beautiful woman in body hugging leather. Where and when is this strange place the wizard’s spell has cast him? Destiny has played her hand and soon Danielle and Garnith learn the evil wizard has found them and intends to exact revenge and steal a dragon’s power. Llud will use any means to gain his ends unless timeless love and a dose of good magic can stop him. 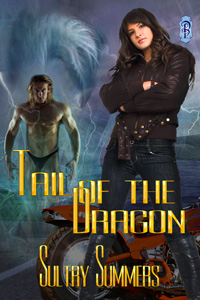 Tail of the Dragon

Garnith saw fright and distrust building in Danielle’s entrancing blue eyes. He’d seen that look before in the stares of those who witnessed him change, and he hated it, especially in the face of a beautiful maid. He’d never harm her, though she had seen him in his dragon form, and it could be a problem.

His gaze narrowed, contemplating her and the strange clothing she wore. She dressed in leather, like a warrior, but he saw no sword or other weapon. Her garments hugged every part of her body revealing far too much of the beautiful woman beneath, if she showed it, he would appreciate it. A slight smile tugged at the corners of his mouth. Tall compared to the females in the time he came from, still she wouldn’t meet him on eye level. Her strength impressed him. Unassisted, she’d pulled his sword from the pack while it was tangled and caught with a heavy piece of his armor. His gaze travel over her and settled on her boots, admiring the craftsmanship.

When she swung her leg over the seat of the thing she rode, he realized she was attempting to escape him. In a quick movement, he lunged for her instead of his sword and succeeded in reaching her.

Garnith kept his voice even to calm the girl, but when Danielle stiffened in his arms, he knew she’d panicked. His huge arms wrapped around her petite waist and pulled her from her bike. Despite the surge of liquid heat the contact with her body sent rushing through his veins, he felt her terror, too. Using the heavy boots she wore to her best advantage, she fought like a wild creature kicking whatever body part her foot came in contact with. She’d slipped on her riding gloves before he grabbed her, and they were made from a material far sturdier than leather. Danielle balled her fists and used them as punishing weapons striking his jaw with a well-placed punch. He turned her loose, amazed at her strength and ability as a fighter.

She tried to gain her feet, but quickly, he again wrapped her in his grasp. This time she lay on her back with him atop her. Garnith watched Danielle draw a great breath to scream but covered her lips with his own to silence her, praying no one would happen by. He held her down until she quieted, subdued by the tussle and his embrace, then drew away to look at her face. 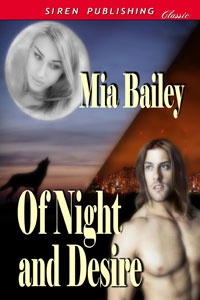