When Leta’s tiny home town of Aventine-upon-Thames was burned by savage marauders from the North, the last thing she expected was to find herself in the arms of a man who looked just like the men who burned her village. Ragnar Thyrsson, a mighty and noble Viking warrior, made a promise long ago to keep her safe. The last thing that he expected was to fall in love with his charge.

After leaving Leta in the care of his men, Ragnar returns to warn them of a danger from all their pasts and finds her in the arms of the four other Vikings. Tension between the men sweeps Leta up even further into their dangerous world even as her love grows, not just for Ragnar, but for Hrolfgar, Vorix, Finn and Tyr alike. Will she stay with Ragnar or run for the hills with the wild Hrolf? What of the other gang, no doubt terrible and vile? Find out, as Leta gets TAKEN BY THE VIKINGS!

A taste of the passion within:

Ragnar’s lips felt warm behind my ear and his tongue gave me a little charge when he touched me with it before sucking my earlobe inside his mouth. Vorix put his hand on top of mine and pressed it against himself. In the shadows, his eyes were barely visible, but I knew their pale green color so well that I was able to see it without seeing it. I watched him, watching me, for a long moment until another of Ragnar’s hungry, sucking kisses made me close my eyes as the pleasure of being with him – with both of them – caught up to me and spilled down my back. I felt that old warmth creep up between my thighs, trickling and slow, as a finger traced a line down my chest.

“Why is it...why is it that you’re not jealous?” I asked to either one of them who cared to answer. “You seemed so sure that you owned me, that I was yours way back when you dragged me out from my hiding place in the forest after my village burned? It seems like years ago but really it was only a handful of days.”

Ragnar raised his head and I smelled the oil in his hair that he used to keep it in place. He looked at me for a time. The rise and fall of Vorix’s chest came in time with my own breath. I was about to ask again when the Viking said, “I’ve seen the way your eyes wander. I don’t fault you for it. Nor do I fault him,” at which point he tilted his head to Vorix, “or any of the others. Some things you can keep inside, some things you can’t. I see no reason to fight nature.” 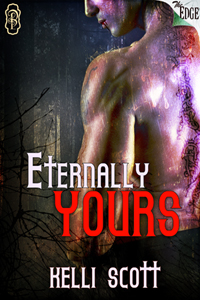 Eternally Yours
Kelli Scott
In Shelf
$1.99