Surviving a nearly fatal and crippling motorcycle accident, Bryce Payne is forced to reconsider her life goals. She’d been given the job opportunity of her dreams, but with a paralyzed hand and permanent limp, becoming the engineer she’d studied for had slipped from her grasp. Meeting Laveaux, a Guardian Were-Panther, and division leader at Guardian Enterprises, Bryce discovered she was a sonokinetic with the ability to control and create sound.

Gavin Moxley, a Were-Grizzly from Walker’s Run Were Sanctuary, is working to extend the peace between the warring factions and to create a union to protect humans from beings like himself.

When the vampires create a drug to try and control Bryce’s friend Lauren, the Keeper with the knowledge of all the Guardians and secrets locations of all the Sanctuaries in the world…

everyone is in danger.

Battling to protect and save one of their own comes with loss, love, and honor. Can Bryce overcome her fears and accept her new role as a leader when everything begins to fall apart?

When fate intervenes, everything gets tossed on the table in a war for balance. 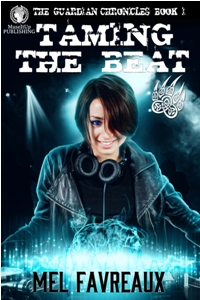 The elevator dinged. The doors slid open to show a small hallway. The space maybe two feet wide. In front of them were two solid steel doors with various security scanners in place.

The elevator closed behind them when he followed Bryce into the tiny hall. He could hear the hum as it moved on to its next destination.

“Mitch broke in here? How?” Gavin frowned as he watched Bryce go through the security ritual. The large doors whispered open.

“My best guess? With Lauren drugged it was almost too easy for him. She has all the security clearance.”

The doors whispered closed behind them. Gavin stared slack jawed around the room. Bryce said repeatedly, dee-jaying wasn’t all she did. He’d watched her fix Tommy’s motorcycle. She’d fixed his truck. Even made that fantastic little gun…but this shocked him more than anything else. Bryce was an absolute genius. In all his centuries of living, he learned two dozen languages, even spoke them fluently. For the first time, he stood in the presence of someone who’s intellect put him to shame.

She sat down at a computer and tapped a few command codes. He walked along the various stations to look at the complicated pieces of equipment, shaking his head. Bryce murmured to herself, she squinted at the screen, pushing her glasses back up her nose when they slid down.

Afraid to touch anything, he leaned closer to get a good look at a few things. He didn’t want to bother her since Bryce tracking down Mitch became every bit as important as Mason beating the location out of the vampire upstairs. Another day, another time, Bryce would have time to explain all of the complicated machinery to him. He couldn’t wait.

“What are you doing?” Bryce asked without turning around.

“Just looking. Not touching.” He clasped his hands behind his back.

She gave a small laugh, swiveling around in her chair. “You can touch…those over there.” She pointed to a table on the right side of the room. “Those won’t kill you.”

The edge of her mouth lifted in that incredible smile which drove him wild. “Are you okay?”

“Yeah.” Stepping away from the table he rubbed a hand down his cheek. The overnight stubble itched now, since shaving the excess shit off his face.

“Nothing is wrong. I—” He waved his hand around at the array of electronics and weapons. “You’re a woman of many layers, Bryce. Far more than I imagined. I feel like…I underestimated you. I’m sorry.”

“No apologies, we’re learning about one another.” She took her glasses off to rub her eyes. Dark circles rimmed them. She looked exhausted. “Why don’t you come over here? I’ll explain to you what I’m doing.”

They had been up for almost twenty-four hours. The last seven hours were filled with hardcore, adrenaline pumping action. Fatigue plagued Gavin. He knew Bryce must be running on fumes.

She pulled another chair over from the opposite work station, patting it for him to take a seat. Bryce pointed at one of the monitors, indicating a map. Another screen listed a bunch of numbers. He had no clue what they meant. Looking at it felt intimidating as hell.

An animated Bryce motioned between both screens. Her words seemed to be in a language he didn’t know. But seeing how excited she became about her work, warmed him. The more he learned about her the deeper he fell in love.

“I fucking found her!” Bryce shot up from her chair, sending it spinning backward across the room. When she pulled out her cell phone it rang.

She slid the key to the side, putting it on speaker. “I found her Pierre!” she crowed, relaying the information.

“We’ve got directions too. As well as how to sneak past their sentries from the prisoner. Are you up for this or do you want to stay with the children?”

Bryce looked torn for a moment before she lifted her chin. “I’m coming along. We’ll be up in a minute.”

She motioned Gavin toward the elevator, but stopped to grab another silver pistol from a table to stick in her waist band. Bryce punched in a key code, before laying her palm against a scanner. The doors whispered opened again.

“Are you sure—?” Gavin began. When she turned to him, he saw the pain in her expression.

“I may not be a Were or have limitless energy, but Lauren’s my friend. I’ll be damned if I’m going to sit back when I can do something to help save her.”

They stepped inside the cab of the elevator when it arrived. “You’re drained Bryce—”

Her spine stiffened. Her eyes appeared to shoot blue fire at him as she stabbed the button for the main floor. Before she could say anything in anger, he leaned in to capture her mouth. His eyes closed when her hands curled into his hair. Pinning her to the wall of the elevator, Gavin wished he had more time to explore her body.

The small sounds she made when his hand moved down over the curve of her right hip caused his heart to race. Her tongue slid against his. A low growl rumbled from his chest.

The elevator dinged just before the doors opened. It gave him enough time to extract himself from her before running a hand through his disheveled hair. He loved her touching him. It was sexy as hell when she dug her fingers into his scalp to direct him exactly where she wanted him most.

“I’m not tired anymore,” she whispered as the doors opened.

But she wasn’t the one walking out into a hallway full of armed men with a raging hard-on.