Fillin' Chet: When tattoo artist Scott texts his hot new boy-toy Chet and asks him to stop by the tattoo parlor after hours, Chet assumes it's just to hook up. But Scott's just as interested in filling in the tattoo on Chet's back as he is in filling Chet.

Matching Tats: Vic Braunson’s latest tattoo makes his lover, Matt diLorenzo, decide that he might want to get inked, too. But Matt's more than a little skittish when it comes to needles, and watching the tattoo artist at work is frightening. With the powers love gives him, however, Vic finds a way to help Matt overcome his fears ...

Mojo's Mojo: Tattoo artist Wray has it bad for his best friend Mojo, who is straight. When Mojo asks Wray to give him a a new tattoo in a very private place, will he be able to put aside his growing lust and perform professionally? Or does Mojo have an ulterior motive for dropping his pants?

The Tattooed Heart: Chris is a tattoo artist who coerces Lee to stop by after hours for free tattoos. Lee’s body is a shrine to Chris’s artwork. Every tattoo is a custom creation by Chris, whom Lee has loved for years. What will it take for Chris to realize the lover he’s looking for has been sitting in his tattoo chair all along? 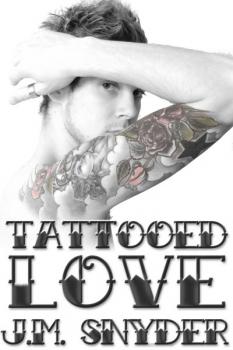 EXCERPT FROM "Inked in Blood"

He fiddled with the tattoo guns and glanced over at me, hands on my hips, eyes wide as I took it all in. Again his gaze dropped to my waist, and this time I didn’t have a shirt to pull down over my erection. With a nod at the chair, he told me, “Sit. I can re-do the ink on your arm if you want.”

I had to climb up into the chair, using foot rests a good twelve inches off the ground. As I settled in, I took a critical look at my college tattoo and grimaced. The once bright blue had faded to a sickly hue, the yellow almost the same tone as my skin. Once it had been my school’s logo, a golden lion’s head mascot circled with my college colors and the name of the school underneath. Now, if I squinted right, I could just make it out. But it was a fairly large design -- much bigger than the inch and a half Rist had shown me earlier -- and I wasn’t up for spending more on tonight’s adventure. “What’ll that cost?”

Rist dropped onto the stool and wheeled up beside my chair. He fiddled with a control somewhere out of sight and I dropped down a little, until we were eye-level. For a moment he set his elbow on the arm rest as his fingers played across the skin on my shoulder, feeling the outline of the tattoo. His touch was cool, sending a shiver down my spine that jolted my already stiff dick. I shifted in the chair uncomfortably, pulling at the front of my jeans just a little, hoping I played it off without him noticing. This close, how could he not?

Then his hand trailed down, fingertips like ice as they played over the hairs on my forearm. Goosebumps rose in his wake. I watched his movements, slow, deliberate, my gaze glued to his tattooed hand. At my wrist, he rubbed a tender spot just above my thumb and I turned my hand over, laying it open for his. When I looked up, I found him staring at my face with something akin to desire. My voice croaked when I tried to speak and I had to clear my throat to be heard over the music. “How much?”

“Tommy.” The way he said my name sounded like a purr, low and soft. I didn’t hear it so much as feel it echo through me, the same way I felt the beat of the music reverberate through my spine. “We’re both adults here. Alone. I’m sure we can come to some kind of mutual agreement.”

Still thinking money, I started, “I don’t want to spend too much ...”

His hand closed over mine, his palm cool against my heated fingers. With a gentle squeeze he released me and moved lower -- down my leg, along my thigh now, angling toward my crotch. A second before his fingers brushed over my sheathed cock, I realized what he was suggesting. He confirmed it when he said, “I was sort of thinking something else.”

For a long moment, I was too stunned to speak. My dick throbbed in his grip, eager to take him up on his offer. I’d been propositioned before -- hell, many times, and probably would be again before the week was out. But I hadn’t seen this one coming. Could I possibly get a free tattoo out of it?

Rist must have thought I was unsure because he tugged on my zipper a little, pressing it into my dick as he did so. “Come on, man,” he cajoled. “Either you’re hard for me or you’ve got some sort of medical condition that gives you elephant balls. This place is dead. So we can take care of each other and you get a tattoo for your trouble, what do you say?”

I laughed. “What do you get from it?”

I’d be a fool to turn him down.