Everyone is welcome at Kinky Kritters, even tarantulas out looking to celebrate with their elephant boyfriends.

Teasing the Tarantula
A.J. Marcus, Caitlin Ricci
In Shelf
$0.00
All Books In Cart
All Books In Bookshelf
Excerpt

Damien smiled as he felt the first brushes of Trey’s hairy legs on the back of his neck. He pretended not to notice as he slid back on the couch a little more so he could rest his head against the wall. He was reading a textbook, studying for his biology exam. He was running out of time—the test was being held in the morning—but he’d never say no to a bit of a distraction from his boyfriend.

Trey crept closer on his stilt-like legs as he made his way around the side of Damien’s neck. The fine hairs on his feet tickled. Damien couldn’t help his soft chuckle as Trey continued down his chest. Damien laid his hand flat, letting Trey crawl onto his palm. Then Damien lifted him up so he could see Trey’s face. His fangs wiggled as if he was trying to smile.

“Hey,” Damien said, smiling back at his boyfriend. “I thought you had to work tonight.”

Trey grew heavier in his hand, and Damien put him down on the couch beside him before he could fully shift. Holding a tarantula as big as his palm was one thing, but even an elephant like himself would have a hard time holding up his boyfriend if he didn’t shift right along with Trey.

Damien made more room for him on the couch and set his textbook aside. Studying could wait. He’d much rather focus on Trey as he turned from his hairy self into a slightly less hairy man with messy brown hair and a big smile. “You looked bored.” Trey stretched out on the couch, putting his feet in Damien’s lap where the textbook had been.

Damien laughed and ran his hand up Trey’s naked calf. “I was. I really hate this class. Too bad it’s required for my degree.”

“How about if we go out to Kinky Kritters tonight? It might distract you for a bit, and we haven’t been there in like two weeks. I’m getting edgy.”

Trey pouted and pulled away from him, getting on his knees on the couch beside him. He laid his hand high on Damien’s thigh. “And what if I want you to suspend me for a while? What then?” 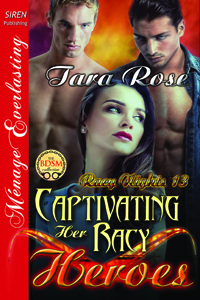