Noah works in tech support at a software firm. He gets a frantic call from Becky, the receptionist in Development, asking him to assist a new employee tackle his network problems. Jared is having a bad first day at work, and sounds unbearably cute over the phone, but Noah's been disappointed before.

To get away from the phones, he takes smoke breaks with his buddy Joel, Becky's boyfriend. When Noah sees a cute new employee, Joel's only too happy to help them hook up. Still, Noah doesn't want to write Jared out of the picture completely ...

Alternative Read:
"I found this a full blend with all the elements of envy, jealousy, longing and the humor, wit and keen insight I always associate with J.M. Snyder's work. Her works are always a treat to read."

Fallen Angel Reviews: 5 out of 5.
"Jared has the cutest voice, but does his appearance match his voice? Add the new guy into the picture, and you have a hilarious mixture of confusion that I enjoyed as it unfolded. I hope this isn’t the last time we see Noah and Jared; they are just too cute to end here."

Joyfully Reviewed: Recommended Read.
"The chemistry and sexual tension between Noah and Jared is more than enough ... With just twenty-six pages, J.M Snyder pens a story with exactly the right amount of romance, angst, and fun."

Night Owl Romance: 3 out of 5.
"I liked reading this book and several others by J.M. Snyder. The Working Man series is very enjoyable. My only wish is that the stories were longer, as I always get just a taste and I’m craving more."

The voice is familiar and it takes me a minute to place it. Jared, from documentation. He sounds frazzled. "I called earlier but they said you weren't in yet."

He called earlier? How cute is that? I grin as I tell him, "I get in at three. Are you having a better day today, Jared?"

"A little bit," he admits. "You remembered my name."

I laugh because he seems so happy about that. "What can I do for you this afternoon?" I say as Cecile walks by, glaring down at me. I can read her thoughts in that glare -- no personal calls. I want to say this isn't personal, this is one of the new guys they've hired and they've given him a piece of shit computer, so there, but fortunately she keeps walking. "Still having computer problems?"

I wait for him to elaborate but he doesn't, and for a few awkward moments we sit there listening to each other breathe. Just as I'm about to ask him if I can help him again, he sighs. "So where are you guys located actually?"

I glance at the clock -- ten till five. Behind me Joel's straightening his desk, getting ready to go on break, and I want to get out of the office myself, on the off-chance I'll see that guy from yesterday. "We're on the third floor," I say, a little distracted. I hope he didn't just call to chat. "Jared, is there something I can help you with?"

"Not really." When he sighs again, I feel bad for rushing him. He's lonely, I tell myself, new to the office and doesn't know anyone else, and the phones aren't ringing ... I have a few minutes, I can at least listen to him. "I just wanted to say hey."

Hey. The word echoes in my mind and suddenly the office around me freezes like an overworked computer.

I've heard that word before, in that voice, I know it. "Hey yourself," I whisper back.

"So you don't come in until three?" he asks.

Maybe I'm wrong. Maybe he isn't the same guy I saw yesterday, the Adonis in the turtleneck with the tight curls and the tight ass beneath those baggy jeans.

Filling the silence between us, Jared asks, "When do you get off?"

When I think of you. 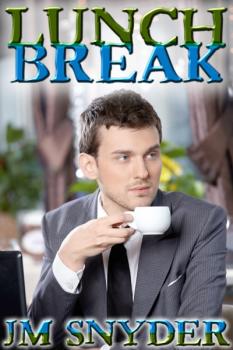