Teclis and Coil are security officers assigned to the Gracian spaceship the Gemorph, but for the last few months they've been living on a small island on Earth where they've been learning to become more human-like. Due to the decline of female births on their planet, their race is nearing extinction. But their possible salvation has come from the most unexpected of places. Several of their warriors have found their sparks—or mates—in the form of human females. The Gracians are hopeful that more sparks will be discovered. Teclis has already found his spark, but not one that he can procreate with being his spark is male. Teclis and Coil are unsure if there is a female spark out there for them.

Crimson has spent her entire marriage being abused by her husband. She plucks up the courage, and after much planning, she escapes. But to her dismay, her husband finds her and takes her aboard his boat. After another severe beating, Crimson wishes for nothing but death and throws herself overboard. She wakes to discover that she's been rescued by aliens. And if that weren't enough of a shock, apparently two of these gorgeous aliens want to claim her for themselves.

After what Crimson endured at the hands of a man who was supposed to have loved her, she has no desire to enter into a relationship with any man, let alone two. But Teclis and Coil are awfully hard to resist. And when her husband comes looking for her, she discovers just how serious they are about wanting to love and protect her for all time.

"Hi, Tec," Amelia said, her voice coming through the device in his ear. "Hover just informed Trian you are taking Crimson to your cabin."

"Yes, we have Crimson's approval to do so." Teclis frowned as he answered, sensing there may be a problem. Coil looked at him with question.

"Hey, why have we stopped, and who are you talking to?" Crimson asked.

Teclis gazed down at his mate in his arms and softened his features. "I'm speaking to Amelia. She's asking if we're taking you to our cabin."

"Oh. Okay. Then tell her yeah, I agree. I'm getting fed up of feeling like a dog in heat."

"Yeah, I remember that feeling. Only don't tell her it doesn't go away totally, because every time you see your mate she will want you bad. But she will learn." She chuckled again.

Teclis was pleased to know this piece of information. It might help Crimson decide to stay with him and Coil. He was also chuffed that Crimson couldn't hear what Amelia had said. That would be his secret for now.

"Anyway, I comm'd you because you and Coil are in the single-bed cabins, right?"

"Yes." Teclis was even more confused now. What did that have to do with him, Crimson, and Coil?

"Well, being it will be a very tight squeeze, Trian has had Koop upgrade your cabin to one on the officer's deck."

It was then Teclis realized that the three would not have fit into one of the single beds. He'd been too intent on getting to know Crimson in and out to even think about that.

After Amelia informed him which cabin they had been given, Teclis headed toward the elevator, telling both Crimson and Coil the news.

"We can have you between us, little spark." Teclis grinned down at Crimson.

"If it stops this incessant horniness, then I'll take it."

Stepping into the elevator, Teclis took a chance. He'd been staring at her plump lips on and off since leaving the medical bay, wondering what she would taste like. Lowering his head, he slanted his lips over hers and kissed her with every pain-filled urge he'd felt since the first time he'd seen her.

He felt immense relief when she tucked her arms around his neck and kissed him back. She opened her mouth, allowing his tongue entrance. He closed his eyes and moaned around her tongue when her taste flooded his mouth.

Frinx! He knew he had to stop or they weren't going to make it to the cabin.

Coil cleared his throat, reminding them they were in an elevator.

"Oh boy! I am definitely in a world of shit!" Crimson sighed, staring into his eyes.

Teclis frowned. "I think by the tone of your voice that is a good thing, but anyone in a world of excrement isn't a good thing."

Teclis glanced at Coil and saw the same confusion he felt.

"What I meant was…if you keep kissing me like that, it will be hard to say goodbye."

Teclis shared a smiled with Coil. "Then we will have to keep kissing you," he said with a wider smile toward Crimson. "And more." He wiggled his eyebrows. Crimson blushed.

"I can't wait to kiss her, you fortunate frinx," Coil mumbled as they walked down the corridor toward their new quarters.

When they reached the door to the cabin Crimson suddenly cried out and tried to curl up in Teclis's arms. He again lowered his head and kissed her sweet mouth, collecting her whimpers and trying to take her mind off her mating heat. She responded quickly and passionately.

Somewhere in the distance he heard the cabin door open. He hadn't even realized they had stepped into the cabin until he heard the door shut behind him and Crimson was ripped out of his arms. He opened his eyes to see Crimson now firmly wrapped around Coil's body, the two of them kissing. He laughed and followed the pair toward a room he hoped was the bedroom. 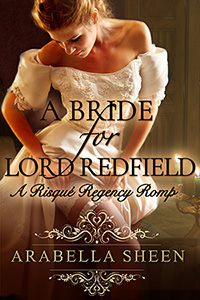 A Bride for Lord Redfield
Arabella Sheen
In Shelf
$3.99